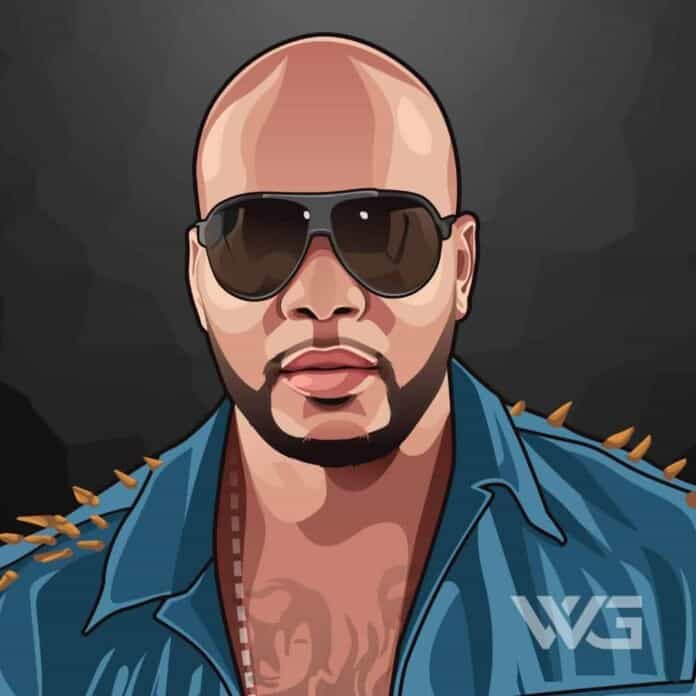 What is Flo Rida’s net worth?

As of January 2023, Flo Rida’s net worth is estimated to be roughly $30 Million.

His debut single ‘Low’ was number one for 10 weeks in the US and broke the record for download sales at the time of its release.

Tramar Lacel Dillard was born on the 17th of September, 1979, in Florida. Some of his sisters would sing in a local gospel group where he started to get his interest in music.

Flo Rida later joined a rap group called the GroundHoggz which was a three-man group.

Early on in his career one of his sisters, Julia passed away. Her death affected Flo Rida and his career, with him telling MTV “I was very close to her, and I told myself that I was going to do this for my sister”.

Flo Rida began his career with his brother-in-law which helped him to work as a hype man and backup rapper of Fresh Kid. He toured along with Ice in such capacity and went on to feature in several tracks of the latter’s album.

In 2007, Flo Rida released his first debut single which happened to become one of the bestselling hit ever ‘Low’. The song was written by himself and T-Pain, and it also featured in the blockbuster dance film ‘Step Up 2: The Streets’ (2008).

‘Low’ became a huge international hit climbing atop several national and international charts. Flo Rida’s debut album ‘Mail on Sunday’ was released in 2008 which generated three singles including ‘Low’, ‘Elevator’ and ‘In the Ayer’.

His fourth album ‘Wild Ones’ was released in 2012, and it reached at number 14 on the US Billboard 200 and topped the US Dance/ Electronic Albums. The other three singles of the album ‘Whistle’, ‘Wild Ones’ and ‘I Cry’ charted within top 10 of US Billboard Hot 100.

Here are some of the best highlights of Flo Rida’s career:

“The fact that I recorded this record so fast, it was almost like a freestyle. I think it probably took me less than an hour to do all the verses. That record reminds me so much of the Miami bass, so I was able to put my thing on it. And T-Pain having such a good melody on the hook, and me having some great melodies on the verses — the record just has so much ear candy [and] the lyricism was just amazing. When I heard, I just knew it was gonna be big, ’cause T-Pain was doing a lot of huge records at the time.” – Flo Rida

“It was amazing. High school friends, my family, fans, they all came out to Best Buy. DJ Khaled and Rick Ross came out, Cool & Dre. I signed autographs. It was just like, all the work that I put in prior, it was like a dream come true, just to see that support.” – Flo Rida

“Growing up in Miami, having these different cultures and being inspired in so many ways musically has let me have a very long career, ’cause just when you think I’m gonna do this type of record, I go and do something else. I think it’s the fact that I’m more like a chameleon who holds his ground.” – Flo Rida

“If I get in the studio, it’s very organic. I like to go off how I feel. I’m definitely not gonna stop making what got me to where I’m at or what inspires me. I’m just not sticking to one thing. I like to have fun with it.  – Flo Rida

“My drive. I live music. I am music. Throughout my day, I’m always thinking of different melodies, always listening to different genres of music, and I love it.”  – Flo Rida

How much is Flo Rida worth?

Flo Rida’s net worth is estimated to be $30 Million.

How old is Flo Rida?

How tall is Flo Rida?

There’s no doubt that Flo Rida’s net worth will continue to increase in his next years as a successful rapper and singer. The list of his work is long, and he has sold millions of copies of his music worldwide.

As of January 2023, Flo Rida’s net worth is estimated to be roughly $30 Million. Flo Rida is currently 38 years old.

What do you think about Flo Rida’s net worth? Leave a comment below.