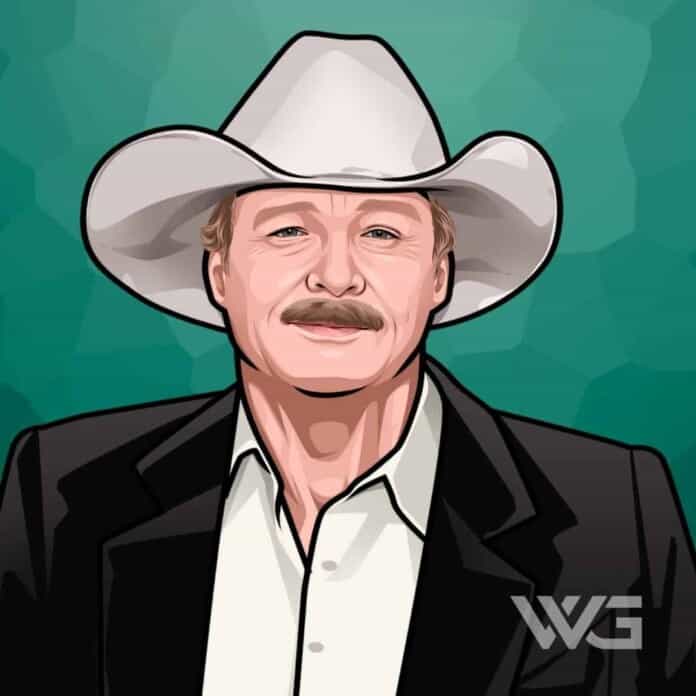 What is Alan Jackson’s net worth?

Alan Jackson is an American country music singer-songwriter with over 75 million record sales throughout his career.

He grew up listening to gospel music, with a friend introducing him to Hank Williams jr, John Anderson, and Gene Watson.

After attending Elm Street Elementary and Newnan High School, Jackson joined the band Dixie Steel, moving to Nashville, Tennessee with his wife when he was 27.

After working in the mailroom of The Nashville Network, Jackson signed to Artista Records and released his debut album, Here in the Real World, in 1990.

The album was certified double platinum and included several hit singles, with his following albums all certified platinum several times over.

Between 2000 and 2008, Jackson’s albums sold millions of copies worldwide, and he earned his first Grammy award in 2001 for the single, Where Were You (When the World Stopped Turning).

His latest album, 2021’s Where Have You Gone, reached number two on the Top Country Albums chart, marking his 21st studio album to date.

Alan Jackson’s songs have been featured in many movies, including the Seth MacFarlane comedy, A Million Ways to Die in the West, and Home Alone 2: Lost in New York.

The song Country Boy was used in the film Unstoppable, starring Denzel Washington and Chris Pine.

Alan Jackson has earned considerable income throughout his career through his many album sales and sell-out tours.

Alan Jackson’s net worth has continued to grow throughout his career, as additional albums and singles have sold millions of copies.

His early career in the 1990s saw the singer sell many multiple platinum albums, with several charting at first place in the Country Music charts.

He has released music as recently as 2021, ensuring his income – and net worth – will continue to increase through additional sales and royalties.

Alan Jackson married his high school sweetheart, Denise Jackson, in 1979, with whom he has several daughters, Mattie, Alexandra, and Dani.

He was known for his close friendship with country singer George Jones, who appeared in the music videos for Murder on Music Row and Don’t Rock the Jukebox.

After several decades working in the music industry, Alan Jackson has been widely recognized by multiple award ceremonies for his contributions to country music.

Here are some highlights from Alan Jackson’s career:

How Does Alan Jackson Spend His Money?

Alan Jackson’s impressive real estate portfolio features properties comparable to some of the most expensive houses in the world, including a mansion he listed for an eye-watering $38 million.

Another home in Franklin, Tennessee, was listed for sale at $23 million and included five bedrooms, eight bathrooms, and 120 acres of private land.

He also has an impressive collection of classic cars, including a 1968 Shelby GT 500 KR and a 1970 Chevelle SS 396 Convertible.

Alan Jackson has enjoyed a hugely successful career, quickly establishing himself as one of America’s leading country music performers and selling millions of copies of singles and albums.

Here are some of the best highlights of Alan Jackson’s career:

With his impressive track record as one of the most celebrated country singers of his time, Alan Jackson has plenty of insights into the nature of the music industry.

Here are our favorite quotes from Alan Jackson:

Now that you know all about Alan Jackson’s net worth let’s examine some of the ways his life and career can help us to lead more successful lives.

Here are some of the best success lessons to learn from Alan Jackson:

1. You Can Achieve Great Things By Blending The Old With The New

Alan Jackson caused a stir in the country music scene with his combination of honky-tonk and mainstream country-pop sounds.

The gambit paid off, with his records proving to be huge hits and earning him millions of country music fans.

2. Don’t Be Afraid To Move To Where The Action Is

Jackson realized early in his career that Nashville was the hot place to be for aspiring country music singers.

He moved there at the first opportunity, quickly finding a career in the music industry before rising to fame and fortune.

3. Aim To Be As Prolific As Possible In Whatever You Do

With over 20 albums to his credit and a long lineup of tour dates, Jackson’s career shows how hard work and a consistent approach to creativity can pay huge dividends.

So there you have it, our complete guide to Alan Jackson’s net worth, exploring his career highlights and record sales.

The recipient of multiple awards and accolades over his career, Jackson has won an impressive 19 Academy of Country Music Awards and 16 Country Music Association Awards.

With his record sales continuing to bring in royalties, Jackson’s net worth is likely to grow, so check back on this article in the future for the latest updated information.

What do you think about Alan Jackson’s net worth? Leave a comment below.

What is Sandra Lee's net worth?  Introduction  Sandra Lee is a...