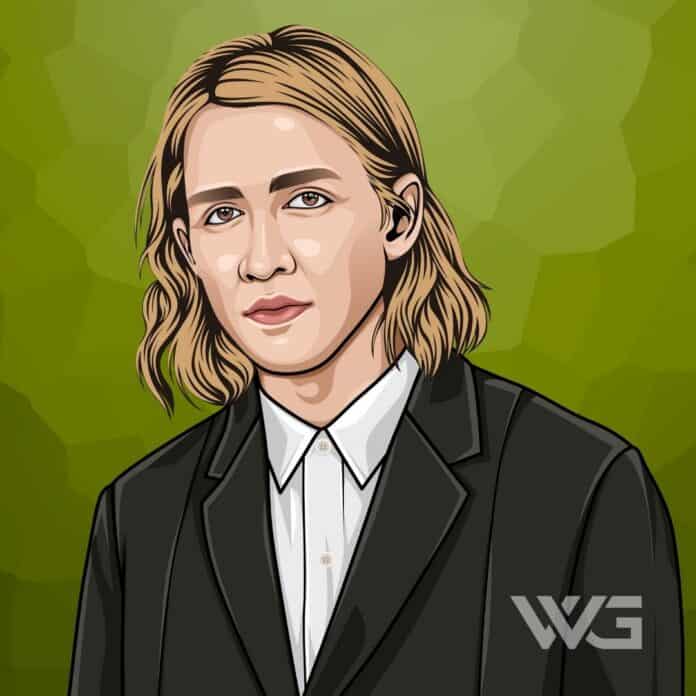 What is Porter Robinson’s net worth?

Porter Robinson is an American DJ, record producer, singer, and musician known for his EDM singles, albums, and performances at popular music festivals.

One of the most popular DJs of his generation, he’s been regularly featured on DJ Magazine’s top 100 DJs lists throughout his career.

As of January 2023, Porter Robinson’s net worth is estimated to be $20 Million.

Porter Weston Robinson was born July 15, 1992, in Atlanta, Georgia, the second of four boys in the family, along with younger brothers Robert and Mark.

He was accepted into UNC, where his parents were alumni, but declined to attend as his music career began to take off.

As a teenager, he befriended fellow music producers and DJs Madeon and Dillon Francis, with whom he has since collaborated on music projects.

In 2010, he began to release music under his own name, securing a deal with Skrillex and getting a one-EP deal with his label Owsla.

The success of Spitfire, which hit number one on the iTunes dance chart in 2011 and garnered millions of downloads elsewhere, launched Robinson into the spotlight.

His single Language was released through the Ministry of Sound label, home to artists such as including Marshmello, Pete Tong, and Adam Beyer, among other notable names in the EDM scene.

Outside of the studio, Porter Robinson performed his DJ sets at prestigious clubs in some of the most expensive cities in the world, as well as at the biggest international festivals.

He released his debut album Worlds through the Astralwerks and Virgin EMI labels in 2014 and redefined live shows with his Virtual Self show in 2017.

The success of his single Ghost Voices significantly enhanced his earning capacity, paving the way for additional success.

With more singles and albums in the pipeline, Robinson will undoubtedly continue to bring in an impressive salary over the years to come.

Porter Robinson’s profile both as a producer and DJ has helped him expand his net worth since he began producing music in 2005.

Awards nominations and wins have catapulted him towards becoming one of the richest DJs in the world, with future collaborations likely to raise his profile further.

As he continues to receive royalties from his expanding discography, his wealth and assets will continue to increase.

Porter Robinson began dating Rika Mikuriya in 2017, with the couple announcing their engagement in 2022.

A dedicated Japanophile, Robinson has expressed his love for all things Japanese and cites video games such as Dance Dance Revolution is core influences on his style.

Despite his relatively short time as a professional music producer and DJ, Porter Robinson has gained the attention of some of the most notable organizations in the industry.

His promising career has seen him pick up prestigious nominations that suggest a bright future for the young DJ.

Here are some of the notable awards and nominations from Porter Robinson’s career:

As his career continues to develop and he gains new fans, we can expect Robinson to pick up more high-profile nominations and awards.

How Does Porter Robinson Spend His Money?

Porter Robinson’s growing income and net worth have allowed him to improve his lifestyle over the years.

Robinson owns a property in the Chapel Hill area of North Carolina, home to other notable residents, including Michael Jordan and the novelist John Grisham.

An enthusiastic gamer, he also spends much of his time and money playing video games, notably those made by the leading developers from Japan.

Active since 2005, Porter Robinson has enjoyed a hugely successful career with many high points worth noting.

He has worked with some of the best acts in the EDM world, performing at many of the top venues in America and worldwide.

Here are some of the best highlights of Porter Robinson’s career:

With more exciting projects and collaborations lined up in the future, we can anticipate plenty of other highlights as his career evolves.

Porter Robinson has conducted many interviews with the music press over the course of his career, sharing his insights into music production and live performances.

He has also elaborated on his passion for Japanese culture and why he enjoys playing video games.

Here are our favorite quotes from Porter Robinson:

Now that you know all about Porter Robinson’s net worth, we’ll dive into some of the amazing lessons on life and creativity we can learn from his professional experiences.

Here are some of the best success lessons to learn from Porter Robinson:

1. Don’t Be Afraid To Take Influences From Unusual Places

Many EDM producers and DJs look to other artists in the industry for inspiration, but Porter Robinson prefers to cast a wider net.

Whether you’re a music producer or visual artist, the best way to explore happy accidents is to approach the craft with bold and experimental ideas.

It’s only when you step outside your comfort zone that happy accidents will happen and new sounds develop.

3. Try Something New Instead Of Repeating Yourself

It can be tempting to stick to a particular style if it gets a good response, sticking to the old adage, “If it ain’t broke, don’t fix it.”

Robinson prefers to try something new, believing that you can never authentically do the same thing twice.

So there you have it, our comprehensive article exploring the music releases, live shows, and net worth of American EDM star Porter Robinson.

With his career just starting, Robinson will undoubtedly continue to impress critics and fans as he releases more singles and albums.

We’ll be updating this article to bring you all the details you need to know about Robinson’s latest ventures, so be sure to check back again in the future.

As of January 2023, Porter Robinson’s net worth is estimated to be $20 Million.

What do you think about Porter Robinson’s net worth? Leave a comment below.

Robert Williams III has given the Boston Celtics what they expected from a late first round draft pick and they've rewarded him with a life-changing contract.