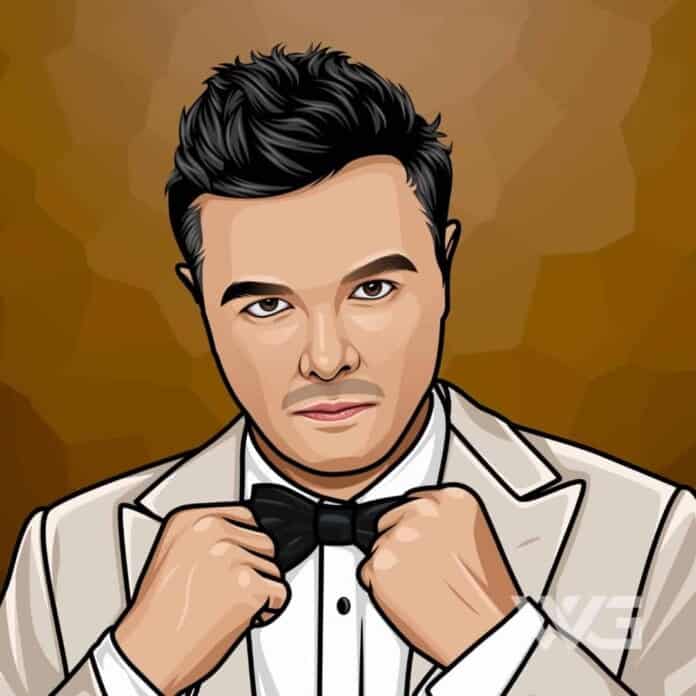 What is Seth MacFarlane’s net worth?

Seth MacFarlane is an American actor and comedian.

MacFarlane is best known for being the creator of the series ‘Family Guy’, ‘The Orville’, ‘American Dad!’ and ‘The Cleveland Show.’ He has starred in several films such as ‘Ted,’ ‘Ted 2’, and ‘A Million Ways to Die in the West.’

As of February 2023, Seth MacFarlane’s net worth is estimated to be roughly $300 Million.

Seth MacFarlane was born on the 26th of October, 1973, in Connecticut.

His father was a school teacher, while his mother was an admissions officer. His sister, Rachel Ann MacFarlane, grew up to be a voice actor.

MacFarlane completes his schooling in 1991 at Ken School. He then pursued his passion for animation and filming at the ‘Rhode Island School of Design’ where he earned a bachelor in fine arts degree.

MacFarlane created a film titled ‘The Life of Larry’ during his finals year at Rhode Island School of Design. He later was hired by ‘Hanna-Barbera’ in 1995.

At ‘Hanna-Barbera,’ he began to work on Cartoon Network’s series and received roles between being a writer and storyboard artist. He worked on many cartoon series such as ‘Dexter’s Laboratory,’ ‘Johnny Bravo,’ ‘I Am Weasel,’ and ‘Cow and Chicken.’

He also worked as a freelancer for ‘Nelvana Limited’ and ‘Walt Disney Television Animation.’ In 1996, MacFarlane made ‘Larry & Steve’, the sequel to ‘The Life of Larry.’

MacFarlane’s huge breakthrough came when he first pitched the television series ‘Family Guy.’ In 1998, Fox Broadcasting Company purchased the series, and MacFarlane became the youngest executive producer to pitch a television series at the age of 24.

MacFarlane began creating his next sitcoms, ‘The Cleveland Show’ and The Winner ‘in 2007. The show had its premiere two years later in 2009.

How Does Seth MacFarlane Spend His Money?

There is no doubt that Seth MacFarlane is one of the most successful animators in history. His net worth reflects his success as it has been estimated to be a net worth of $300 Million. In 2015, it was reported that he earned around $20 million a year.

MacFarlane is a proud owner of a Malibu beach house worth $15 million. This beach home comes with five bedrooms, six bathrooms, a two-car garage, and a gourmet kitchen. The home also features other amenities such as a wine cellar, a master suite, and a sauna.

MacFarlane has a nice collection of cars in his garage. One of his most notable purchases is a black convertible Masarati.

Here are some of the best highlights of Seth MacFarlane’s career:

“I do not believe in God. I’m an atheist. I consider myself a critical thinker, and it fascinates me that in the 21st century, most people still believe in, as George Carlin puts it, ‘the invisible man living in the sky’” – Seth MacFarlane

“There were two things that became apparent, pretty quickly into the process. One was that the muscles didn’t take as much reconditioning as I thought they would. It was more like voice acting than I thought it would be. You’re using your whole body, and some things are different, but when you are doing a character, even in the booth, nobody is watching, but my face will do different things when I do different characters.” – Seth MacFarlane

“From a writing standpoint, maybe television is a little more satisfying because it’s not all hinging on one thing. You can experiment, week to week, and you can be a little narrower in your scope one week and then be a little broader the next week. But with film, everything can look the way you want it to look. You can really sculpt the final product. So from a directorial standpoint, the film is more satisfying. But, they’re both forms of media that I’d like to keep involvement in.” – Seth MacFarlane

“I always thought it would be funny to have the Parents Television Council write an episode of ‘Family Guy’ and give them full creative control. Then see how good the episode is. That’s something we’ve actually discussed in the writers’ room. We haven’t proposed it yet, but if somebody from the PTC reads this, it might be worth discussing.” – Seth MacFarlane

Now that you know all about Seth MacFarlane’s net worth and how he achieved success; let’s take a look at some of the best lessons we can learn from him about life:

There have to be people who are vocal about the advancement of knowledge over faith.

Believe it or not, MacFarlane has about the same success rate as anyone else. Sometimes you hit, sometimes you miss.

The problem with the cable networks is the lack of money, not from personal income, but to show the budget.

How much is Seth MacFarlane worth?

Seth MacFarlane’s net worth is estimated to be $300 Million.

How old is Seth MacFarlane?

How tall is Seth MacFarlane?

Seth MacFarlane is a popular American personality whose work has been spread over different genres.

Animation has been a huge passion for him since he was young. He started to draw cartoon characters when he only was 2 years old. The interest of his passion made him a cartoonist with a local newspaper.

Today, MacFarlane is one of the richest cartoonists and comedians, and he is best known for his work on ‘Family Guy.’

What do you think about Seth MacFarlane’s net worth? Leave a comment below.