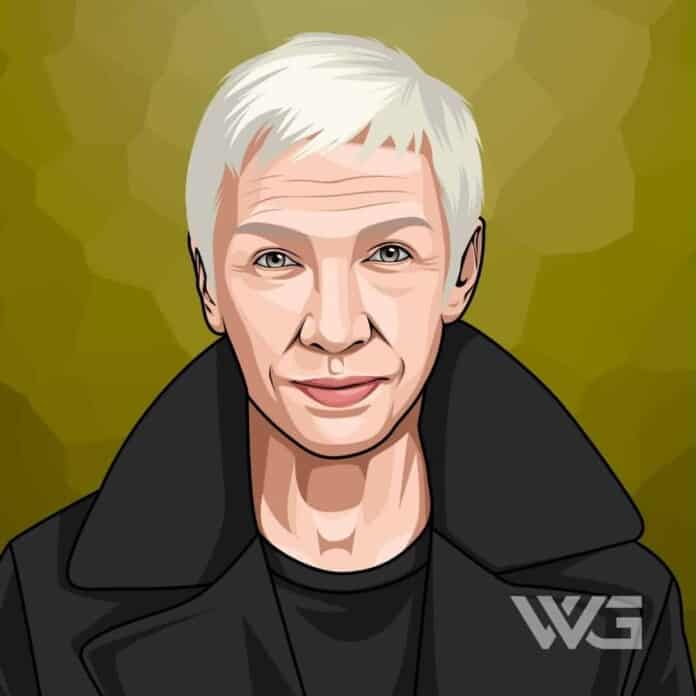 What is Annie Lennox’s net worth?

Ann Lennox is a Scottish singer-songwriter, political activist and philanthropist.

After achieving moderate success in the late 1970s as part of the new wave band The Tourists, she and fellow musician Dave Stewart went on to achieve international success in the 1980s as Eurythmics.

As of February 2023, Annie Lennox’s net worth is estimated to be roughly $60 Million.

She displayed an early interest in music and her parents arranged for her to receive piano lessons when she was seven. She went to Aberdeen High School for Girls.

Lennox started her musical career as a flautist with a band called Dragon’s Playground in 1976. Then she joined a group, The Tourists, where she was the lead singer from 1977 to 1980.

She met fellow musician David Stewart during this time. After the break up of The Tourists, David and Annie formed their own musical duo known as the Eurythmics in 1980 and released their first album, ‘In the Garden’ in 1981.

The duo brought out its second album, ‘Sweet Dreams (Are Made of This)’ in 1983. This proved to be a commercial breakthrough for the group which had been struggling for the past two years.

In 1998, Annie and her former partner David performed together at a record company party after being apart for eight years.

In 2007, she brought out her album ‘Songs of Mass Destruction’ which debuted at No.7 in the U.K. She embarked on a primarily North American tour called ‘Annie Lennox Sing’ in October-November 2007 which included 18 stops.

Here are some of the best highlights of Annie Lennox’s career:

“Such is the scale and depth of poverty in many parts of the world that it won’t be ended overnight. That is why if, like me, you want to see an end to poverty, you need to be in it for the long haul.” – Annie Lennox

“I’m appalled that the word ‘feminism’ has been denigrated to a place of almost ridicule and I very passionately believe the world needs to be revalued and reintroduced with power and understanding that this is a global picture. It isn’t about us and them.” – Annie Lennox

“The general population still thinks HIV is something that came in the 80s and went away, or that it only affects the gay population or intravenous drug users.” – Annie Lennox

“I can’t understand why the front pages of newspapers can cover bird flu and swine flu and everybody is up in arms about that and we still haven’t really woken up to the fact that so many women in sub-Saharan Africa – 60 percent of people in – infected with HIV are women.” – Annie Lennox

“Life is not quantifiable in terms of age, but I suppose in my fifties I am more grounded and more at ease in my own skin than when I was younger. I have confidence that I didn’t have before from the experiences I’ve had.” – Annie Lennox

Now that you know all about Annie Lennox’s net worth, and how she achieved success; let’s take a look at some of the lessons we can learn from her:

Take charge of your life, seek the best of yourself.

You’re only as powerful as the person walking beside you.

Explore the eternity of your existence.

How much is Annie Lennox worth?

Annie Lennox’s net worth is estimated to be $60 Million.

How old is Annie Lennox?

How tall is Annie Lennox?

Annie Lennox is a singer known for her innovative musical style and sweet, melodious voice which enabled her to become one of the most loved female British singers of contemporary times.

She rose to prominence as a musician when she collaborated with fellow singer David A. Stewart to form the duo Eurythmics.

As of February 2023, Annie Lennox’s net worth is estimated to be $60 Million.

What do you think about Annie Lennox net worth? Leave a comment below.