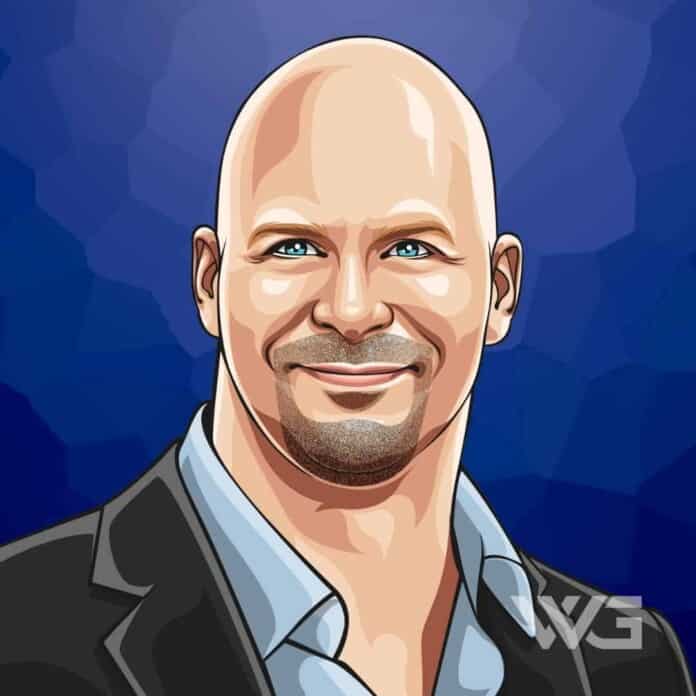 What is Steve Austin’s net worth?

As of November 2022, Steve Austin’s net worth is estimated to be $30 Million.

Steve Austin was born on the 18th of December, 1964, in Austin, Texas. Austin is the son of James and Beverly Anderson. Austin adopted his stepfather’s surname and later, legally changed his name to Steven James Williams.

Kevin is less than a year younger, and Austin has hypothesized in his autobiography that their father may have left because he could not handle another child so soon. Austin spent most of his childhood in Edna, Texas.

He finally joined ‘WCW’ and adopted the nickname “Stunning.” He made his ‘WCW’ debut in 1991, where he defeated Bobby Eaton and won his first ‘WCW World Television Championship.

In 1993, he became the tag-team partner of Brian Pillman and called their team ‘The Hollywood Blonds.’ They also won the ‘WCW Tag Team Championship’ and held the title for five months.

He had his debut match on January 15, against Matt Hardy. The match ended in Hardy’s defeat. He started wrestling as “The Ringmaster,” but later shaved his head, grew a goatee, and adopted the name “Stone Cold.”

He also entered into a feud with Owen Hart later. He got a chance to win the ‘WWF Tag Team Championship’ and the ‘Intercontinental Championship.’ However, due to an injury, he had to give up both the championships.

From 2003 to 2004, he slipped into his non-wrestling role as the “Sheriff” of ‘Raw.’ After being on and off the screen for a while, Austin finally parted ways with ‘WWE.’

His last appearance was in January 2018, on ‘Raw’s 25th anniversary. He performed a “Stone Cold Stunner” on Vince McMahon and Shane McMahon.

Here are some of the best highlights of Steve Austin’s career:

“I used to love Andre The Giant. I could sit around all day and listen to Andre stories. He was such a wonderful, unique guy who everyone loved being around. The thing about Andre, he just had this magical mystique about him.” – Steve Austin

“You’re in there, you’re having a match, and you’re feeding off that crowd. That’s the gasoline that fuels the match, and that’s how you make your decisions. If you’re not listening to that crowd when you’re working, you’re missing the biggest part of what working is all about.” – Steve Austin

“It’s like I tell everybody, if you get a chance to win the Royal Rumble or the King of the Ring back when they had it, that means you’re gonna get a push. You getting an opportunity at something big, and it can really set up your future for you. So if you’re that guy, boy, it’s pressure.” – Steve Austin

“There are so many things I want to accomplish in the world of acting. But, the two most important are that I want to keep paying the bills and I want to get better. That’s about it. I enjoy what I do. I’ll stay busy. I’ve been lucky.” – Steve Austin

Now that you know all about Steve Austin’s net worth, and how he achieved success; let’s take a look at some of the best lessons we can learn from him:

This can be applied to any walk of life. Whenever you face a situation, always weigh up all the possible outcomes before diving straight in there.

With Stone Cold, the outcome always circulated around someone getting their a** handed to them, but your not Stone Cold so a different approach is required. Always plan ahead. Try to ensure that when you attack a situation head on that you have a plan. This is where Austin would go through his ‘fixin’ up’ phase.

2. Enjoy Exercising & Do Lots Of It

Obviously, on the face of things, this is yet another way of Stone Cold telling you that he is going to kick your a**. But there is a lot more you can take from these words of wisdom.

Stomping is a magnificent form of exercise that is highly underrated in fitness circles the world over. It’ll do your upper legs and core the power of good. It is something that Stone Cold attributed to the fine physique he sported throughout his career.

3. Believe In Yourself & Your Own Abilities. You Can Do Anything

While Stone Cold was living his WWE life with eyes in the back of his head he was also promoting the most motivational of messages without even knowing it. You shouldn’t trust anyone to do anything you want doing. While you also shouldn’t always trust what people are telling you.

But the first part of this message is a more valuable lesson in how to go about your ‘biznatch’.

If you dive too deep into the latter part of that analysis you’ll turn into the paranoid, almost schizophrenic Austin of 2001… So yes, always believe in yourself. You CAN do anything that anyone else is capable of doing.

How much is Steve Austin worth?

Steve Austin’s net worth is estimated to be $30 Million.

How old is Steve Austin?

How tall is Steve Austin?

Steven Austin is one of the most popular American wrestlers of all time. Austin, who is also an actor and a TV host, has now retired from the world of wrestling.

What do you think about Steve Austin’s net worth? Leave a comment below.