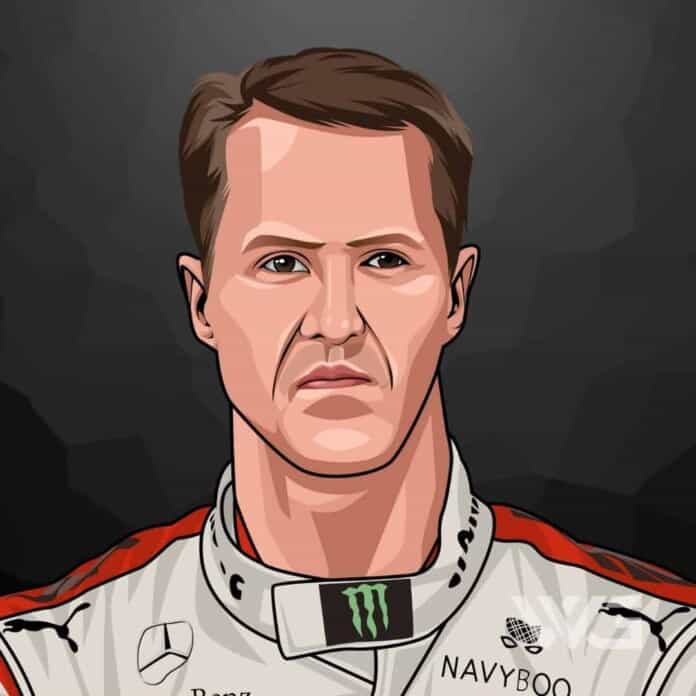 What is Michael Schumacher’s net worth?

As of February 2023, Michael Schumacher’s net worth is roughly $600 Million.

Michael Schumacher is a retired German racing driver who raced in Formula One for Jordan Grand Prix, Benetton and Ferrari, where he spent most of his career.

Michael Schumacher was born on the 3rd of January, 1969, in the town of Hürth, North Rhine-Westphalia, Germany. When he was young, he showed interest in racing, and his parents encouraged him by building him his own kart.

In 1982, a young Schumacher won the ‘German Junior Kart Championship.’ The following year, he was given his driving license at the age of 14.

The following year, the young driver competed in a ‘Formula One’ race for the ‘Jordan Grand Prix’ team, and finished seventh. The same year, he placed fifth in the ‘Italian Grand Prix,’ defeating Nelson Piquet.

The same year, at the ‘Australian Grand Prix,’ the racer was involved in an accident with British racer Damon Hill. Subsequently, the English media blamed Schumacher for the incident

In the 2005 ‘Formula One’ championship, the rules were changed with drivers allowed to use only one set of tires for the entire race.

The only competition that Schumacher won in the 2005 season was the ‘United States Grand Prix,’ where he finished third, scoring a total of 62 points.

Here are some of the best highlights of Michael Schumacher’s career:

“Those who have come into Formula One without experiencing cars devoid of electronic aids will find it tough. To control 800 horse power relying just on arm muscles and foot sensitivity can turn out to be a dangerous exercise.” – Michael Schumacher

“I don’t feel like promising big things to my fans. I’m not thinking about victory at all. I’ll do my best to get on the podium at least, although I must admit I feel fairly pessimistic.” – Michael Schumacher

“I retired simply because I didn’t have the passion and motivation anymore; I was tired. At the time I thought, ‘Well, I had a great time, there is the end.’ At some moment, there is the right time to call it an end.” – Michael Schumacher

“People get excited around me and behave differently than they would normally. I don’t feel different from anyone else, except that I drive a racing car round in circles faster than somebody else.” – Michael Schumacher

Now that you know all about Michael Schumacher’s net worth, and how he achieved success; let’s take a look at some of the lessons we can learn from him:

In all you do, make sure you give it your all. When this becomes a habit you will notice a huge difference in your life.

Even the smallest glimpse of hope should be enough for you to keep moving forward. Never, ever give up.

Be the example you want to see in the world. Be humble and yet be passionate about success.

How much is Michael Schumacher worth?

Michael Schumacher’s net worth is estimated to be $600 Million.

How old is Michael Schumacher?

Michael Schumacher was born on January 3, 1969, and is currently 54 years old.

How tall is Michael Schumacher?

Michael Schumacher is a famous ‘Formula One’ racer who developed a passion for the sport at a very young age. He was the face of ‘Ferrari’ for more than ten years. He won the ‘Formula One’ championship on seven occasions, scoring high points in almost all the races in every season.

As of February 2023, Michael Schumacher’s net worth is roughly $600 Million.

What do you think about Michael Schumacher’s net worth? Leave a comment below.