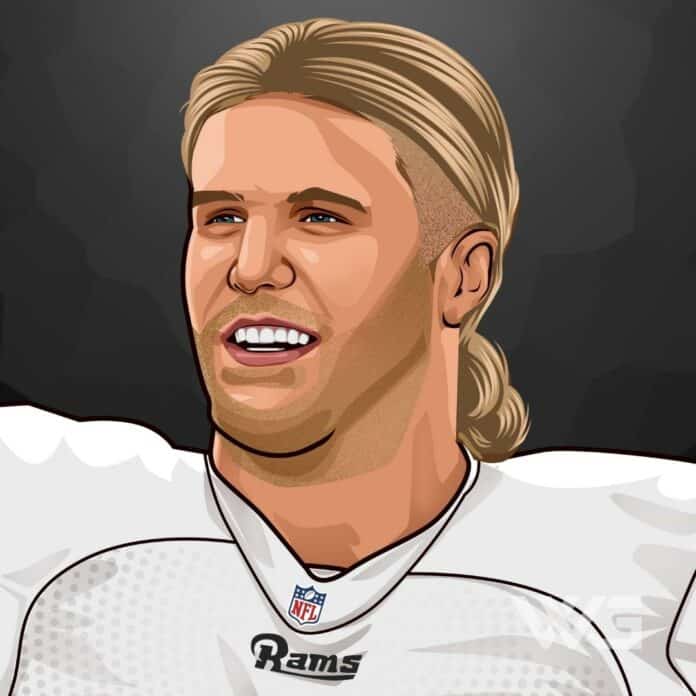 What is Clay Matthews’ net worth?

Clay Matthews has earned millions as one of the best outside linebackers in the NFL, and he holds the Green Bay Packers record for the most sacks in a single postseason.

While he has since officially retired, we may very well see more from him in the future as an analyst or commentator, given how skilled he is as a player.

Clay Matthews III was born May 14, 1986, in Los Angeles, California, to Leslie and Clay Matthews Jr., a professional football player.

Hailing from a family of footballers, Clay’s father played for the Cleveland Browns and the Atlanta Falcons, while his grandfather, Clay Matthews Sr., played for the San Francisco 49ers.

Growing up, Clay attended Agoura High School, where he played for the Chargers, and started looking into Division I FCS schools for college.

Following in the footsteps of his father and grandfather, Clay opted to attend the University of Southern California, where he hoped to become a walk-on for the Trojans.

While at the University of Southern California, Clay played for the Trojans from 2004 to 2008, and due to his skills on the field, he was granted a full athletic scholarship starting in 2006.

In his final year with the Trojans, Clay was given USC’s Co-Special Teams Player of the Year award and was considered a top prospect for the 2009 NFL draft.

Clay Matthews was drafted by the Green Bay Packers in 2009, and he scored his first career touchdown on October 5th of the same year.

During his first season, Matthews quickly established himself as one of the best players on the field, and the following year he earned a spot on the 2010 Pro Bowl NFC Squad.

In 2010, he had already set the Packer’s record for the most sacks in a single postseason and earned the title of Super Bowl Champion after defeating the Pittsburgh Steelers.

The next season, Matthews finished with 50 tackles, and he managed his third defensive touchdown, picking off the younger brother of Payton Manning, Eli, for a pick-six.

During the 2012 season, Matthews became one of only six NFL players to record six or more sacks in the first two season games.

Clay Matthews continued to play well until 2018, when he left the Green Bay Packers to become an unrestricted free agent, a move he would later say that he regretted.

In 2019, Matthews joined the Los Angeles Rams, signing a two-year contract with them, though he did not play during the 2020 season.

While the Denver Broncos attempted to negotiate a contract with him in 2020, both sides failed to come to an agreement, and by 2022, Matthews officially announced his retirement.

While he never earned enough to be considered one of the richest NFL players in the world, Clay Matthews has earned more during his career than most people will in a lifetime!

Some of Clay Matthews’ annual career earnings include:

He might not be the wealthiest on the field, but seeing as he’s earned more than T.Y Hilton and Melvin Gordon combined, we’d say he’s done pretty well for himself.

Clay Matthews married Casey Noble in 2015, and together they have three children; William Clay IV, Colton, and Madeline.

Outside of his family life, Matthews is active in the sports memorabilia circuit, and he often sells game-used equipment through the site Fanatics or signs autographs exclusively through Waukesha Sportscards.

Clay Matthews has received many distinctions and awards during his 11-year career in the NFL as an outside linebacker.

While none of his achievements should be discounted, a few of them have been particularly significant.

Here are some of the best accomplishments of Clay Matthews’ career:

He may not be as mainstream as Tom Brady, but Clay Matthews has certainly won his fair share of awards and accolades during his time with the NFL.

How Does Clay Matthews Spend His Money?

Fans got a glimpse of Clay Matthews’ luxurious lifestyle when he listed his massive mansion in Calabasas, California.

Matthews originally bought the land for $2.6 million in 2015 and finished building his mansion on it in 2020.

This home is spectacular, to say the least, and it encompasses 14,021 sqft, with seven bedrooms and 11 bathrooms.

There is even a private theater, a spa, a pool, a sports court, a goldfish pond, a rose garden, and a garage large enough for a huge car collection.

We’re not sure why Matthews built this mansion only to sell it a year later, but we suppose if he does find a wealthy buyer, his net worth will get a huge boost!

Clay Matthews has reached many impressive milestones during his career that have allowed him to achieve his fortune.

However, some particular points stand out for their impact on his success and overall net worth.

Here are some of the best highlights of Clay Matthews’ career:

While there have been many memorable moments throughout Clay Matthews’ career, these are the ones that defined his success the most.

Clay Matthews strives to be the best, and he doesn’t let anything get in his way.

After spending 11 years in the NFL, Matthews has a lot to say about reaching his goals.

Here are our favorite quotes from Clay Matthews:

There is a lot that we can learn from Clay Matthews and his impressive career.

Now that you know all about Clay Matthews’ net worth, let’s take a closer look at what he can teach us about reaching our own success.

Here are some of the best success lessons to learn from Clay Matthews:

1. Surround Yourself With Success

If you want to be successful, it stands to reason that you would want to surround yourself with people in the same boat.

Make connections, talk to people in the same field as you, and build a support net worth that can help you achieve your goals.

2. Take Pride In Your Work

If you’re not taking pride in your work, you’re either really humble or not giving it your all.

You should always strive to take pride in what you do; just make sure not to let it go to your head.

3. Don’t Let Anything Get In Your Way

If you really want to become successful, you need to make sure nothing can hold you back.

Don’t let yourself get burdened by setbacks or failures; keep moving forward until you see the finish line, and then leave it in the dust.

Clay Matthews has left a lasting legacy in the NFL while also lining his pockets with a substantial amount of money.

While he has since retired, we may not have yet seen the last of Matthews, and it’s likely he’ll turn up as an analyst or commentator in the future.

Be sure to check back often to stay updated on any and all changes to Clay Matthews’ fortune.

What do you think about Clay Matthews’ net worth? Leave a comment below.