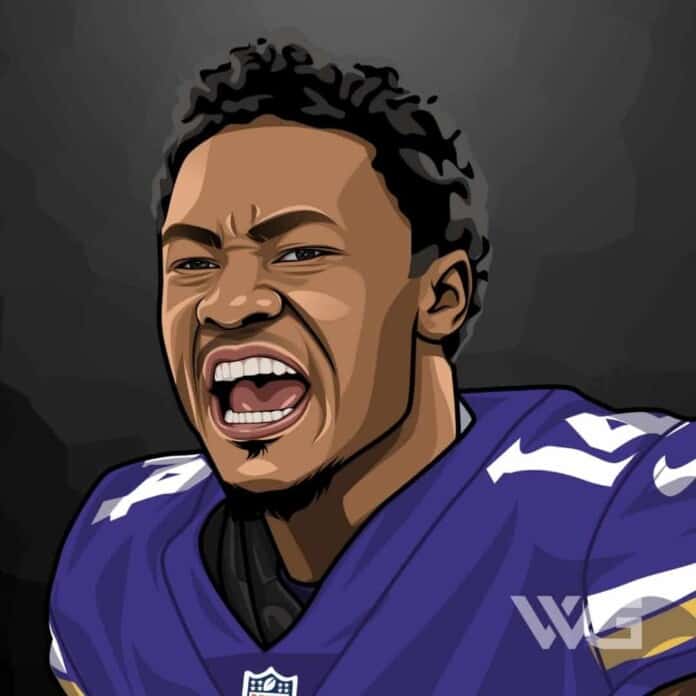 What is Stefon Diggs’ net worth?

Stefon Diggs is an American football wide receiver for the Minnesota Vikings of the NFL. Diggs was drafted by the Vikings in the fifth round of the 2015 NFL Draft. He played college football at Maryland.

Stefon Mar’Sean Diggs was born on the 29th of November, 1993, in Maryland. He attended Our Lady of Good Counsel High School in Montgomery County, Maryland, where he played football and ran track.

As a senior, he recorded 770 yards receiving and 8 touchdowns, and racked up 277 rushing yards and 3 more scores on the ground; he also saw time on defense, recording 31.5 tackles, 5.5 tackles for loss, and 1 sack.

In the season opener game at the Tennessee Titans on September 11, Diggs led the Vikings with seven catches for 103 yards on nine targets.

In week 2, Diggs posted another stellar performance against the Green Bay Packers on Sunday Night Football. With the Packers stacking the box to stop the running game, Diggs exploited man-to-man coverage from second-year cornerback Damarious Randall and became the focal point of the offense.

Diggs became only the third receiver in team history to have back-to-back 100-plus-yard games in the first two games of the season.

Here are some of the best highlights of Stefon Diggs’ career:

“I would say that my off-field style is unique in the sense that I’m not driven by trends. I like what I like; various styles, brands, designers, and I can create a cohesive look, mixing and matching pieces that are often not typically put together. I love mixing various color palettes and prints.” – Stefon Diggs

“I love the comfort and reliability that the tracksuit represents, but I also never miss the opportunity to style or enhance a look that is considered informal.” – Stefon Diggs

“I want to tell the world to take chances and express yourself individually, how you see fit. Be sure to incorporate your personality and what makes you unique when choosing your fit. I love planning my fits, for game day or any day.” – Stefon Diggs

Now that you know all about Stefon Diggs’ net worth, and how he achieved success; let’s take a look at some of the lessons we can learn from him:

You need three things to win: discipline, hard work and, before everything maybe, commitment. No one will make it without those three. Sport teaches you that.

It’s never late to go after your dreams. All it takes is believing.

No matter how talented you are or naturally gifted you are, there’s no substitute for hard work if you got to maintain standards.

How much is Stefon Diggs worth?

Stefon Diggs’ net worth is estimated to be $12.5 Million.

How old is Stefon Diggs?

How tall is Stefon Diggs?

Stefon Diggs is an American football wide receiver for the Minnesota Vikings of the National Football League.

He became the fastest Vikings WR to 200 receptions, catching his 200th in his 40th career game, breaking the record set by Randy Moss and Percy Harvin (42 games).

What do you think about Stefon Diggs’ net worth? Leave a comment below.