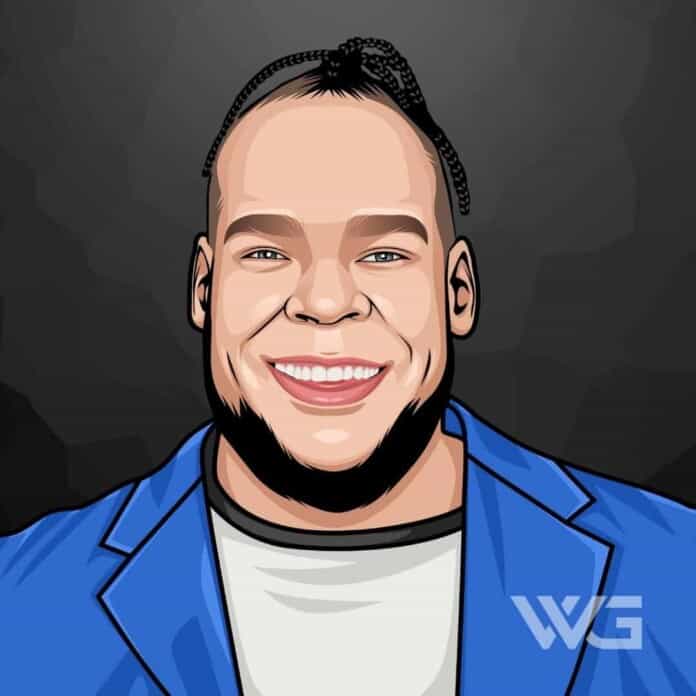 What is Tyrus’s net worth?

Tyrus is an American actor and professional wrestler. He is best known for his tenure in WWE as Brodus Clay.

After training in WWE’s farm territories, “Deep South Wrestling and Florida Championship Wrestling,” he debuted during the fourth season of WWE NXT.

Tyrus debuted on the main roster as his pro-Alberto Del Rio’s bodyguard.

He took part in several WWEK storylines and feuds until his departure in 2014. From 2014 to 2017, Tyrus wrestled in Total Nonstop Action Wrestling. He has appeared in the films ‘No One Lives, Scooby-Doo!’, ‘WrestleMania Mystery,’ and ‘Supercon.’

George Murdoch was born on the 21st of February, 1973, in Massachusetts. He disclosed a childhood incident in which his abusive father damaged his eye by hitting him. While Murdoch’s mother moved back to her parent’s home, he stated that he and his brother were not welcome there because their father was black.

Murdoch and his brother lived with a foster family for many years. The brothers eventually lived with their mother again, but he ended up leaving home at age 15. In 1990, he attended Quarts Hill High School in Los Angeles County, California. By 1995, he was attending the University of Nebraska at Kearney.

After signing a contract with World Wrestling Entertaiment, he was assigned to Deep South Wrestling, a WWE developmental territory. In 2006, he had his debut and began using the ring name G-Rilla along with adopting the gimmick of a street thug.

In his debut match, he drafted Big Bully Douglas. He re-signed with WWE and was assigned to FCW in 2010. He once again used the name G-Rilla and formed an alliance with The Uso Brothers, Tamina, and Donny Marlow.

Tyrus went on to defeat both Jacob Novak and Rudy Parker, before changing his ring name to Brodus Clay, a play on Snoop Dogg‘s real name Calvin Cordozar Broadus in 2010.

Over the next few weeks, he continued to squash various jobbers on Superstars. WWE ran vignettes promoting his return to television in 2011.

In 2014, Tyrus debuted for Total Nonstop Action Wrestling under the ring name Tyrus at TNA’s television tapings. After EC3 introduced him, he had his first wrestling match on the episode of Impact Wrestling against Shark Boy, which he won.

Together they entered the TNA World Tag Team Championship, defeating Eric Young and Rockstar Spud in the quarterfinals. He only loses to The Hardy Boys in the semifinals.

Here are some of the best highlights of Tyrus’ career:

“I think if I was like Fred Astaire out there or like break dance fighting and doing crazy splits and stuff like that, I think people would be like, ‘ehhhh, I’m just going to watch him,’ but the fact that they’re like, ‘I can do that,’ it’s fun, and I think they lose themselves.” – Tyrus

“Make America Great Again was a political slogan. It was used before, I believe Ronald Reagan used it before. It was about making America great and rallying America. Unfortunately, I would say 10 percent of the population that voted for President Trump has a different view. They have embraced it as ‘Make America White Again.” – Tyrus

“Vince McMahon said to Triple H, ‘Are you sure he’s a heel? I don’t know. He’s funny.’ He decided he wanted me to be a babyface, and when they came to me, they said, ‘You can say no, but here’s what we’re looking at. Funkasaurus is the fastest way to be back on TV.” – Tyrus

“John Cena actually showed up to do a song with Snoop in L.A., and he walked in and was like, ‘What the hell are you doing here?’ I was like, ‘You didn’t know? I got let go. I’m back bodyguarding now. He was like, ‘What? That’s crazy!’ I was like, ‘It’s all good. Good to see you. Appreciate it.” – Tyrus

“I never imagined as a kid that anybody could beat up ‘Mr. Wonderful’ Paul Orndorff because Gorilla Monsoon and Bobby Heenan convinced me he was the toughest guy, that Andre The Giant was bigger than life, that Hulk Hogan was amazing and dug down deep.” – Tyrus

Now that you know all about Tyrus’ net worth and how he achieved success; let’s take a look at some of the lessons we can learn from him:

If you commit to something, you believe it, and you have fun with it, people are going to respect that.

If you’re good at what you do regardless of what is thrown in front of you, you will make it work.

How much is Tyrus worth?

Tyrus’ net worth is estimated to be $2 Million.

How old is Tyrus?

How tall is Tyrus?

Tyrus is an American actor and professional wrestler. He is best known for wrestling in the WWE as Brodus Clay. He was born in Boston, Massachusetts.

What do you think about Tyrus’ net worth? Leave a comment below.