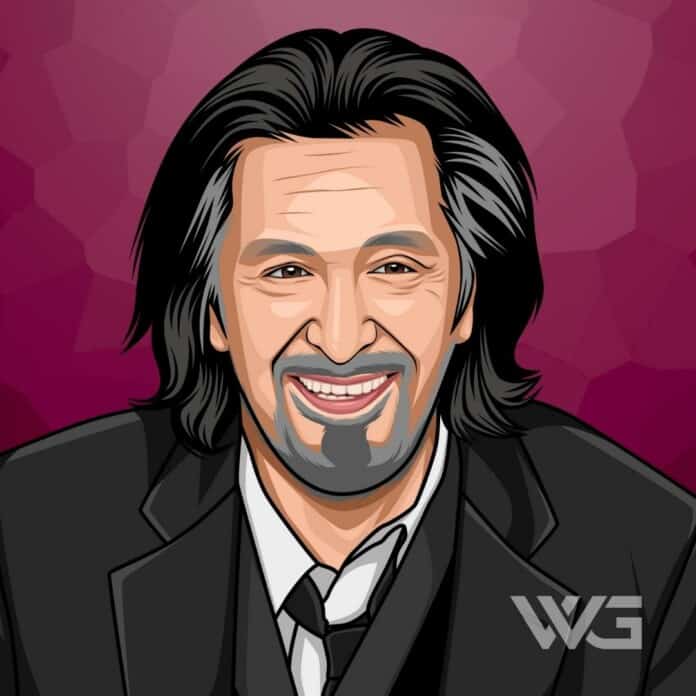 What is Al Pacino’s net worth?

As of February 2023, Al Pacino’s net worth is approximately $120 Million, making him one of the richest and most popular film icons in the movie industry.

Pacino has had a career spanning over five decades, during which time he has received numerous honors and accolades. Pacino is also one of few actors to have won an Oscar, an Emmy, and a Tony Award for acting.

His parents are of Italian American descent. Pacino’s parents divorced when only was 2 years old.

His mother later took him to The Bronx where they lived with her parents James and Kate Gerardi. Pacino’s father moved to Covina, California to work as a salesman.

Al Pacino aimed to become a baseball player in his teen years, and he was also nicknamed “The Actor”. He went to Herman Ridder Junior High School but dropped out at the age of 17.

After his dropout, he took low-paying jobs as a busboy, postal clerk, and messenger.

Al Pacino began his acting career in the theatre productions in 1969 where he performed in the Broadway play ‘Does A Tiger Wear a Necktie?’. He also played a minor role in the short film ‘Me, Natalie’. Al Pacino was cast as ‘Bobby’ in 1971 film ‘The Panic in Needle Park’.

His big breakthrough in his career came with the movie ‘The Godfather’ which was released in 1972. The movie received wide critical praise and won three Academy Awards.

The next year, he starred as Francis Lionel ‘Lion’ Delbuchi in ‘Scarecrow’. The following year Al Pacino also was nominated for an Academy Award for Best Actor for his role in ‘Serpico’.

In 1974, Al Pacino appeared in the sequel of the Godfather series, the Academy Award-winning ‘The Godfather’. His career slumped in the 1980s and his films were critically panned and were not successful commercially.

In 1990, he starred in the third and final Godfather film. He was nominated for Golden Globe for Best Actor thanks to his performance in the movie.

In the 90s he acted in many successful films such as ‘Frankie and Johnny’, ‘Glengarry Glen Ross’, ‘Scent of a Woman’, ‘Donnie Brasco’ and ‘The Devil’s Advocate’.

What is Al Pacino worth?

As of February 2023, Al Pacino’s net worth is $120 Million, and he has worked with stars such as Morgan Freeman, Robert De Niro, and Jamie Foxx.

Here are some of the best highlights of Al Pacino’s career:

“There is only one way of surviving all the early heartbreaks in this business. You must have a sense of humor. And I think it also helps if you are a dreamer. I had my dreams all right. And that is something no one can ever take away. They cost nothing, and they can be as real as you like to make them. You own your dreams and they are priceless. I’ve been a lavatory attendant, a theatre Usher, a panhandler, all for real. Now, as an actor, I can be a journalist today and a brain surgeon tomorrow. – Al Pacino

“Forget the career, do the work. If you feel what you are doing is online and you’re going someplace and you have a vision and you stay with it, eventually things will happen.” – Al Pacino

“You sharpen the human appetite to the point where it can split atoms with its desire; you build egos the size of cathedrals; fiber-optically connect the world to every eager impulse; grease even the dullest dreams with this dollar-green, gold-plated fantasies, until every human becomes an aspiring emperor, becomes his own God… and where can you go from there?” – Al Pacino

“We start to realize that there are anodynes in life that help us through the day. I don’t care if it’s a walk in the park, a look out the window, a good bubble bath – whatever. Even a meal you like, or a friend you want to call. That helps us solve all this stuff in our head.” – Al Pacino

“A lot of actors choose parts by the scripts, but I don’t trust reading the scripts that much. I try to get some friends together and read a script aloud. Sometimes I read scripts and record them and play them back to see if there’s a movie. It’s very evocative; it’s like a first cut because you hear ‘She walked to the door,’ and you visualize all these things. ‘She opens the door’ . . . because you read the stage directions, too.” – Al Pacino

Now that you know all about Al Pacino’s net worth, and how he achieved success; let’s take a look at some of the lessons we can learn from him:

1. If you get all tangled up, just tango on

When you’re stuck, surrender to being stuck and start enjoying. That will give you a mental stability to overcome your troubles in life.

2. Always tell the truth. Even when you lie

The truth always comes forward. It takes a lot of hard work to be something you aren’t. To act like something you don’t believe in or is not, at your core, who you truly are, is dishonest. That is the same thing as saying someone things that are not true.

Keep your enemies closer than your real friends. We can surely choose how to deal with them. We need to have a strategy in place to win the game with the competitor. But never hate them.

How much is Al Pacino worth?

Al Pacino’s net worth is estimated to be $120 Million.

How old is Al Pacino?

How tall is Al Pacino?

Al Pacino is the king of the movie industry. We all know him from the films ‘Godfather’ and ‘Scarface’ which impressed and sold millions worldwide.

As we known Al Pacino has also worked with some of the most talented actors in the world such as Diane Keaton, Michelle Pfeiffer, and Tony Roberts.

What do you think about Al Pacino’s net worth? Leave a comment below.