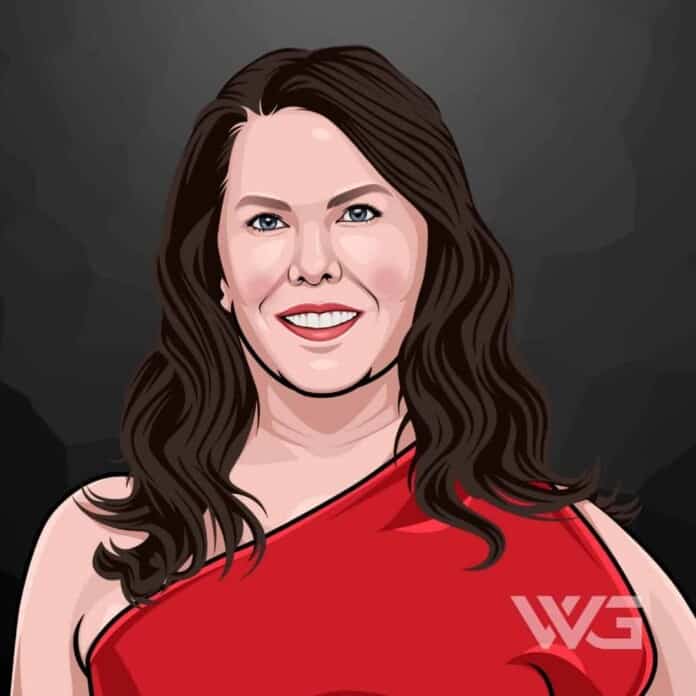 What is Lauren Graham’s net worth?

Lauren Graham is an American actress and author.

Graham is best known for her roles as Lorelai Gilmore on the television series ‘Gilmore Girls’ for which she received nominations for Screen Actors Guild, Golden Globe and Satellite Awards.

Her other film and television work include ‘Sweet November,’ ‘Bad Santa,’ ‘The Pacifier,’ ‘Because I Said So’ and ‘Evan Almighty.

Lauren Helen Graham was born on the 16th of March, 1967, in Honolulu, Hawaii.

Her mother was a fashion buyer, and her father is a candy industry lobbyist. Graham was raised in her father’s Catholic faith.

When her father worked for the United States Agency for International Development in Vietnam, she lived for a few years in Japan. When she was 5 years old, she moved to the Virginia suburbs of the Washington, DC metropolitan area with her father, who became a congressional staffer.

Graham’s role in ‘Good Company,’ ‘Townies,’ ‘Conrad Bloom’ all barely made out of the starting gate before they were canceled. Still, cancelation of the sitcom M.Y.O.B. turned out to be a blessing in disguise, as it left her free to take on what would turn out to be her most notable role to date in a new series called ‘Gilmore Girls’ in 2000.

The show was a concept which chronicled the lives of single mother Lorelai Gilmore and her daughter Rory. The two were more like sisters than the traditional mother-daughter dynamic.

She received several accolades for her work on the series, including a Golden Globe Award and a Screen Actors Guild Award. In 2003, she appeared in ‘Bad Santa.’

She then appeared in ‘The Pacifier’ and in ‘Because I Told You So’. Graham was also cast in the 2007 film Evan Almighty, a sequel to the divine hit comedy Bruce Almighty.

She has also been working behind the camera and has since established her own production company, Good Game Entertainment.

How Does Lauren Graham Spend Her Money?

Lauren Graham has spent some of her money on helping different charities.

Here are some of the best highlights of Lauren Graham’s career:

“We moved in 8th grade, so 7th grade I was doing okay, and then 8th grade, everything fell apart. I had no fashion sense to speak of. We only had a couple of hair care products back then. We didn’t have all these things to tame your hair. Had glasses; I had braces. I had it all.” – Lauren Graham

“I’m baffled when young actors aren’t familiar with current film, television, and theater, or aren’t interested in older films or plays and the history of the craft in general. If you don’t know what’s out there, and what came before, then how can you picture yourself working, and how can anyone else?” – Lauren Graham

“Honestly, I was such a tomboy as a kid. People were taken from their mothers’ closets – I was taking from my dad’s closet. It was the ’80s, so it wasn’t terrible, but I was wearing my dad’s dress shirts over jeans from the Gap.” – Lauren Graham

“Acting is the most bizarre profession. You can stay in it for years and not really be in it and be waiting for someone to give you an opportunity. It’s like when I watch ‘American Idol’ and see people who have been told to believe in themselves at all costs: It’s not always a good idea.” – Lauren Graham

“One thing I’ve learned is I actually don’t like variety very much. I like having the same thing over and over: assorted lean proteins, arugula salad, quinoa or brown rice with soy sauce, olive oil, lemon, and salt. Those ingredients can pretty much get me through the week.” – Lauren Graham

View our larger collection of the best Lauren Graham quotes!

Now that you know all about Lauren Graham’s net worth and how she achieved success; let’s take a look at some of the lessons we can learn from her:

Perspective is the most important thing to have in life.

The thing you must really do on television is bringing yourself to everything you do – you can’t try to be anybody else.

As actors, we always say that once the person in a scene gets what they want, the scene is over. It’s resolved. But life is never resolved – you’re always in the process.

How much is Lauren Graham worth?

Lauren Graham’s net worth is estimated to be $15 Million.

How old is Lauren Graham?

How tall is Lauren Graham?

Lauren Graham is an American actress. Graham was born in Honolulu, Hawaii. Graham began her TV career with a role on Caroline in the City and, over the next few years appeared in several episodes of Law & Order.

What do you think about Lauren Graham’s net worth? Leave a comment below.