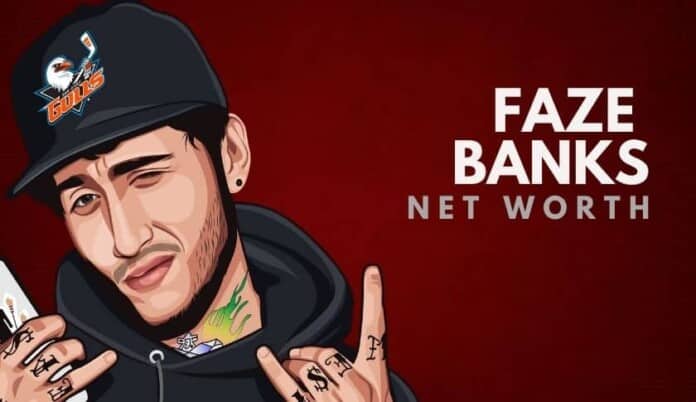 What is FaZe Banks’ net worth?

FaZe Banks is an American Youtuber who is one of the founders and owners of the e-sport organization FaZe Clan. The organization was founded by players known as ClipZ, Housecat, and Resistance in 2010.

He currently lives in Los Angeles and as of today, he is known for being one of the most popular YouTuber’s in the game.

Richard Bengtson was born on the 18th of October, 1991, in Lawrence. Bengtson holds a mixed ethnicity and he grew up in Miami with his family when he was younger.

He is well educated and in 2019, he stopped uploading videos on his YouTube channel to focus more on building up the e-sport organization FaZe Clan.

FaZe Banks’ social media has given him many opportunities to many younger teenagers and he is one of the most popular YouTuber personalities.

He began his career in 2011 with his YouTube channel ‘BanksHasBank’ and his first video posted was ‘The Single Greatest SoaRing In Style’ which was posted in 2011.

One of Banks’ most viewed videos ‘Crashing FaZe Temperrrs Car’ has more than 4.3 million subscribers and 77 million video views.

When his career as a YouTuber was on a roll, Banks made his foray into the world of gaming by joining the ‘Call of Duty’ gaming group FaZe Clan in 2013 while in Miami.

After his association with FaZe Clan, he changed his name to FaZe Banks. He now serves as the Chief Operating Officer of the group.

Here are the best highlights of FaZe Banks’ career:

“Depressed isn’t even the word. I miss being with people, traveling, going out for drinks with the girl I love. I miss my family. We really do take the simplest things for granted. Bring me back to 2019, this year has been fucking miserable.” – FaZe Banks

“Listen Nordan’s going through some serious s**t. I’ve been exactly where he is right now. It’s a lot more complicated than what could be shared in a tweet. We love and care for him unconditionally. This hasn’t been easy for anyone. We’ll get through it, that’s what families do.” – FaZe Banks

“Just want to take a second to say I’ve always appreciated black culture. From music to comedy to fashion. I love my African American brothers and I’m so sorry you’ve been fucked with for so long. Let’s change it, together. The world is a crazy f**n place right now, stay safe.” – FaZe Banks

“I’m not getting older, I’m getting better. Been a weird few months, but we’re good now. New year, new me. Thanks for the birthday love, I f**n adore you guys.” – FaZe Banks

Now that you know all about FaZe Banks’ net worth, and how he achieved success; let’s take a look at some of the lessons we can learn from him:

Since FaZe Banks first started with YouTube he just posted videos for fun and today he is one of the richest YouTubers and for his work with FaZe Clan. Don’t give up on your dreams.

How much is FaZe Banks worth?

FaZe Banks’ net worth is estimated to be $13 Million.

How old is FaZe Banks?

How tall is FaZe Banks?

FaZe Banks rose to fame with his YouTube channel and since then he has achieved a lot with the gaming group FaZe Clan.

Banks has always loved playing video games when he was younger and this turned into his profession eventually. Along with his passion for vlogging, he also serves as a producer, songwriter, and composer.

What do you think about FaZe Banks’ net worth? Leave a comment below.