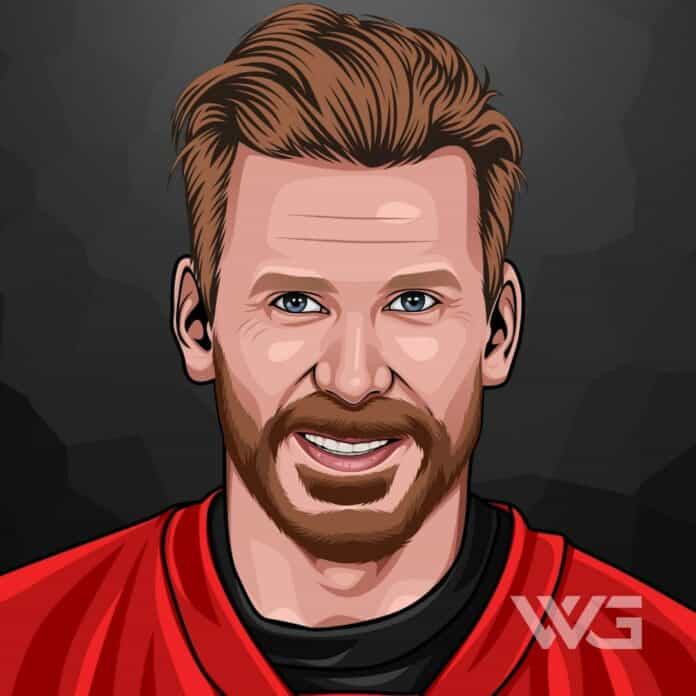 What is Daniel Alfredsson’s net worth?

Former Swedish professional hockey player Alfredsson has earned a significant net worth during his career in the NHL.

While he has since retired from the rink, he has continued to increase his wealth as a coach and advisor.

As of November 2022, Daniel Alfredsson’s net worth is estimated to be $51 Million.

Daniel has a younger brother, Henric, who has also played hockey for the Ontario Hockey League’s Ottawa 67’s during their Memorial Cup-winning season.

Little else is known about his life as a child, but after having grown up in Sweden, Alfredsson enrolled in the 1994 NHL Entry Draft and moved to Ottawa after being chosen to join the Senators.

Despite being overlooked by many NHL scouts initially, Alfredsson won the Calder Memorial Trophy during his rookie year and became a representative for the Senators at the 1996 NHL All-Star Game.

During the 1996-1997 season, Alfredsson earned another spot in the All-Star Game and contributed to the Senators’ first qualification to the Stanley Cup playoffs.

The following year, in 1998, Alfredsson received a standing ovation after taking to the ice and was named to represent the Senators for the third consecutive time at the All-Star Game.

While he missed 24 games during the 1998-1999 season, once he was back, he helped the team qualify again for the playoffs and, for his efforts, was named captain the following season.

Alfredsson continued to play well into the 2002-2003 season when the Senators won the Presidents’ Trophy, and by 2006 he was competing at the Winter Olympics, earning a gold medal with the Swedish team.

Despite having a rocky start in the NHL the same year, he earned his 600th career point in a match against the Philadelphia Flyers, and in 2007, he was considered the best player on the Ottawa Senators.

In 2008, Alfredsson underwent surgery on his knee but returned to the ice in under a week, signing a new four-year contract with Ottawa.

During the 2009-2010 season, Alfredsson played his 1,000th NHL game, and the following year, he scored his 1,000th career point during a match against the Buffalo Sabres.

Following more victories, a concussion, and spinal surgery, Alfredsson left the Ottawa Senators and signed a one-year contract with the Detroit Red Wings for the 2013-2014 season, after which he would retire from the ice.

However, in 2014, he did return with the Swedish team to the Winter Olympics, where he took home the silver medal.

As one of the richest hockey players in the world, Daniel Alfredsson has earned a lot of money during his career.

While we don’t know about all his career earnings, we do know how much he’s made from his significant contracts.

He may not be as wealthy as Wayne Gretzky, but Daniel Alfredsson has certainly earned a substantial amount during his career.

Daniel Alfredsson married his long-time girlfriend Birgitta Backman in 2004, and together they have four sons, Hugo, Loui, Fenix, and William Erik.

In 2016, at the World Cup of Hockey, Alfredsson became an official Canadian citizen during a special ceremony, and he currently calls Ottawa his home.

That said, Alfredsson does promote tennis in Ottawa as well as golf, which he enjoys playing when he’s not coaching local hockey or spending time with his family.

Daniel Alfredsson has won several awards throughout his career as a professional hockey player.

Although he has numerous accolades under his belt, some are much more significant than others.

Here are some of the most important awards and achievements from Daniel Alfredsson’s career:

Daniel Alfredsson has enjoyed many awards during his time on the ice, but these are, by far, his most prestigious.

How Does Daniel Alfredsson Spend His Money?

As someone who has stepped out of the limelight to live a more private life, little is known about how he spends his wealth.

We know he owns a home in Ottawa, Canada, where he lives with his family, but so far, Alfredsson hasn’t offered any information about its cost.

That said, if any information becomes available about Daniel Alfredsson’s impressive purchases, we will be sure to keep you informed!

Daniel Alfredsson has hit many milestones throughout his career that have helped him achieve his remarkable success.

While all of his achievements have been significant, some have stood out more than others.

Here are some of the best highlights of Daniel Alfredsson’s career:

Although he may not be playing anymore, Alfredsson has enjoyed a lot of success on the ice, which many other players can only hope to aspire to.

Daniel Alfredsson has been very vocal about his career as a professional hockey player.

Throughout various interviews, Alfredsson has given fans insight into how he approaches each game and works with his team.

Here are our favorite quotes from Daniel Alfredsson:

There are a lot of great things we can learn from Daniel Alfredsson and his 18-season career with the NHL.

Now that you know all about Daniel Alfredsson’s net worth, let’s take a closer look at what he can teach us about reaching our own goals.

Here are some of the best success lessons to learn from Daniel Alfredsson:

1. Don’t Shy Away From Teamwork

Teamwork is something every successful person needs to embrace, because nothing can be fully realized without the support of others.

While it may be tempting to try and take on everything on your own, being able to share the load with a team or support network can make reaching your goals much easier.

Hard work is a given when you’re trying to become successful, but many people lose motivation before they’re able to achieve their goals.

Although consistently working hard can be tough and exhausting at times, it is vital if you ever want to achieve your own success.

3. Don’t Let Your Skills Get Rusty

No matter how skilled you are at something, if you don’t keep up with your game, you can start to get rusty.

Because of this, it is essential to be able to constantly maintain your skills so that you can achieve your goals, no matter how lofty they may be.

Daniel Alfredsson may have retired from professional hockey, but his lasting legacy reminds fans of his talents.

While he may not be on the ice anymore, Alfredsson continues to increase his net worth with coaching and advising positions for the Ottawa Senators.

Make sure to check back often to see how large Daniel Alfredsson’s net worth will grow in the future!

As of November 2022, Daniel Alfredsson’s net worth is estimated to be $51 Million.

What do you think about Daniel Alfredsson’s net worth? Leave a comment below.