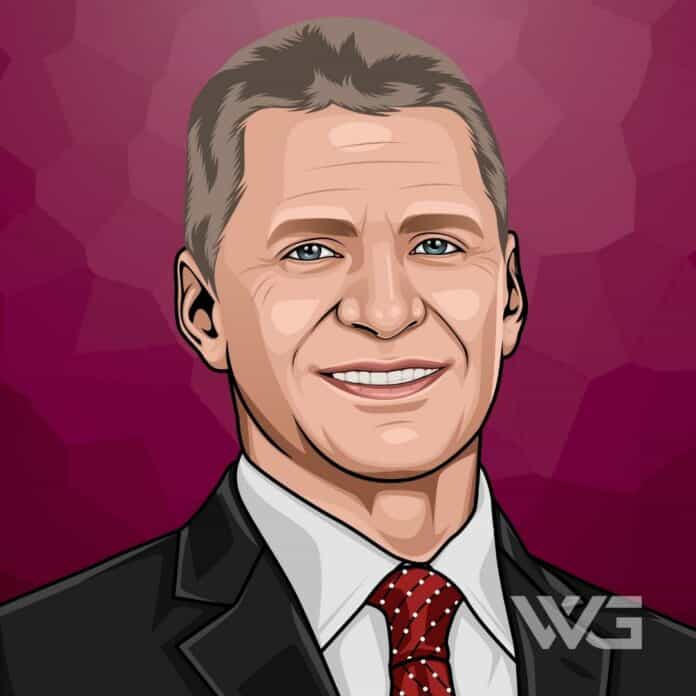 What is Jeff Burton’s net worth?

Jeff Burton is an American NASCAR racing car driver who has won 21 major races over the course of his career.

Since retiring from racing, he has remained in the spotlight through his commentary and analytical role with NBC broadcasting.

Jeffrey Tyler Burton was born June 29, 1967, in South Boston, Virginia, where he was introduced to go-kart racing by his father, John Burton.

After a successful run racing karts as a boy, he moved up to stock cars and late models during his teenage years.

Burton raced at the South Boston Speedway and, in the late 1980s, began racing in the Busch Series, driving the number 69 car previously owned by his father.

After racing in the Busch Series, Jeff Burton moved to the FILMAR Racing category, where he won his first Winston Cup Series race in 1993.

Burton was named the NASCAR Rookie of the Year the following year, signing again to Roush Racing in 1996 and driving a Ford Thunderbird.

As he continued enjoying success on the racetrack, he moved to Richard Childress Racing in 2004, later defeating Greg Biffle in the 2008 Bank of America 500.

Future races included heading off against Dale Earnhardt Jr at the Coca-Cola 600m and making his 1,000th career NASCAR start at the AdvoCare 500 at Phoenix International Raceway.

His race prize money was enhanced with his brand endorsement deals, including with SKF, CITGO PdVSA, and Caterpillar.

In 2014, Burton took a step back and began racing part-time, participating in research and development with Michael Waltrip Racing.

Jeff Burton’s 21 career wins and hundreds of top-ten finishes allowed him to take home considerable career earnings over the years.

This income was supplemented through brand sponsorships and remained high in his post-racing career thanks to his work as a commentator.

His work as an analyst for NBC means he continues to draw an impressive salary through his relationship with motorsports.

Burton’s many championship victories and other successes have made him one of the richest racing drivers in the world, with an impressive net worth.

His wealth saw its initial growth while racing with NASCAR, signing lucrative contracts with Richard Childress Racing and other major teams.

As his career as a commentator continues, we can expect his net worth to continue to increase in the future.

Jeff Burton and his wife, Kim, have two children together, including their son, Harrison Burton, who currently races as a NASCAR racing car driver in the Cup Series.

His family ancestry can be traced through Colonial Virginia, with his earliest ancestor, Richard Burton, coming to the United States in the 1630s.

Burton keeps a presence on social media through his official Instagram account, which covers his interest in NASCAR racing as well as his political aspirations.

With a net worth comparable to some of the richest athletes in the world, Jeff Burton’s life history is full of high points.

He’s transformed from a championship-winning racing driver to a media analyst with a lasting impact on American motorsports.

Here are some of the notable achievements from Jeff Burton’s career:

It’s a solid list of accomplishments and awards that marks Burton as one of his generation’s most influential race car drivers.

With his ongoing work in media, we can expect him to pick up more awards and honors that pay respect to his noteworthy career.

How Does Jeff Burton Spend His Money?

The most successful race car drivers are known for investing in some of the most expensive houses in the world, and Jeff Burton’s property portfolio is equally impressive.

He owns a sprawling estate in Huntersville, North Carolina, with acres of woodland surrounding the large mansion.

The home includes many bedrooms and bathrooms, with a large swimming pool located to the rear of the property.

Jeff Burton has experienced many high points over his career, from his time as a junior racer to his eventual retirement.

These successes have continued since he ended his professional racing career, with Burton’s ongoing involvement with the media keeping him in the public eye.

Here are some of the best highlights of Jeff Burton’s career:

These and his other achievements mark him as one of the most successful racers still active today, influencing the next generation of NASCAR professionals.

Undoubtedly, we can expect more high points as his work as an analyst and commentator continue into the future.

With several decades of experience as a professional racer and commentator, Jeff Burton is no stranger to the press.

Over the course of his career, he’s spoken about his personal and professional life many times and the nature of motorsports.

Here are our favorite quotes from Jeff Burton:

Now that you know all about Jeff Burton’s net worth, we’ll take a closer look at how his professional success can give us valuable lessons.

His championship wins, and dedication to training are sources of inspiration for anyone looking to achieve results in their own lives.

Here are some of the best success lessons to learn from Jeff Burton:

1. Learn From Your Elders

With his father and brother also working as professional race car drivers, it was perhaps inevitable that Jeff Burton would follow in their footsteps.

If you have talented people in your close circle of friends and family, try to learn as much from them as you can.

2. Be Proud Of Your Influences

Burton is known for being a huge fan of martial arts icon Bruce Lee and wasn’t ashamed to boast this fact when racing.

He used a special Bruce Lee paint scheme on his No. 99 For when racing at the Coca-Cola 500 in Japan.

3. Be Prepared For Later In Life

Success in any sporting endeavor has a limited shelf life, so be prepared for what comes next is crucial.

Jeff Burton made the transition to commentary when his racing performance declined, ensuring his ongoing career earnings would remain high.

So there you have it, our comprehensive article outlining the professional success and net worth of American professional race car driver Jeff Burton.

Since retiring from racing, he’s continued to work as an analyst in the media, with his insights helping to shape the new generation of NASCAR racers.

With his net worth likely to change, make sure you check back on this article for the most up-to-date version covering the latest facts and figures.

What do you think about Jeff Burton’s net worth? Leave a comment below.