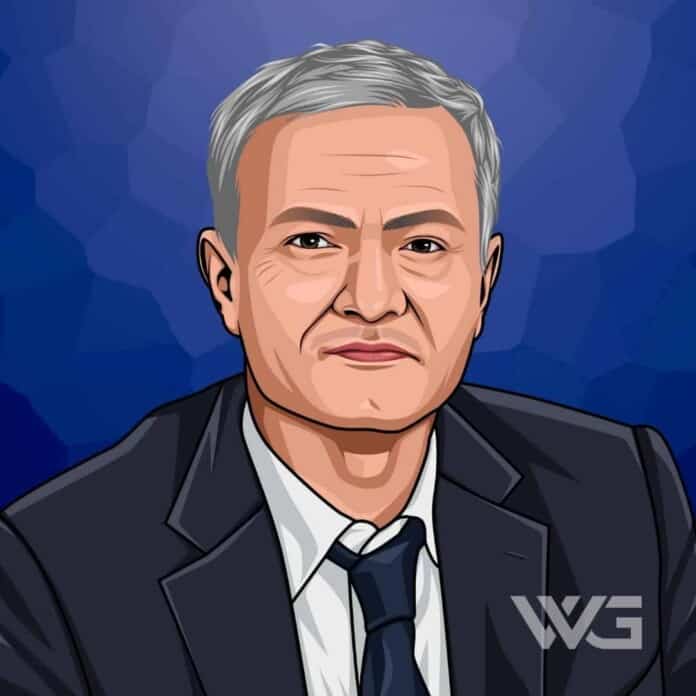 What is Jose Mourinho’s net worth?

José Mourinho is a Portuguese professional football coach and former player who most recently served as manager of English club Manchester United. As a manager, Mourinho has won 25 major honors, making him one of the most successful managers of all time.

As of December 2022, Jose Mourinho’s net worth is estimated to be roughly $120 Million.

José Mário dos Santos Mourinho was born on the 26th of January, 1963, Setúbal, Portugal. His father played football professionally for Os Belenenses and Vitória de Setúbal, earning one cap for Portugal in the course of his career.

His mother was a primary school teacher from an affluent background; her uncle funded the construction of the Vitória de Setúbal football stadium.

In 1992, Mourinho got the opportunity to work as an interpreter for a renowned foreign coach, Bobby Robson, at Sporting Club Portugal.

In 2002, he took charge of the poorly performing Porto team and by the end of the season, took it to 11 victories in 15 matches.

During his first season at Inter Milan, he won the Supercoppa Italiana and also finished at the top of Serie A. In the following season, he helped the club to win the treble of Serie A, the Coppa Italia and the UEFA Champions League.

Despite signing a four-year contract on August 7, 2015, he left Chelsea later that year after losing 9 of 16 games that season.

He signed a three-year contract with Manchester United on May 27, 2016, and became the first United manager to win major trophies in his debut season by winning the EFL Cup and the Europa League.

Here are some of the best highlights of Jose Mourinho’s career:

“Please don’t call me arrogant, but I’m European champion and I think I’m a special one.” – Jose Mourinho

“I intend to give my best, to improve things and to create the football team in relation to my image and my football philosophy. We have top players and, sorry if I’m arrogant, we have a top manager. I’m not a defender of old or new football managers. I believe in good ones and bad ones, those that achieve success and those that don’t. Please don’t call me arrogant, but I’m European champion and I think I’m a special one.” – Jose Mourinho

“Instead of speaking about Real Madrid, Mr Wenger should speak about Arsenal and explain how he lost 2-0 against a team in the Champions League for the first time [Braga]. The history of young kids is getting old now. Sagna, Clichy, Walcott, Fabregas, Song, Nasri, Van Persie, Arshavin are not kids. They are all top players.” – Jose Mourinho

Now that you know all about Jose Mourinho’s net worth, and how he achieved success; let’s take a look at some of the best lessons we can learn from him:

1. Reinvent Yourself or Die

In many ways, Mourinho seemed a prisoner of his stunning success at a young age. Perhaps he was unwilling to go through the painful change of breaking free from his prior orthodoxy.

Or perhaps he was hostage to the others’ expectations – such as fans and the Manchester United hierarchy – that he could generate results quickly.

Whatever the case, the lesson is clear: if you are unwilling to reinvent yourself, regardless of how it may damage your ego or how others perceive you, you will eventually wither into obscurity.

2. But Reinvent Yourself Thoughtfully

One of the stranger things about the past 5 months was the sense that Mourinho had no clear vision for how to change the team. The style of play was disjointed, with no discernible framework.

Instead, Mourinho engaged in lengthy discussions about how he *thought* United should play, starting to resemble the football ‘Einsteins’ he’d so pilloried.

Reinvention is, of course, easier said than done – it may be an evolution rather than revolution, and it should never sacrifice timeless qualities for fads. It appears, unfortunately, that Mourinho never struck this balance at United.

3. Focus on Process, Not Outcomes

Jose had done enough to earn a third season at United. But this season was sufficiently poor to make clear to all but the staunchest Mourinho defender that he had lost the team.

In many ways, this reflects the challenging nature of deciding when to pull the plug on all kinds of investments – financial, personal relationships or otherwise. When it’s clear that something isn’t working, move quickly. For once, the United hierarchy acted with alacrity.

How much is Jose Mourinho worth?

Jose Mourinho’s net worth is estimated to be $120 Million.

How old is Jose Mourinho?

How tall is Jose Mourinho?

Jose Mourinho is a Portuguese football manager and former footballer who is considered one of the greatest and most successful managers in the world by many players, rival coaches, and commentators.

What do you think about Jose Mourinho’s net worth? Leave a comment below.