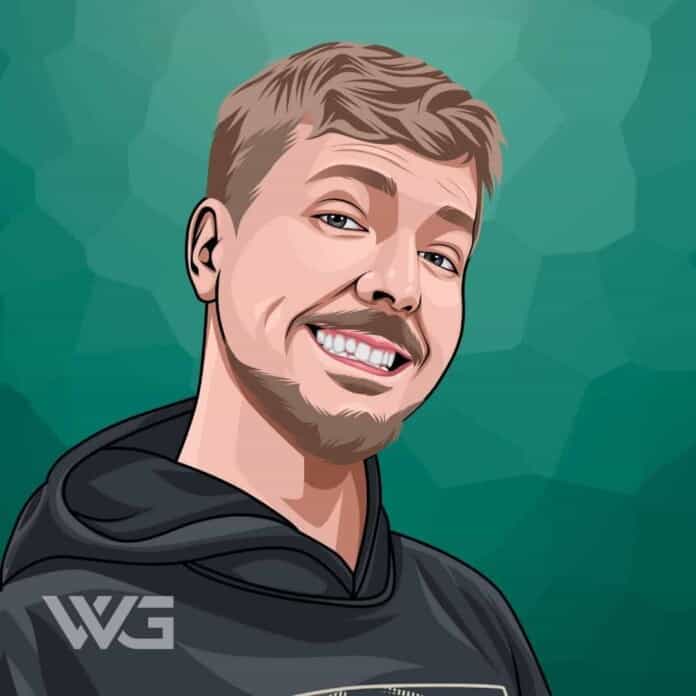 What is Mr Beast’s net worth?

As of February 2023, Jimmy Donaldson’s net worth is estimated to be $25 Million.

Jimmy Donaldson, “Mr Beast,” is an American YouTube star and entrepreneur who is known for his expensive stunts and philanthropy. Donaldson has a huge fanbase on his social media, and he is also the co-creator of ‘Team Trees,’ which is a fundraiser for the Arbor Day Foundation.

He is considered the pioneer of philanthropic YouTube stunt videos. Besides, he is reportedly one of the highest-paid YouTubers in the world. In 2020 he earned $24 million from his YouTube channel videos, merchandise sales, ad revenue, and sponsorships with reputable brands, such as Electronic Arts and Microsoft.

• He has donated more than 100 cars, including Lamborghini

• He gave away $1 million in one video

• He gave away a private island

Jimmy Donaldson was born on May 7, 1998, in Greenville, North Carolina. Donaldson was raised by his mother, and he spent most of his childhood with his brother. He attended Greenville Christian Academy and graduated in 2016.

In 2012, he created his YouTube channel and began posting random videos under the username “MrBeast6000.” He first gained attention when he posted a video titled ‘Worst Intros On YouTube.’ He attended college for a brief period of time as he dropped out to pursue a full-time YouTube career.

Over the years, on his YouTube channel, Jimmy received more and more subscribers. In his early viral videos, he posted video game commentary for such gaming videos as Pokemon Online, Minecraft, Black Ops 2, Battle Pirates, and many more.

He also posted reaction videos and funny compilations. He first gained widespread popularity after releasing a video called “Counting to 100,000” in 2017. In the video, he spent 44 hours counting to 100,000. The video has gained more than 21 million views. He then followed up with another video in which he counted to 200,000.

He soon started spending thousands of dollars online and began posting videos such as ‘$5 For Hot Girls To Advertise Your YouTube Channel.’ Among his most remarkable accomplishments posted on his YouTube channel are riding across America via Uber, reading the dictionary, reading the “Bee Movie” script, saying “Logan Paul” 100,000 times, and watching Jake Paul‘s “It’s Every Day Bro” song on repeat for 10 hours straight.

Mr Beast’s rise to fame came when he began to post heartwarming donation videos, including ‘Giving A Random Homeless Man $10,000.’ He continued posting such videos and claimed that an app called ‘Quidd’ was sponsoring the money that he gave away to people.

Some of his most-viewed YouTube videos include ‘I Bought A Car Using Only Pennies,’ ‘I Donated $30,000 To A Random Twitch Streamer,’ ‘I Flew Using Only Leaf Blowers,’ and ‘Can 100,000 Pieces Of Paper Stop A Bullet?’

One of his popular videos, ‘Gave $500,000 To Random People,’ has already gathered more than 10 million views. He is also popular on other social media platforms, and he owns an online store where he sells T-shirts.

Mr Beast is associated with the famous YouTuber PewDiePie. He purchased radio advertisements and billboards to help him get more subscribers than another popular YouTube channel, T-Series.

Here are the best highlights of Jimmy Donaldson’s career:

In October 2019, Jimmy and Mark Rober, a former NASA engineer, launched a fundraising challenge #TeamTrees to raise $20 million for the Arbor Day Foundation within 3 months. They managed to collect the money within 2 months and raised $23 million before the start of 2020.

They planted over 20 million trees and therefore contributed to removing an estimated 1.6 million tons of carbon emissions from the atmosphere, as well as 116 thousand tons of air pollution.

Jimmy launched the “Beast Burger”‘ in December 2020 in partnership with more than 300 restaurants across the United States.

He released MrBeast Burger app on the Apple store, which became the pioneering and most popular free app on the platform. To this date, he has sold over a million burgers.

Mr Beast launched a multiplayer endurance game, “Finger on the App,” in June 2020. The game’s concept was quite straightforward – users from all over the world were supposed to keep their fingers on their phone screens in the app. The last person to take the finger off would win $25,000.

Mr Beast has raised and donated tens of millions of dollars to numerous charities across the US. His stunt videos have been donated to the Veterans Army Wounded Warrior Program, Saint Jude Children’s Research Hospital, various homeless shelters, and a local animal shelter in Los Angeles.

For example, one of his videos from December 2018 donated $100,000 worth of clothing and other items to homeless shelters.

How Does Mr Beast Spend His Money?

There isn’t a lot of information out there about how Mr Beast spends his $25 million valuation.

The YouTuber has confirmed that most of his earnings go into content production or are used as giveaway money. He also spends his money on doing remarkable things like adopting entire dog shelters.

As of August 2020, Mr Beast has spent over $3 million dollars on producing YouTube content, paying out salaries to his staff and rent, among other things.

There is limited information about Mr Beast’s house, yet it is reported that Donaldson owns a few massive properties in Kansas, Georgia, Las Vegas, Los Angeles, and New York.

Jimmy suffers from an inflammatory bowel condition called Crohn’s disease, which he was diagnosed with in ninth grade. He has mentioned the long-term battle against the condition over the years.

Before he was diagnosed, he was getting sick almost every day. At one point in his life, he lost 30 pounds due to the side effects caused by the disease. Jimmy is constantly under specific medication and follows a strict diet.

In June 2019, he began dating Maddy Spidell, whom he met over Twitter. It was revealed that Maddy is Mr Beast’s girlfriend in February 2020 when he posted a video on YouTube called “Surprising My Girlfriend With 100,000 Roses For Valentines Day.” The video has gained more than 50 million views. Maddy later appeared in a number of Mr Beast’s videos, including “I Spent 50 Hours in Solitary Confinement and “I Adopted EVERY Dog in a Dog Shelter.”

“I used to make a dollar a day, so I didn’t even have a microphone. My mindset was just ‘reinvest everything I make – every time I got a paycheck, that was the month’s budget.” – Jimmy Donaldson

“One of the reasons I like giving away money is I just like to see how people react. When you just hand someone $10,000 — like, ‘It’s yours’ — what do they do, you know? Some people don’t believe you. Some people think it’s fake. It’s just fun.”– Jimmy Donaldson

“The hardest part for me was getting relevant! It took like five years to get anywhere. And the entire time, every week I was just like ‘Should I just quit? Am I wasting my time?’” – Jimmy Donaldson

“My goal is to make a new vlog channel where I vlog running my charities. All the ad rev, merch sales, brand deals, etc will go towards feeding/helping people in the charities! I honestly think we could support multiple communities with this.” – Jimmy Donaldson

Now that you know all about Mr Beast’s net worth and how he achieved success; let’s take a look at the best life lessons that we can learn from him:

Jimmy Donaldson likes to make other people happy and the art of life is to know how to enjoy a little.

We can attribute most of Mr. Beast’s growth and success on YouTube to giving back. His videos almost always include giving away things like money, cars, groceries, and so on to others. It’s a win-win in this situation, as people get unexpected gifts, and in return, he gets viral content for his channel.

How much is Jimmy Donaldson (Mr. Beast) worth?

Jimmy Donaldson (Mr. Beast)’s net worth is estimated to be $25 Million.

Jimmy Donaldson, aka “Mr Beast,” has one of the most successful YouTube channels in the world. He first gained his attention when he started to post videos about the worst intros on YouTube. Donaldson is also popular on platforms such as Instagram and Twitter.

As of February 2023, Jimmy Donaldson’s net worth is estimated to be $25 Million.

What do you think about Jimmy Donaldson’s net worth? Leave a comment below.