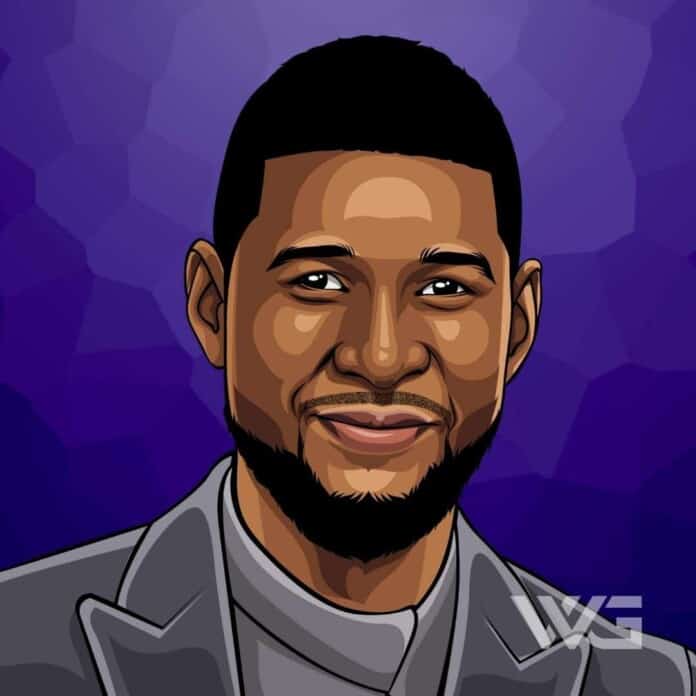 What is Usher’s net worth?

Usher has produced a large number of albums and songs throughout his career and he is known for being one of the best R&B singers in the 21st century.

Usher Raymond IV was born in Dallas, Texas on the 14th of October, 1978. He is the son of Usher Raymond III and Jonetta Patton. Usher spent his childhood mostly in Chattanooga. His father left the family when Usher was 1 years old.

Usher attended North Springs High School where he later pursued his career as a singer. His grandmother was the one who discovered his ability to sing.

After Usher began a recording contract with LaFace Records he released his first self-titled debut album, at the age of 15. The album did well and peaked at No.25 on the Billboard Top R&B/Hip-Hop Albums, and at No.167 on the Billboard 200.

Shortly after Usher graduated from high school he continued to work on his skills to release his next album. His second album ‘My Way’ was released in 1997 and included the hits such as ‘You Make Me Wanna’ and ‘Nice & Slow’. It debuted at No.15 on the Billboard 200.

Usher’s fourth album was released in 2004 and also received good feedback. This time, his new album sold over 1.1 million copies in its first week.

His latest album ‘Daddy’s Home’ was released in 2018 and like his others became a huge hit.

Here are some of the best highlights of Usher’s career:

“Success is about dedication. You may not be where you want to be or do what you want to do when you’re on the journey. But you’ve got to be willing to have vision and foresight that leads you to an incredible end.” – Usher

“The first time I got a chance to meet Michael was onstage at Madison Square Garden. There were tons of people on the stage, and I just remember losing my mind. Like, Oh my God, that’s Michael Jackson right there. I was just over his right shoulder. And then when I finally got a chance to get on the stage with him, I was just shut down. He had the type of magic that you just bowed to. I just said, “I love you, and I know you’ve heard it a million and one times from fans all over the world, but you’ve meant so much to me as an entertainer, and I love you, and I’ve admired you all these years.” – Usher

“Breaking up is a natural evolution when you try to figure out what you want in life. If you’re with an individual who isn’t moving in the same direction and at the same rate that you are, it ain’t going to work.” – Usher

“As you go down the rabbit hole of reading into our history, you realize that there are so many things that history books didn’t teach us about ourselves.” – Usher

“How do I define who Usher is? I’m still doing it – every day, every new opportunity, every stage, every interview, every other thing that I’ve done, every time that I’ve invested in anything that is all the definition of who I am.” – Usher

View our larger collection of the best Usher quotes!

How much is Usher worth?

Usher’s net worth is estimated to be $180 Million.

How old is Usher?

How tall is Usher?

Usher is a highly successful singer and songwriter. He has worked with some of the best artists throughout his career such as Justin Bieber, Ludacris, and Lil Jon.

There’s no doubt that Usher’s music career will continue to be successful. He already has an incredible net worth; As of February 2023, Usher’s net worth is $180 Million.

What do you think about Usher’s net worth? Leave a comment below.