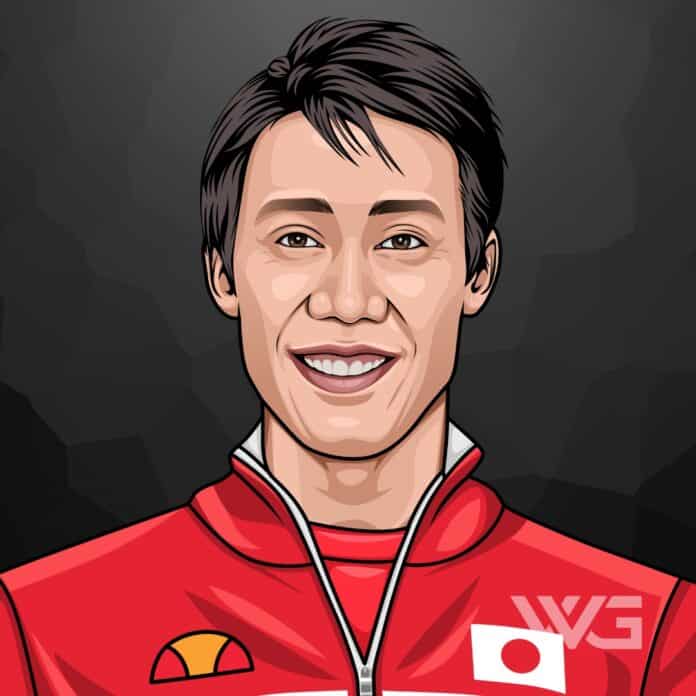 What is Kei Nishikori’s net worth?

Kei Nishikori is a former Japanese professional tennis player who was ranked sixth in the world in earnings.

His performance at the 2014 US Open made him a household name in international tennis. Kei proved that he belonged on the tennis circuit with great performances at Wimbledon as well as at the 2014 Madrid Masters.

As of November 2022, Kei Nishikori’s net worth is estimated to be $24 Million.

During his childhood, Kei participated in many activities other than tennis, such as golf, football, and reading. He focussed on golf after he achieved his first victory at the All-Japan Tennis Championship for Kids in 2001.

After graduating from Aomori-Yamada High School, Kei decided to move to Florida and join the IMG Academy so that he could pursue his career in tennis.

At the age of 15, he won a title at the Riad 21 tournament in Morocco in 2004. He also ended up being a quarterfinalist at the 2006 Junior French Open.

In the year that Kei turned 17, he won the Luxilon Cup after defeating Michael McClune at the Sony Ericsson Open in 2007. He went on to become one of the youngest players to ever reach the quarterfinals at the Indianapolis Tennis Championship.

When he turned 18, he attended the Delray Beach tournament ranked 244 and won it after beating James Blake in three sets. Kei became the first Japanese player to win an ATP title in over 16 years.

He made his US Open debut in 2008, beating Juan Monaco in the first round, and then broke a record for the Japanese once again when he reached round 16 of the US Open in 2008.

Unfortunately, the following year was Kei’s most disappointing season. Due to an injury to his right elbow, he was forced to withdraw from the US Open, French Open, and Wimbledon.

Thankfully, he made a comeback in 2010, advancing to the quarterfinals of both the Tallahassee and Baton Rouge events, then then ranking number 7 in the world after reaching the third round at the 2011 Australian Open.

That same year, he was able to reach his first Masters 1000 semi-finals. After a highly successful season, Kei finished 2011 with a number 24 world ranking.

3 Years later, he had one of his biggest career breakthroughs when he reached the Masters 1000 tournament finals in 2014.

In 2016, he moved up to number 4 in the world halfway through the season, after participating in the 2015 Abierto Mexicano Telcel.

He started the 2016 season ranking number 8 and decided to enter the 2016 Summer Olympics, which resulted in him bringing home a bronze medal.

Kei was able to make it back to the number 5 world ranking by the end of the 2016 season, competing against players like Andy Murray, Novak Djokovic, Rafael Nadal, and Roger Federer for top honors.

Recently, Kei participated in Washington, where he beat elite players such as Lloyd Harris and Cameron Norrie, to progress to the semi-finals.

Unfortunately, it was announced that Kei would be going under hip surgery in January 2022 but he is hoping to make a return soon.

Nishikori originally played in Japan but moved to the United States of America to further pursue his career.

As he rose in the rankings, his income soared, making the move to the US well worth his while.

After breaking the record for the highest-placed player of Japanese descent to reach number 16 in the rankings, he took a bit of a hit the following year.

The injury to his right arm in 2018 caused him to withdraw from the major tournaments in the US and Europe, impacting his earnings.

His number 5 world ranking brought in the sponsors and his match winnings increased steadily.

Here’s a breakdown of Kei Nishikori’s annual net worth:

Unfortunately, Nishikori has been plagued by serious health issues which have affected his ability to compete.

His current hospitalization due to the operation on his right arm will see him out of action for quite some time.

In 2020, Kei married his long-term lover, Mai Yamauchi, and Kei announced that he was to be a father in December 2021.

Kei revealed in an interview that he finds it tough being a parent and says he never realized how difficult it would be to look after children.

He is well aware of his responsibilities as a tennis star and regularly contributes to charities and events to raise money for worthy causes.

Kei lives a humble and low-level lifestyle where he focuses most of his time on training and events.

He also believes that good sleep is everything and will help you to be more motivated the day after.

Right from the start of his career, Kei has been winning awards and accomplishing record-breaking achievements.

He is particularly proud of his performance in the Olympics, becoming one of the few medallists in Japan’s Olympic history.

Here are some of the more memorable moments from Kei Nishikori’s career:

Kei had a disappointing year in 2017 due to a wrist injury, which resulted in his first time ranking outside of the top 20.

He took 5 months’ leave due to the injury and only returned in 2018, making his way back up to the top 10 by the end of the season.

How Does Kei Nishikori Spend His Money?

In February 2016, Japan Airlines (JAL) announced that it had concluded a sponsorship deal with Nishikori and launched a jet, called “JET-KEI”.

The jet flew on international routes until the end of his contract. While Kei may not have his own jet anymore, he enjoys various exclusive deals with multiple airlines.

He travels on some of the most expensive airlines in the world, making his travel arrangements much easier and less stressful.

Kei and his family currently reside in a mansion in Brandenton, Florida which he purchased for $850,000.

Kei has a soft spot for some of the most expensive cars in the world and loves Jaguar cars, especially his Jaguar Special Edition.

2010 was a good year for Kei as he achieved the best Grand Slam tournament showing of his career at the US Open.

His consistent play was rewarded by inclusion in the Tokyo Olympics team where he reached the quarter-finals in the men’s singles.

Here are some of the best highlights of Kei Nishikori’s career:

This put him in competition with some of the greats in the tennis world and cemented his position as a top contender.

Kei is softly-spoken and very respectful, always considering others with a personality that is at odds with his tenacious performances on the court.

He is quietly confident in his interviews, acknowledging both the good and bad in his game, and always willing to work hard to improve.

Here are our favorite quotes from Kei Nishikori:

“My motivation for tennis has been increasing every year.” – Kei Nishikori

Modern athletes are under a huge amount of strain to complete and, despite the advanced medical treatment they receive, injuries are common.

Kei knows that it is important to look after one’s body, but he’s suffered some serious injuries that have put him out of action for months at a time.

Now that you know all about Kei Nishikori’s net worth, here are some of the best success lessons to learn from Kei Nishikori:

1. It’s Good To Rest When Your Body Needs It

Rather than making things worse, know when your body needs to rest so you don’t overwork yourself.

By being patient, Kei has managed to overcome his injuries and come back stronger and more determined.

When things get tough, make sure to focus on your goal, so you don’t get distracted by arbitrary things.

Kei is known for his laser-focused approach to tennis and his performances prove just how good he is at avoiding distraction.

Being confident on the court puts you at an advantage, which can lead your opponent to assume an outcome.

Tennis battles are fought as much in the head as on the court. So, Kei is aware of how important his mental approach to every game is.

Kei has made a huge impact on the game of tennis, earning a solid reputation and being an inspiration to his fans back in Japan.

Even though he has been suffering multiple injuries lately, we know that Kei will return to the courts as soon as he is ready.

As of November 2022, Kei Nishikori’s net worth is estimated to be $24 Million.

What do you think about Kei Nishikori’s net worth? Leave a comment below.