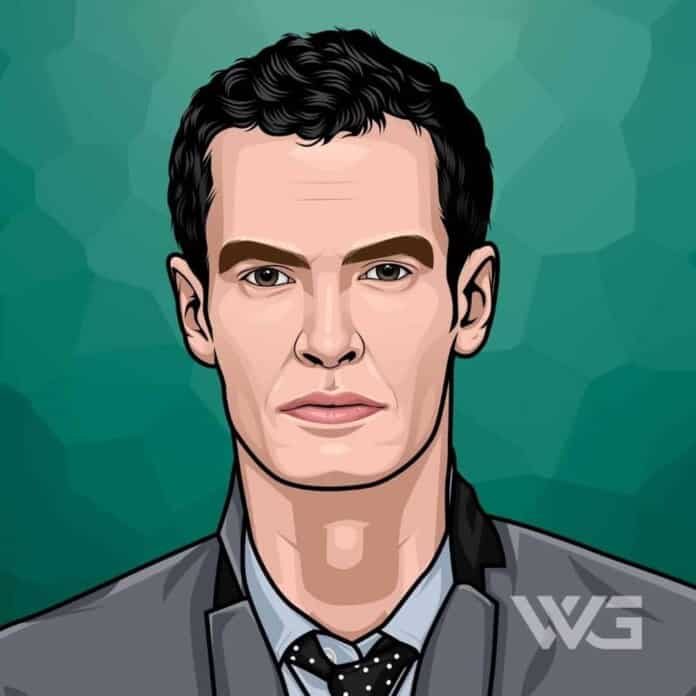 What is Andy Murray’s net worth?

Murray has been ranked world No. 1 by the Association of Tennis Professionals for 41 weeks and finished as the year-end No. 1 in 2016. Throughout his career, he has won three Grand Slam singles titles.

He is the son of Judy and Willia Murray. Murray is a  supporter of Hibernian Football Club, one of the teams his grandfather represented.

He started playing tennis at the age of three. He played his first tournament when he was five years old. His elder brother, Jamie, is also a professional tennis player, playing on the doubles circuit, and became a multiple Grand Slam winner in the discipline.

In 2012, Murray went to the Wimbledon finals for the first time. He won the semifinal against Jo-Wilfried Tsonga but lost to longtime rival Roger Federer in the final.

The same year, he avenged the loss at the Summer Olympics, when he beat Federer and took his first Olympic gold medal, denying Federer his first singles gold medal.

At the 2012 US Open, he defeated Novak Djokovic in five sets, becoming the first player from Great Britain to win a Grand Slam singles tournament since 1977.

The following year, Murray won his first Wimbledon men’s singles championship. He made history as the first British Wimbledon champion in 77 years and only the second Scottish-born player to take the title.

He is known for his groundstrokes with a low error rate, his ability to anticipate and react, and his transition from defense to offense with speed, enabling him to hit winners from defensive positions.

How Does Andy Murray Spend His Money?

Andy Murray spends some of his money on real estate and cars.

Murray owns cars such as a Porsche Cayenne and an Aston Martin DB9.

Here are some of the best highlights of Andy Murray’s career:

“This year, it’s just about winning the big matches because if you’re going to get into the top 20, then you’ve got to do well at the Masters Series and the grand slams. I don’t have any ranking points to defend for the first few months of the year, so if I do well over the next few weeks, then I’ve got a chance of doing it.” – Andy Murray

“Proved that I could win the Grand Slams. I proved that I can last four and a half hours and come out on top against one of the strongest guys physically that tennis had probably seen especially on this surface.” – Andy Murray

“People think I am unemotional because my voice is flat and a bit boring. It is unfortunate but it is just the way it is. I’ve tried to change it but it doesn’t seem to make a difference. The truth is, I have lots of emotions inside.” – Andy Murray

“I understand how much everyone wanted to see a British winner at Wimbledon and I hope everyone enjoyed it. I worked so hard in that last game. It’s the hardest few points I’ve had to play in my life. I don’t know how I came through the final three points… that last game … my head was kind of everywhere. That last game will be the toughest game I’ll play in my career, ever.” – Andy Murray

Now that you know all about Andy Murray’s net worth and how he achieved success; let’s take a look at some of the lessons we can learn from him:

You have to go into each match believing you can beat all of the players.

3. Focus On Your Own Career

You can’t focus on other people’s careers. Everybody is different.

How much is Andy Murray worth?

Andy Murray’s net worth is estimated to be $100 Million.

How old is Andy Murray?

How tall is Andy Murray?

Murray has been ranked as one of the world’s best tennis players since 2007. He is a two-time Grand Slam winner.

What do you think about Andy Murray’s net worth? Leave a comment below.