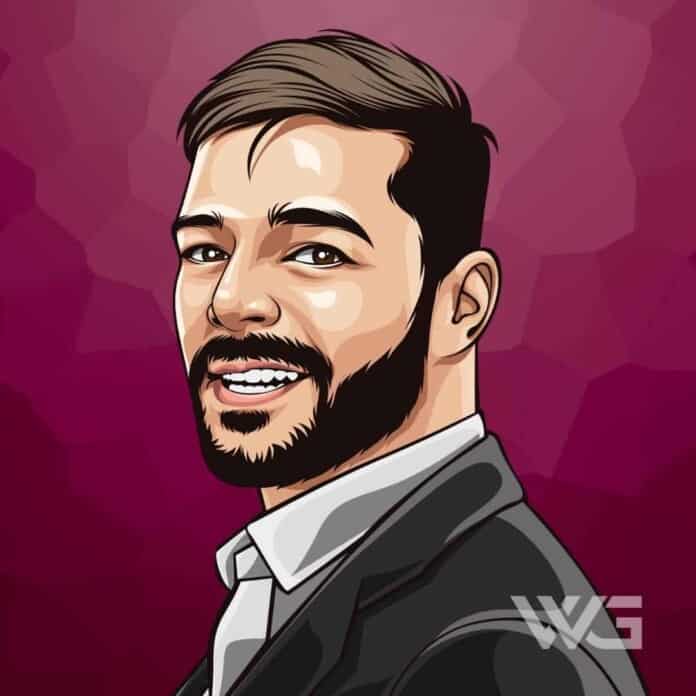 What is Ricky Martin’s net worth?

As of September 2022, Ricky Martin’s net worth is estimated to be roughly $130 Million.

Ricky Martin is a Puerto Rican singer, actor, and author who is widely regarded as the “King of Latin Pop”.

Martin began his career at age 12 with the all-boy pop group Menudo. After five years with the group, he released several Spanish-language solo albums throughout the 1990s.

Enrique Martin Morales was on the 24th of December, 1971, in San Juan, Puerto Rico. He is the son of psychologist Enrique Martin Negroni and accountant Nereida Morales.

At six, he took up singing and acting lessons and started performing in school plays and choir soon after. By eight, he was appearing in TV commercials for soft drinks, fast-food restaurants, and toothpaste.

Martin was selected in the Latin boy-band Menudo in 1984 after three auditions and gave his first performance a month later at the Luis A. Ferre Performing Arts Center, San Juan.

In 1989, he left the group at the age of 17 after recording 11 albums and returned to Puerto Rico to complete his high school. He, then, enrolled at Tisch School of the Arts, New York University, New York City, to study acting and singing.

He released his debut solo Spanish-language album ‘Ricky Martin’ in 1991, under Sony Discos, which became a hit on the Latin charts. This was followed by his second solo album ‘Me Amaras’ in 1993.

He traveled the globe with his ‘One Night Only with Ricky Martin’ tour in 2006, performing in Latin America, United States, Europe, and Africa. In between, he performed at the closing ceremony of the 2006 Winter Olympics in Turin, Italy.

In 2010, he published his autobiography ‘Me’, which was included in the Bestseller list of The New York Times. He released his chart-topping album ‘Musica + Alma + Sexo’ in 2011, which reached No. 1 on the Billboard Top Latin Albums.

Here are some of the best highlights of Ricky Martin’s career:

“One day I’m riding a bicycle in my neighborhood, the next day I auditioned for Menudo and was on a plane to perform in front of 200,000 people.” – Ricky Martin

“I eat everything, that’s a problem. I don’t have discipline. My favorite dish in the Caribbean. Meat, rice, lots of grains. But I do like to do exercises. Lately, I’ve been having capoeira classes and lots of cardiovascular exercises, such as jogging and cycling.” – Ricky Martin

“A lot of people say, ‘Wow, you’re a single father of twin boys, that’s crazy!’ Two toddlers can get hectic, but I wouldn’t change it for anything. Every day they teach me different things. The love is there. When you have a two-year-old saying every other hour, ‘Papi, te amo. Papi, I love you,’ it can’t get better.” – Ricky Martin

“I was onstage with Menudo since I was 12 years old. To us, the most successful one was the guy with the most fans. If you moved your hips and the girls screamed, you were getting it right. Who wouldn’t want to be like Elvis or Jim Morrison!” – Ricky Martin

“I always wanted to be a father. I have a beautiful relationship with my dad and beautiful memories.” – Ricky Martin

Now that you know all about Ricky Martin’s net worth, and how he achieved success; let’s take a look at some of the lessons we can learn from him:

Often times, making a big change in your life is necessary to move forward. Whether it’s changing careers, changing your diet, dropping toxic friends, moving to an entirely different area, or anything else, it’s not always the easiest thing to do. Good things take time.

Your decision to make a change will really come down to whether or not you’re willing to let go of what’s comfortable in order to experience a life that you really want.

If you’re not happy with your life right now, do something about it! Hanging on to an okay life just because it’s comfortable will only keep you from experiencing a great life.

How much is Ricky Martin worth?

Ricky Martin’s net worth is estimated to be $130 Million.

How old is Ricky Martin?

How tall is Ricky Martin?

Ricky Martin is a Puerto Rican singer who ruled the world of Latin and American pop during the 1990s.

However, it was his blockbuster single ‘Livin’ la Vida Loca’ that brought him worldwide recognition and made him an international superstar. He is credited for selling over 70 million albums across the world to date, apart from performing concerts worldwide and bagging numerous music awards.

What do you think about Ricky Martin’s net worth? Leave a comment below.