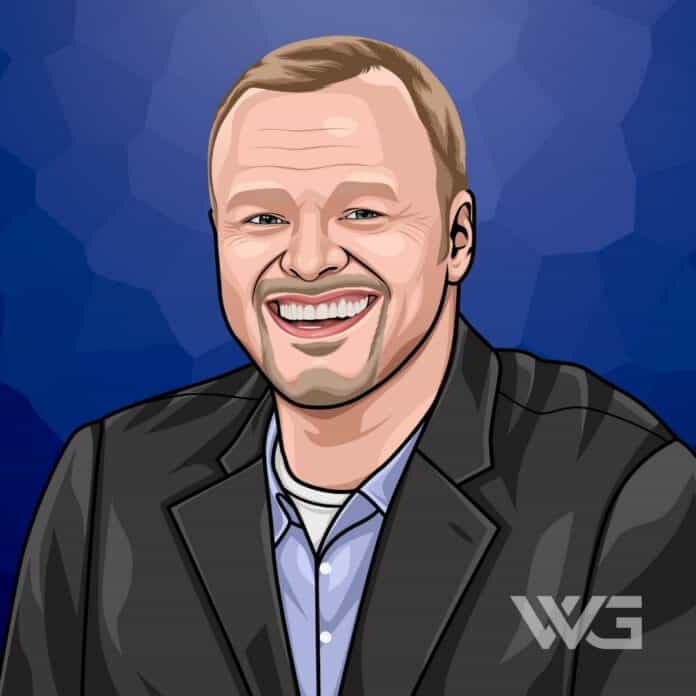 What is Stefan Raab’s net worth?

He produced a well-known and popular German song poking fun at a soccer coach and became one of the most powerful personalities on German television.

Unfortunately, he has also gained publicity by insulting guests on his shows and referencing drugs, which ended in multiple lawsuits.

Despite his legal troubles, he built great wealth through his television business interests and clever investment strategies.

He studied law but dropped out as he didn’t seem to be able to find his feet at university. Although there isn’t much known about his early life, what we do know is that he made a breakthrough in the music industry in 1990.

During the early part of his career, Stefan performed at multiple Eurovision Song Contests and is known for his performance of the wacky song, “What do you have there?”.

He also released a song that was a spoof of the national football coach, Berti Vogts.

He gained confidence, hosting his own show in 1999 called TV Total. The show included different types of celebrity sports events, such as a boxing match against Regina Halmich, which Stefan lost.

The show also created new types of sports, such as the World Wok racing championship, and invented a sport that involved a version of football with exercise balls and cars.

During his quick rise to fame on television, he became known as one of the most powerful men in German entertainment television.

Stefan then moved on to hosting the talk show ProSieben, involving interviews with political celebrities, in 2012.

In 2015 Stefan Raab announced that he would be retiring from television and decided to further his career in producing.

He has diverted all his focus to production work and his last appearance on camera was on the 19th of December 2015 in an episode of Schlag den Raab.

Since his on-camera retirement, he has gone on to produce multiple episodes for Pro Sieben, such as Das Ding des Jahres, Schlag den Besten, and his most recent Free European Song Contest.

As a singer, Stefan is big news in Europe, but he’s nowhere near as popular nor wealthy as Beyonce, Celine Dion, or Chris Brown, in the rest of the world.

Stefan Raab struggled to find a career that would allow him to explore his talents, but when he did, he hit it big.

His songs were extremely popular and TV audiences loved his zany wit and wacky ideas.

There are no public records of how much Stafen Raab actually earned as a TV celebrity and host. However, his TV shows and songs were so successful that he was able to retire from hosting television shows and focus on his first love, which was producing new songs and shows.

Stefan’s freelance production career took off in 1990 when he opened his own studio, producing advertising jingles and radio commercials.

He really hit his stride when his TV shows became great hits with audiences around the world, sending his income soaring.

Here’s a breakdown of Stefan Raab’s annual net worth:

There is little information available on Stefan’s wealth, but what we do know is that he is extremely wealthy, with various European sources calculating his wealth at between  €80 million and €160 million.

Stefan Raab met Nike Raab in 1997, at a production company called Brainpool TV and got married in 2008.

The couple has two daughters but their names and ages are unknown. Stefan prefers to keep his personal life private and away from the media.

He’s gained plenty of publicity through multiple lawsuits, including a case involving Stefan ridiculing a model named Lisa Loch which resulted in the model receiving horrible phone calls and being mocked by people wherever she went.

The court ruled him guilty and ordered him to pay a fine for infringing her rights.

The next lawsuit was due to an episode where Stefan revealed a photo that was destined to be aired on the news.

He took a photo of a mother holding a cardboard cone with sweets and commented on drug trafficking. This did not go well for Stefan and resulted in him writing an apology and receiving a fine of 20 thousand Euros ($20,000).

Stefan is extremely close-lipped about his private life and you won’t find much on Stefan’s official Instagram account as he only has a single photo posted at the moment.

Over the years, Stefan has been very successful, both as a songwriter and TV producer, and a comedian.

His experience writing jingles and radio commercials came in handy when competing in the Eurovision song contest.

Here are some of the more memorable moments from Stefan Raab’s career:

Stefan’s style of comedy has gained an enormous audience, resulting in worldwide popularity.

However, his fans are mostly based in Germany, where he was able to tap into a lucrative vein of TV gold, that made him a multi-millionaire.

How Does Stefan Raab Spend His Money?

Stefan enjoys a high profile as a media celebrity and has invested in real estate as well as various companies.

He set up his own production company, Raab-TV, which creates a variety of mass-market television programs as well as political and social interest programs.

The production company was a subsidiary of a company called Brainpool which Stefan owned and which he sold for over 9.5 million Euros.

Stefan loves high-powered cars and has been seen in some of the most expensive cars in the world, and he probably needs them to get away from the press.

Stefan’s songwriting credentials are what got him noticed first and he has been at the forefront of the Eurovision Song Contest for years.

His ability to tap into the prevailing trends and social threads that hold society together makes his television programs popular amongst a wide audience.

Here are some of the best highlights of Stefan Raab’s career:

We’re sure that Stefan will continue to lead German television as he explores new trends and keeps his fans coming back for more.

And he is sure to be involved in the Eurovision Song Contest as his songwriting has been extremely successful on the show.

Stefan Raab has a clear idea of what works and what doesn’t. However, it is important to him that he is able to compete, and therein lies his enjoyment of working in the media and music.

Here are our favorite quotes from Stefan Raab:

With Stefan’s love of the Eurovision contest going back to the 1970s, we’re sure that he will continue to write songs that grab his fan’s attention and promote popular German music in the years ahead.

Stefan has always trodden his own path through life, never allowing others to decide what is the right or wrong decision. This has often led him into trouble, but he is always able to rise above it and make a success of his projects.

Now that you know all about Stefan Raab’s net worth, here are some of the best success lessons to learn from Stefan Raab:

1. Sometimes You Have To Push The Boundaries

2. Don’t Let Others Get To You

Despite the controversy surrounding his lawsuits, Stefan never let what other people said get in the way of his professional life.

Stefan had made it his mission to not share his family with the media. This resulted in him having a peaceful retirement away from the prying eyes of the paparazzi.

Stefan may have caused controversies by pushing the legal boundaries, but he still made one of the biggest impacts on the German television industry.

Not only is he a comedic genius, but he’s also an accomplished businessman who made millions with jingles and radio commercials, producing some of the best German television shows ever.

His fans wish that he would return to television, but he’s said that if he were to make a comeback, it’d be to produce a show and not host it.

What do you think about Stefan Raab’s net worth? Leave a comment below.