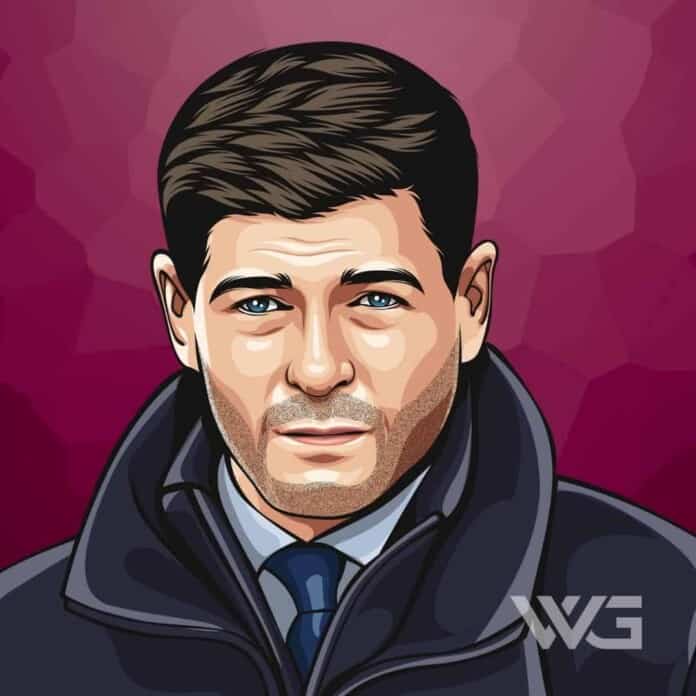 What is Steven Gerrard’s net worth?

Steven Gerrard is a former English professional football manager and former player who manages Scottish Premiership club Rangers. Gerrard is regarded as one of the greatest midfielders of all time.

As of February 2023, Steven Gerrard’s net worth is approximately $90 Million.

Steven George Gerrard was born on the 30th of May, 1980 in Whiston, Merseyside. His cousin Anthony Gerrard is also a professional footballer who plays as a defender for Oldham Athletic.

At the age of nine, he was noticed by Liverpool scouts while playing for his hometown team Whiston Juniors, following which he joined the Liverpool Academy.

At the age of 17, Steven Gerrard signed his first professional contract with Liverpool on November 5, 1997.  During the 1999-2000 season, he scored his first goal in a match against Sheffield Wednesday, which his team won by a 4-1 margin.

Gerrard started his international career in 2000, in a match against Ukraine. Later that year, he was included in the Euro 2000 team; however, he played in one match only, that too as a substitute, against Germany.

He was part of the starting eleven during Euro 2004, but his team was eliminated after losing their quarter-final match against Portugal.

During his first World Cup in 2006, he became the top scorer for England with two goals after his team lost to Portugal again in the quarter-finals.

During Euro 2008 qualifier, he temporarily served as England captain but was later replaced by John Terry after the team failed to qualify for the tournament.

He led England to the 2014 FIFA World Cup, in which the team was eliminated from the group stage for the first time since 1958. He was removed from captaincy in their last group match, and subsequently announced his retirement from international football on July 21, 2014.

Here are some of the best highlights of Steven Gerrard’s career:

“If we play in the right way and do what the manager asks us then we will win games.” – Steven Gerrard

“How can I think of leaving Liverpool after a night like this? I am really happy with the club. I will be having talks with the chairman and the manager shortly, but it is looking good. Liverpool fans are crazy, they were unbelievable, and I’d like to dedicate this victory to them.” – Steven Gerrard

“This club is all about winning trophies and we’ve got a chance of bringing the greatest trophy of them all back to Anfield, so it means a great deal obviously.” – Steven Gerrard

“It will be the proudest moment of my life leading Liverpool out. I’ve dreamed of this day since I was a kid, kicking a ball against the wall in the street where I lived. What could be better than leading Liverpool out for the Champions League final? Only lifting the trophy.” – Steven Gerrard

“I will be the one lifting that trophy, not Paolo Maldini. Imagine me hoisting the trophy. It is an image I have in my mind and I want to make it a reality. We have world-class players and, believe me, they are in the mood to do it. The atmosphere around the club at the moment is just top-class.” – Steven Gerrard

Now that you know all about Steven Gerrard’s net worth, and how he achieved success; let’s take a look at some of the best lessons we can learn from him:

Your ego might tell you to “let these people go” but what does your heart tell you? We are all humans, we all make mistakes, and we all deserve a second chance, and why not, maybe a third, fourth, a sixth and a seventh.

If you think life is unfair, and that bad thing always happens to you, chances are that life will treat you unfairly, and you will always have many reasons to complain about.

How much is Steven Gerrard worth?

Steven Gerrard’s net worth is estimated to be $90 Million.

How old is Steven Gerrard?

How tall is Steven Gerrard?

Steven Gerrard is a former English professional footballer who spent most of his 18-year-long career playing for Liverpool. He is one of the best midfielders of his time, he has scored a total of 125 goals during his senior club career and 21 goals for his national team.

As of February 2023, Steven Gerrard’s net worth is roughly $90 Million.

What do you think about Steven Gerrard’s net worth? Leave a comment below.