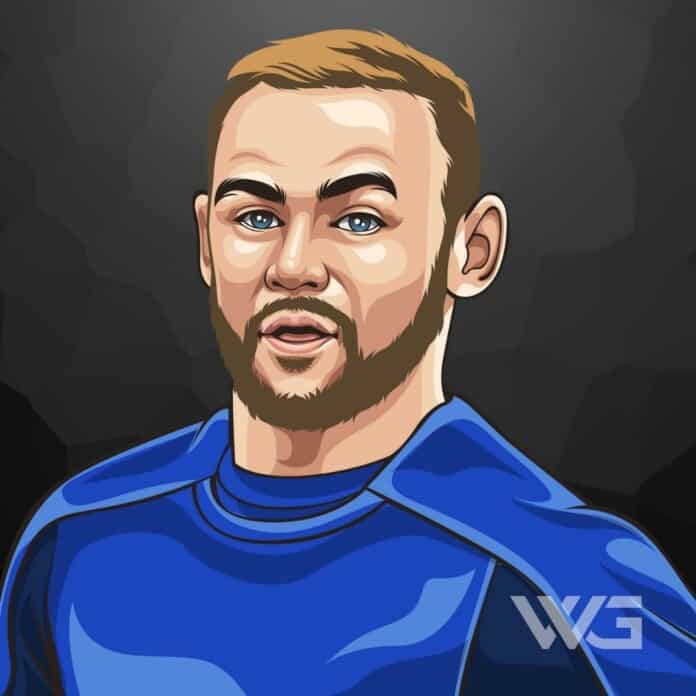 What is Wayne Rooney’s net worth?

Rooney has played much of his career as a forward, and he has also been used in various midfield roles. He is the record goalscorer for the England national team, and for Manchester United.

As of February 2023, Wayne Rooney’s net worth is approximately $170 Million, making him one of the richest soccer players in the world.

Wayne Mark Rooney was born in Croxteth, Liverpool on the 24th of October, 1985. He is the son of Jeanette Marie and Thomas Wayne Rooney. Wayne is of Irish descent and was brought up as a Roman Catholic.

Rooney grew up in Everton with his family and his younger brothers, Graham and John. All the three brothers attended Our Lady and St Swithin’s primary school and Da La Salle School.

Wayne Rooney made his soccer debut for Manchester United in 2004. He scored a hat-trick in a 6-2 victory and was hailed as a sensational debutant. two years later, Rooney scored twice in his team’s 4-0 win over Wigan Athletic in the final.

Rooney scored a hat-trick against Bolton Wanderers, and by the end of the season, he had scored 14 league goals. He finished the season with 18 goals and starred in his team’s victory over Chelsea and which Manchester United clinched the Champions League.

In 2011, Rooney scored again against Manchester City in a derby and within a few weeks, he scored the third goal in a 4-0 win over Wigan Athletic. The first of the hat-trick was also his 150th goal for Manchester United.

As of February 2023, Wayne Rooney’s net worth is estimated to be roughly $170 Million.

Here are some of the best highlights of Wayne Rooney’s career:

“Part of my preparation is I go and ask the kit man what color we’re wearing – if it’s red top, white shorts, white socks or black socks. Then I lie in bed the night before the game and visualize myself scoring goals or doing well.” – Wayne Rooney

“You’re trying to put yourself in that moment and trying to prepare yourself, to have a ‘memory before the game. I don’t know if you’d call it visualizing or dreaming, but I’ve always done it, my whole life”. – Wayne Rooney

“I’ve learned that it is important not to go over the top with aggression, because then either you are going to miss a lot of games, or you are not going to be concentrating on the game you are playing.” – Wayne Rooney

“When famous people come up to you it’s a bit weird, but it’s an honor, really, when they recognize you and want to chat to you for a bit.” – Wayne Rooney

“There are many ways to grow football-wise. You go slow or are pushed to go faster, otherwise, you get left behind. For me, there would be trouble in stopping learning.” – Wayne Rooney

“For me, Scholesy’s the best footballer England has produced in my time. The way he controlled games, passed the ball, saw things that other players didn’t see; it was a pleasure to play with him and United was lucky to have him for so long.” – Wayne Rooney

View our larger collection of the best Wayne Rooney quotes!

3 Rules for Success from Wayne Rooney

Now that you know all about Wayne Rooney’s net worth, and how he achieved success; let’s take a look at some of the lessons we can learn from him:

1. Learn From The Past

You can learn more from the lows than the highs. The highs are great but the lows make you really look at things in a different way and want to improve. Every player will have both in their careers and I have, but what you get is that experience which is so important to perform at your best.

Becoming a dad means you have to be a role model for your son and be someone he can look up to.

How much is Wayne Rooney worth?

Wayne Rooney’s net worth is estimated to be $170 Million.

How old is Wayne Rooney?

How tall is Wayne Rooney?

Wayne Rooney is, without a doubt, one of the best soccer players of all time. Rooney has influenced many and won numerous of awards throughout his career as an incredible soccer player.

As of February 2023, Wayne Rooney’s net worth is estimated to be roughly $170 Million, making him one of the richest soccer players in the world.

What do you think about Wayne Rooney’s net worth? Leave a comment below.

Power forward Dorian Finney-Smith has been playing for the Dallas Mavericks since 2016 and, in that time, has earned a remarkable fortune for his talent.