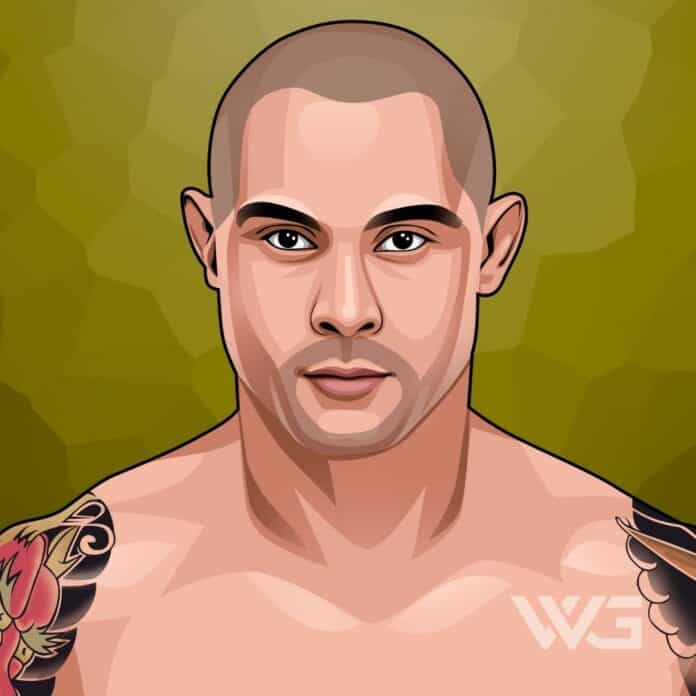 What is Thiago Anderson Ramos da Silva’s net worth?

Silva won seven of his 12 fights while with the Ultimate Fighting Championship from 2007 to 2013.

As of January 2023, Thiago Anderson Ramos da Silva’s net worth is estimated to be $5 Million.

Thiago Anderson Ramos da Silva was born November 12, 1982 in São Paulo, Brazil, living with almost no money in the favelas of the city.

Silva ran away from home as a teenager and lived at a friend’s home while working to make ends meet, but couldn’t afford both food and training.

Thankfully for Silva, he was able to get into mixed martial arts as his instructor allowed him to train in exchange for cleaning the gym.

After several years of perfecting his mixed martial arts skills, Silva entered into the professional ranks and won his debut in 2005.

Thiago Silva got off to an amazing start in his professional career, defeating the likes of Vitor Vianna and Tatsuya Mizuno to start 9-0 in his career.

In 2007, he made his UFC debut by defeating James Irvin, and would go on to fight with the promotion through 2013.

Silva won a majority of his matches, but UFC president Dana White did not give him a title shot, and he left due to personal issues in 2014.

Afterward, Silva won matches against fighters including James McSweeney and Jared Torgeson, winning a total of 21 out of 33 professional matches.

In most cases, professional fighting promotions don’t disclose how much money their athletes are getting paid, but that’s not the case for the Ultimate Fighting Championship.

Though his time with the promotion was limited, Silva was able to amass a solid amount of money over his 12 matches.

Silva made a total of $861,259 in UFC payout money, with hundreds of thousands more coming from promotions including Eagle FC and World Series of Fighting.

Between his estimated and confirmed payouts, as well as his endorsement deals, Thiago Silva has an estimated net worth of $4 million.

Thiago Silva was married from 2004 to 2014 to MMA fighter Thaysa Kamiji Silva and the couple had two children together.

However, their marriage ended tumultuously in 2014 when Silva was arrested for threatening Thaysa Kamiji Silva.

Things got worse as Silva allegedly threatened two children that were in the gym, as well as the gym’s owner Pablo Popovitch.

Thiago Silva has had a long career in mixed martial arts, fighting professionally with several promotions.

Silva began racking up wins early on, and although his list of championships is short, he still made a big impact on the spot.

It seemed in 2019 that Silva had fought his last match after losing to Martin Zawada, but he returned in 2022 to continue his career.

Silva has sought out champions in the past including Forrest Griffin and Anderson Silva, though UFC president Dana White didn’t give him a title shot.

How Does Thiago Anderson Ramos da Silva Spend His Money?

Though he was never a UFC champion, Thiago Silva would still get close to the list of richest MMA fighters in the world thanks to his long career.

Silva has never been a big spender, and opted to skip over the most expensive watches in the world as he was more interested in tattoos.

When it comes to his home, Silva is a house in Boca Raton, Florida that’s estimated to be over $500,000 so he has some nice digs.

Throughout his career, Silva has been one of those mixed martial artists that doesn’t talk much about money, and simply wants to fight.

Thiago Silva had a rough upbringing in Brazil, but highlights started coming early and often once he hit adulthood.

The beginning of Silva’s professional career was filled with a long list of milestones, and many were wondering if he’d ever lose.

Here are some of the best highlights of Thiago Anderson Ramos da Silva’s career:

While Silva’s career cooled off after he left the UFC, he still has had a lot of memorable moments over the years.

From headlining UFC Fight Night to taking on some of the biggest names like Rashad Evans and Lyoto Machida, Silva has done it all.

Thiago Anderson Ramos da Silva is a man of few words, but isn’t afraid to speak his mind when pushed.

Media members like Joe Rogan want to get great quotes from Silva after his matches, and once in a while it happens.

Thiago Silva may share his name with one of the most well-known soccer players in the world, but the two don’t have much in common.

Silva took his own path to the highest ranks of professional mixed martial arts, and although he squandered his time in the UFC, he

Now that you know all about Thiago Anderson Ramos da Silva’s net worth, there’s much to learn from the Brazilian mixed martial artist.

Here are some of the best success lessons to learn from Thiago Anderson Ramos da Silva:

1. You Can Overcome Your Upbringing

Thiago Silva had to get through a lot as a child to make it as a professional mixed martial artist, including an abusive father.

In fact, he ran away from home despite not having a house to stay in, taking a chance on a better life.

Silva wound up scraping by early on, but was able to overcome the odds to earn a spot in mixed martial arts and become a millionaire.

Just like fighters including BJ Penn and Chael Sonnen, Thiago Silva has never been one to back down from a potential fight.

Silva got to fight some of the biggest names, and even offered himself to go against other champions to make a name for himself.

Showing no fear and wanting the best opposition in front of you is the best way to learn and get ahead as it shows you where you need to be.

When Thiago Silva allegedly threatened multiple people during his UFC career, many thought he was done for good.

Silva needed a second chance to make it in the professional ranks, and the Brazilian mixed martial artist got just that.

Since then, Silva has been able to keep his nose clean and continue his fighting career, proving that he always belonged.

Thiago Silva has had a long career in mixed martial arts that’s now on-again, off-again due to his desire to get back into the octagon during retirement.

Almost every fighting fan knows about Silva and his checkered past, but also respect him as a menacing fighter.

Silva has made millions thanks to his ruthless aggression in the professional ranks, and has plenty to sit back on if he decides to stay in retirement.

As of January 2023, Thiago Anderson Ramos da Silva’s net worth is estimated to be $5 Million.

What do you think about Thiago Anderson Ramos da Silva’s net worth? Leave a comment below.