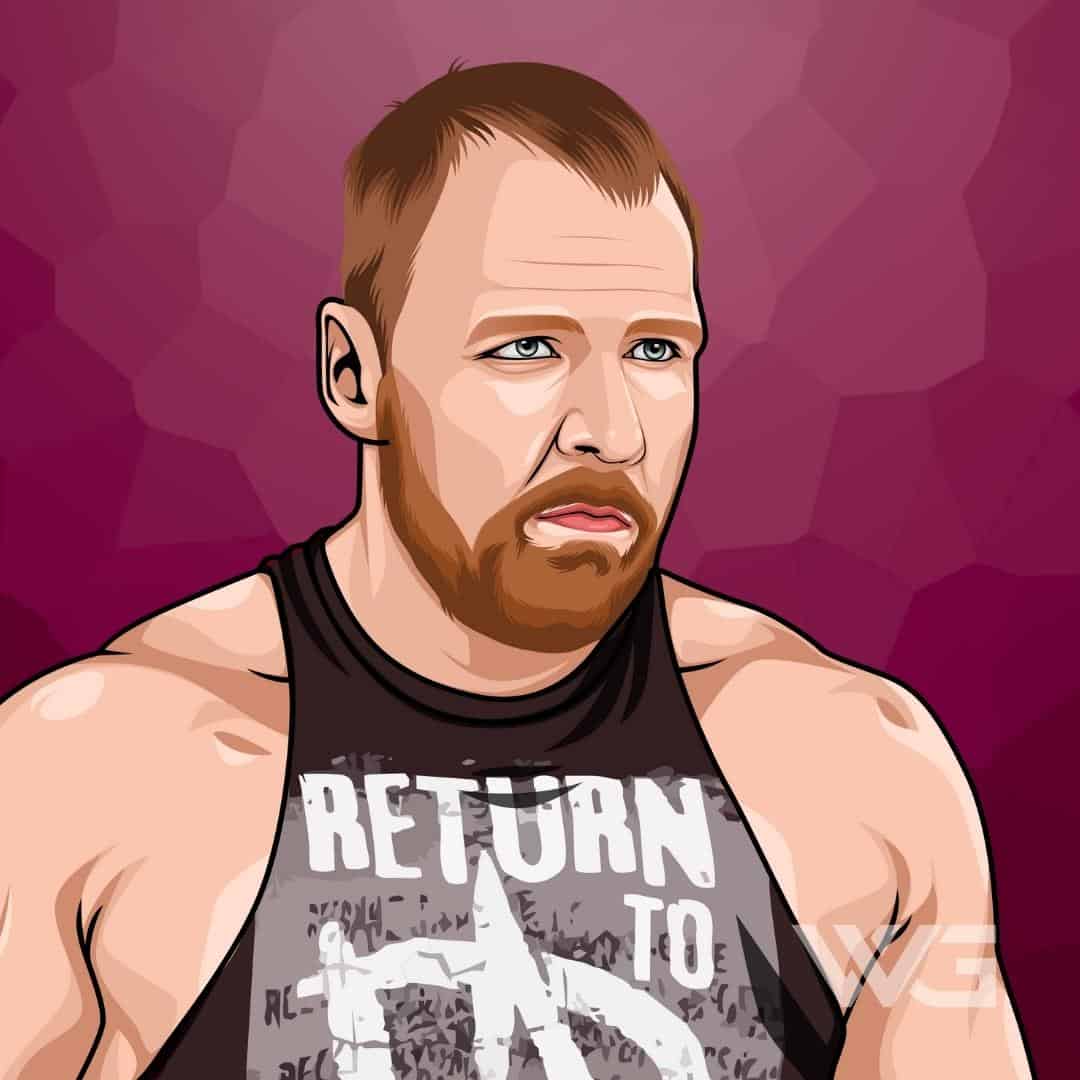 What is Dean Ambrose’s net worth?

Jonathan Good previously fought under the ring name “Dean Ambrose”. He is a professional wrestler who currently fights in the WWE using his new ring name, “Jon Moxley”.

It doesn’t come as a surprise that Dean Ambrose has such a high net worth as he’s been involved in the professional circuit for many years, having started out as a popcorn seller and ring hand in 2004. He’s managed to throw off the poverty of his childhood years to become one of the most talented wrestlers in the world.

As of February2023, Dean Ambrose’s net worth is estimated to be $7 Million.

Dean grew up in a rough neighborhood in Cincinnati, where poverty was a daily struggle. Due to a lack of money, shoplifting was a daily occurrence for Dean and his friends. As he got older, he worked minimum-wage jobs to help make ends meet.

He did not complete his education at Amelia High School, rather dropping out to pursue his career in wrestling. As an escape from his unhappy circumstances, Dean emersed himself in the history of wrestling, reading books and watching videos of his heroes. His favorite wrestler was the legendary Bret Hart, who is currently associated with WWE.

Unfortunately, during his teenage years, Dean used drugs to cope. He often lost his minimum wage jobs due to skipping work to attend wrestling matches. From the moment he started wrestling he was hooked, and the talented teen started climbing the wrestling ladder.

Dean’s first step into the world of pro wrestling was with Heartland Wrestling Association. Even though he was only selling popcorn and helping set up the ring, Dean threw himself into becoming a professional wrestler, training hard under HWA wrestler, Cody Hawk. His hard work and dedication paid off and he turned professional at 18 years old. He debuted in 2004 as Jon Moxley. Such was his talent that, in 2005, he twice won the HWA Tag Team Championship.

Teaming up with his former wrestling partner Hade Vansen, he won the IWA World Tag Team Championship in 2006.

Dean added to his skillset and technique by getting involved in the Ring of Honor, where he wrestled in multiple matches from 2007 to 2009.

In 2011, Dean signed a deal with WWE which resulted in him joining Florida Championship Wrestling. His debut on television was on an episode of FCW’s developmental territory.

Dean was promoted as an aggressive character in WWE, and it’s not hard to understand why. But with this character, he was acting as if he was provoking arguments with top wrestlers to see what the outcome would be.

In October, on the FCW series, Dean called out CM Punk. Dean was ultimately defeated but ended up being roundly praised by CM Punk after the match.

This defeat didn’t stop him though, as he went on to provoke William Regal. But Dean ended up losing this match too. After the match, Dean would go on to obsess over a rematch.

He got his revenge by defeating William Regal in a rematch on the final episode of FCW.

Dean Ambrose has an income in the region of $850,000 to $900,000 per year. With his extraordinary talent, it is believed that it will not be long before he receives a significant increase in his salary.

With his quality performances and obvious talent for getting the crowd riled up, his income is sure to skyrocket over the coming years.

Dean Ambrose has come up through the ranks of the world’s best wrestlers. In the process, he has earned a fantastic salary which increases his net worth substantially each year.

Apart from his salary, Dean Ambrose receives income from endorsements and his investment portfolio.

Here’s a breakdown of Dean Ambrose’s annual net worth:

On the 9th of April 2017, Dean decided to marry his long-term sweetheart Renee Pacquette in the early hours of 1 am. They are parents of a daughter, Nora Murphy Good, who was born on the 13th of June 2021. With all of Dean’s successes, he was able to buy a home for his mother, allowing her to get out of the rough neighborhood they had both grown up in.

In 2018, Dean suffered a bad arm injury during a match. He moved to Birmingham, Alabama for a short period, to be closer to his doctors. Dean has revealed that the injury was so infected, that he could have died had he not received medical help.

With his background of substance abuse, Dean was struggling to cope and checked himself into rehab in 2021 to address his alcoholism.

Dean refers to himself as a loner and does not believe in sharing his life on social media. He has a Twitter account and an official Instagram account but rarely interacts with them. Dean currently lives with his wife and daughter in Cincinnati, Ohio.

Anyone who watched Dean Ambrose as a junior saw the potential in this motivated athlete. While he may not be amongst the richest wrestlers in the world, his hard work and dedication improved his natural athletic ability to make him a star performer.

Here are some highlights from Dean Ambrose’s career:

How Does Dean Ambrose Spend His Money?

Dean has not forgotten where he came from and is known to make many generous donations to multiple charities.

He is a selfless character who puts others first. His most recent donation is to a Go Fund Me set up to assist independent wrestlers who were laid off because of the pandemic.

Dean is a true ambassador of the sport, with all sales of his WWE products being donated to charity.

You certainly won’t find him buying the most expensive cars in the world or jet-setting around.

From his early days as a novice wrestler, Dean hoped to emulate his idols, the early heroes of wrestling.

Through hard work and dedication, he became the idol of adoring fans. He has come full circle, being a role model to youngsters from backgrounds just as poverty-stricken and stark as his own.

He now commands an impressively high salary to perform in the wrestling arena.

Here are some of the best highlights of Dean Ambrose’s career:

Dean is no stranger to the microphone and is a consummate performer. His brawn and aggressive nature on stage mask his true personality. Beneath the aggro is an athlete with a huge heart. He may act tough, but his generosity is legendary.

Here are our favorite quotes from Dean Ambrose:

You don’t reach the heights of a dangerous profession without dedication and a firm grasp of the core mental aspects that distinguish elite athletes. He is laser-focused on his job, yet remains an intensely private, family man.

Here are some of the best success lessons to learn from Dean Ambrose:

1.  Don’t Let Your Background Hold You Back

No matter your background, if you work hard, you can achieve anything. Dean is a living testimony to this way of thinking.

3. Keep Going No Matter How Tough It Is

After a lifetime of struggling against the odds, no one knows just how tough life can be as much as Dean Ambrose. He lives by the mantra that you can get through anything, no matter the struggle.

Dean Ambrose is looked at as a role model to those who have it rough. He started from nothing in a difficult town but fought tooth and nail to get to where he is today. He continues to follow his dream of wrestling and is only going up.

No matter the battle to get to where he is, Dean is one of the best wrestlers in the world. He continues to give back to the community by donating large amounts to charity. Dean will always be known as the legend of Pro wrestling and has proved his abilities in wrestling.

Fans remember him as the Shield member that most impacted the wrestling world.

As of February2023, Dean Ambrose’s net worth is estimated to be $7 Million.

What do you think about Dean Ambrose’s net worth? Leave a comment below.