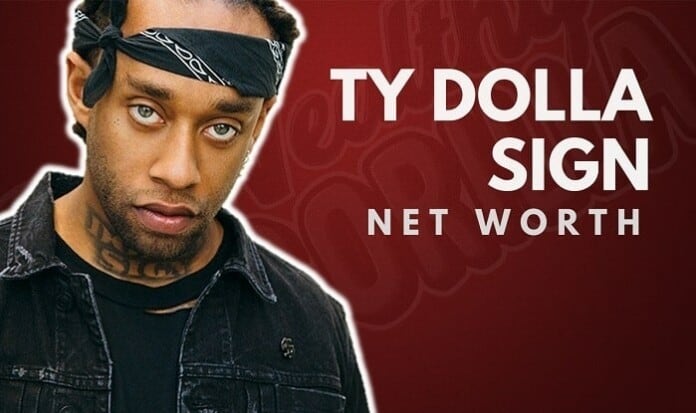 What is Ty Dolla Sign’s net worth?

As of February 2023, Ty Dolla Sign’s net worth is estimated to be roughly $5 Million.

Tyrone William Griffin Jr., “Ty Dolla Sign”, is an American rapper, singer, record producer and songwriter from Los Angeles. He is best known from his singles ‘Paranoid’, ‘Or Nah’ and ‘Blase’.

Aside from his solo career as a successful rapper, Ty Dolla Sign is also a member of the production team D.R.U.G.S.

Tyrone William Griffin Jr. was born in Los Angeles, California on the 13th of April, 1985.

His interest in music started when his father Tyrone Griffin introduced him to soul music. He began his music career by learning how to play the guitar.

Ty Dolla Sign later signed a record deal with Venus Brown which helped him and his friend, Kory, to release their first mixtape. After that, he signed with Atlantic Records in 2012 which was a big breakthrough in his musical career.

Ty Dolla Sign began his career by signing a record deal with Venus Brown and Buddha Brown Entertainment. He later got an opportunity to release a mixtape ‘Raw & Bangin Mixtape Vol 2’ in 2007.

A few years later Ty Dolla Sign started to work with rapper YG where he featured in YG’s hit song ‘Toot It and Boot It’.

In 2012 he signed a contract Atlantic Records and released his first solo mixtape.

Later that year, Ty Dolla Sign signed a deal with Wiz Khalifa’s Taylor Gang Records. The next year he released a single ‘Paranoid’ which later became the first single of his debut EP. The following year his second single ‘Or Nah’ was released which also was included in his debut EP.

A few years later he released his mixtape ‘Sign Language’ and also appeared on the track ‘Nothing Like Me’ and ‘Play No Games’ in Tyga and Chris Brown’s Fan of a Fan: The Album’ the following year.

In 2016, Tyga Dolla Sign featured in Fifth Harmony’s single ‘Work from Home’ and ‘Sucker for Pain’ which was the soundtrack of the motion picture ‘Suicide Squad.

Here are some of the best highlights from Ty Dolla Sign’s career:

24K on my dinner plate, Yeah, that’s all gold everything. Money over everything, be your best friend be your zaddy. Girl Yeah, I could your everything. Get you anything but a wedding ring. Pull up in that Medellin. That coke white and that’s Off-White/Guess the supermodels only fuck twice. – Ty Dolla Sign

“For those of you that don’t know, the reason I named my album ‘Free TC’ is because my lil‘ brother is named TC. He’s locked up for something that he didn’t do, and what I’m trying to do is just raise awareness around the whole mass incarceration thing going on in our country, especially with our people.” – Ty Dolla Sign

“I’ve got all of the old school vinyl from the ’70s – even further back, like the jazz music in the ’40s, ’50s, ’60s. Then I’ve got all the ’80s stuff underground, hip-hop when hip-hop really first started. The ’90s stuff. All of the good stuff, because I’m really into music, and it helps me create new songs now.” – Ty Dolla Sign

“I used to go to the Church of the Harvest, right off Adams and La Brea. There was a pastor there who had the best big choir and the best band. He would start praying, and the music would start playing and just make people feel so good, you could break out of whatever you were going through. Soft music can have that effect, too.” – Ty Dolla Sign

Ty Dolla Sign’s net worth is estimated to be $5 Million.

Ty Dolla Sign is one of the most trending and popular rappers right now. He has collaborated with stars including likes of Wiz Khalifa, Tinashe, and The Weeknd. There is no doubt that his net worth will continue to increase in his future career as a successful rapper.

As of February 2023, Ty Dolla Sign’s net worth is estimated to be $5 Million.

What do you think about Ty Dolla Sign’s net worth? Leave a comment below.

What is Lele Pons' net worth? Introduction  As of ,...