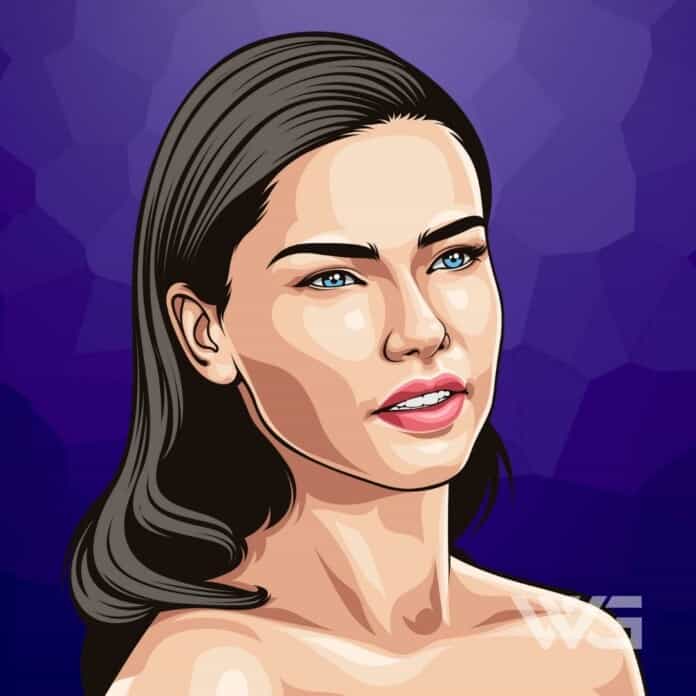 What is Adriana Lima’s net worth?

Adriana Lima is a Brazilian model and actress from Salvador, Brazil. Lima is best known as a former Victoria’s Secret Angel from 1999 to 2018.

She has also been named “the most valuable Victoria’s Secret Angel. At the age of 15, Lima won Ford’s “Supermodel of Brazil” competition, and took second place the following year in the Ford “Supermodel of the World”.

Adriana Lima was born on the 12th of June, 1981, in Salvador, Brazil. Lima is the daughter to Nelson Torres and Maria da Graca Lima.

During her elementary school, she won many beauty pageants but did not consider pursuing a career in modeling.

However, at 13, she entered Ford’s ‘Supermodel of Brazil’ where she finished in the first place.

Lima’s career began in 2000 when she became an official ‘Guess’ girl and did many ad campaigns for it. Three years later, she joined ‘Maybelline’ as a spokesmodel where she continued till 2009. In the same year, she appeared in the company’s first calendar and also did an ad campaign for swatch.

She worked has worked for fashion brands such as ‘Bebe’, ‘Armani’, ‘Versace’, ‘BCBG’ and ‘Louis Vuitton’. She has also appeared on the covers of fashion magazines such as, ‘Harper’s Bazaar’, ‘Elle’, ‘GQ’, ‘Arena’, ‘Vogue’, ‘V’, ‘Esquire’, and ‘French Revue des modes’.

In 2001, she bagged her first acting role in ‘The Follow’, a short film in BMW series ‘The Hire’ where she played a damsel in distress, appearing alongside Clive Owen, Mickey Rorke, and Forest Whitaker.

Over the next few years, she modeled for some of the biggest brands, such as for Vogue Eyewear and Marc Jacobs’ fragrance ‘Decadence’, in 2015; Italian lingerie brand Calzedonia’s Swimwear collection, in 2016; and Italian ready-to-wear clothing brand, Sportsmax, in 2017.

Here are some of the best highlights of Adriana Lima’s career:

“I’m a teenager, but I’m independent – I have my own apartment, I have my own life. And I think I have learned more than any of those teenagers have in school. I learned to be responsible, leaving my family and coming here alone.” – Adriana Lima

“”I remember Tyra Banks giving me encouraging advice during my first Victoria’s Secret commercial shoot. I was so nervous, and she told me to just relax and be confident – that made me feel very comfortable.” – Adriana Lima

“If you’re having dinner with friends and they’re always on the phone or always texting, it’s just impolite. Unless it’s something important – like someone is in the hospital or something – don’t do it.” – Adriana Lima

“Be sure what you want and be sure about yourself. Fashion is not just beauty, it’s about good attitude. You have to believe in yourself and be strong.” – Adriana Lima

“I love challenges, I love the intensity, and I also like to challenge my mind. Believe it or not, boxing is not only about physical force. You use a lot of concentration; it’s really mental.” – Adriana Lima

Now that you know all about Adriana Lima’s net worth, and how she achieved success; let’s take a look at some of the lessons we can learn from her about beauty:

At this point, scrubbing your face clean every night should be a given.

But sometimes deadlines, the third glass of rosé, or life itself gets in the way. “Most women are at a stage in their career where they’re working hard, long hours and don’t feel like they have enough hours in the day to spend on themselves,”

Colors come and go, but nothing can touch the classic cool of red lips. The tricky part? Finding the right shade for you.

“Women with fair, cooler skin tones can opt for bluer reds, like ruby and claret, while medium to warmer complexions can delve deeper into brick and rusty types of shades. If you’re lazy, or basically color-blind when it comes to lipstick tones, opt for a balanced shade that’s neither too blue nor too orange.”

Taking care of your skin doesn’t stop after you slather on your night serum. “Erratic sleep schedules, alcohol, and unhealthy diets can take a toll on the skin,” she says.

Making healthy decisions on a big-picture scale can pay off in the form of brighter, smoother skin.

How much is Adriana Lima worth?

Adriana Lima’s net worth is estimated to be $95 Million.

How old is Adriana Lima?

How tall is Adriana Lima?

Adriana Lima is best known for being a former Victoria’s Secret Angel. Her understanding of professionalism and incredible physical appeal has earned her the right to be counted among the best in her profession.

What do you think about Adriana Lima’s net worth? Leave a comment below.