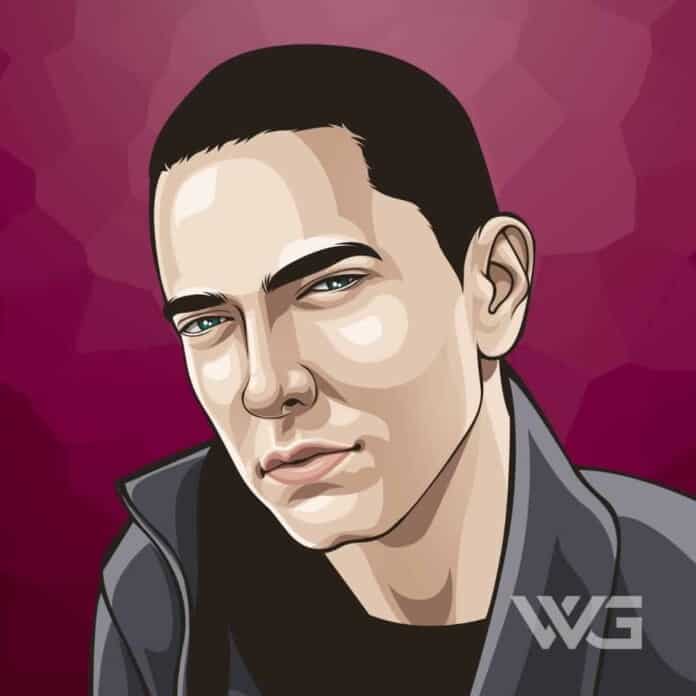 What is Eminem’s net worth?

As of February 2023, Eminem’s net worth is estimated at $230 Million. This makes him one of the richest rappers in the world, next to the likes of Dr. Dre, Sean Combs, Jay Z and more.

Eminem, AKA Marshall Mathers, AKA Slim Shady, is an American rapper, originally from Missouri. He is without a doubt, the most notorious and influential white rapper in hip-hop, challenging the stereotypes of rap music.

Eminem is now 44 years old, one of the best-selling hip-hop artists of all time.

Marshall Mathers was born in St. Joseph, Missouri on the 17th of October 1972. His father Bruce left them and moved to California to start a new family. Eminem had a rough childhood and was often bullied and beat up in school.

When his family was living in Detroit, their home was in a majorly black neighborhood, and thus Eminem was also victim to racial beatings during that time.

Before he discovered hip-hop, he was first very passionate about comic books and storytelling. He dropped out of Lincoln High school at 17 years old and worked various jobs to help pay the bills.

His mother would often throw him out of the house, and neglect him. Whenever she went to play Bingo, Eminem would turn up his stereo and start writing songs.

Eminem started performing at rap battles with his friend Mike Ruby when he was only 14. Later on, as his reputation grew, he was recruited by several rap groups, including New Jacks, Soul Intent, and D12.

His first solo album, ‘Infinite’, was released in 1996, and was a failure; majorly due to Eminem’s style, and the feelings people had towards it at that time. He was told that his style was not cut out for hip hop and that only motivated him to keep on writing more rhymes.

In 1997, he was spotted by Dr. Dre, the founder of Aftermath entertainment, and began working with him. Two years later, The Slim Shady LP was released and went Platinum.

Since then, Eminem has released multiple albums and sold over 40 million copies in the US alone. He’s collaborated with a wide number of artists and even starred in a movie based on his story.

Today, Eminem is considered to be one of the best, if not the best, rappers of all time. He’s worked with just about every musician you can think of, including the likes of Ed Sheeran, 50 Cent, Lil Wayne, Rihanna, Drake, and more.

How much money is Eminem worth?

As of February 2023, Eminem’s net worth is roughly $230 Million, putting him high up on the list of richest rappers of all time.

How Does Eminem Spend His Money?

Eminem purchased one of his homes for $2 million. He is a big fan of cars as well. We begin with the Porsche Carrera GT with its price of $448,000. He has another Porsche and it can be picked up new for around $184,000.

Moving onto Eminem’s Ferrari Collection now and his Ferrari 599 GTO is truly a beast of a car worth an estimated $371,000. It is the third Ferrari in the GTO range and follows on from the 250 GTO and the 288 GTO.

Here are some of the best highlights of Eminem’s career:

“Dealing with backstabbers, there was one thing I learned. They’re only powerful when you got your back turned.” – Eminem

“Anybody with a sense of humor is going to put on my album and laugh from beginning to end.” – Eminem

“The truth is you don’t know what is going to happen tomorrow. Life is a crazy ride, and nothing is guaranteed.” – Eminem

“I think my first album opened a lot of doors for me to push the freedom of speech to the limit.” – Eminem

“To the people I forgot, you weren’t on my mind for some reason and you probably don’t deserve any thanks anyway.” – Eminem

View our larger collection of the best Eminem quotes!

Now that you know Eminem’s net worth, you’ve learned more about his story.

As well as the success he’s managed to build as a hip-hop artist, not to mention becoming the most notorious white individual in rap; what does Eminem attribute to his success, and what can we learn from him?

Here are some of the best success lessons to be learned from Eminem:

1. Don’t be afraid to be different

When Eminem first started performing at battle raps, he was one of the only white performers. He was victim to a lot of stereotypical harassment, centered about the thought that white people can’t rap. He proved a lot of people wrong, there’s no doubt about that.

2. Your past does not have to determine your future

Marshall suffered from a lot of bullying when he was younger, always moving from place to place, and never really staying in one spot long enough to make friends.

He could have let these experiences dictate how his life was going to turn out; but instead, he used them as motivation.

3. Stand up for yourself

I don’t think that Eminem would be where he is today if he didn’t stand up for himself and for his dreams. Knowing what he wanted, and believing in exactly that, fuelled him for success. Despite people trying to tell them what he could and couldn’t accomplish.

We mentioned above, just how many people Eminem has collaborated with in his career. And it’s a lot. In fact, when you look at some of his most recent albums, he’s actually made it his mission to collaborate with other artists on each of his songs.

He’s done an excellent job of collaborating with other people, and that has allowed him to gain opportunities which produce different styles of music, and help promote his albums to the respective audiences.

If you take a look at the work Eminem produced early on in his career, and compare it with his most recent work; you’ll see that the type of music he produces, and the topics he raps about have changed.

Which is interesting, intriguing, and makes for the perfect story of progression both in music and his personal life. The lesson here is don’t be afraid to adapt. You don’t have to continue doing the exact same thing that made you successful in the first place.

1. Eminem was still making payments on his trailer home when the Slim Shady LP dropped.

2. Eminem doesn’t allow people to curse in his home, and he won’t swear in front of children.

3. Eminem said he used to spend hours every night studying the dictionary, so he could expand his vocabulary for his rhymes.

4. Before he became a rapper, Eminem’s true dream was to become a comic book artist.

5. Eminem got evicted the night before the 1997 Rap Olympics, and had to break into his own place and sleep on the floor before leaving for LA.

How much is Eminem worth?

Eminem’s net worth is estimated to be $230 Million.

How old is Eminem?

How tall is Eminem?

Well, Marshall Mathers is one of the most successful hip-hop artists in history and one of the 20 richest rappers worldwide.

He’s inspired many other artists to climb through the ranks, and he’s also helped people all over the world in dealing with the problems they face in life.

What do you think of Eminem’s net worth? Leave a comment below.