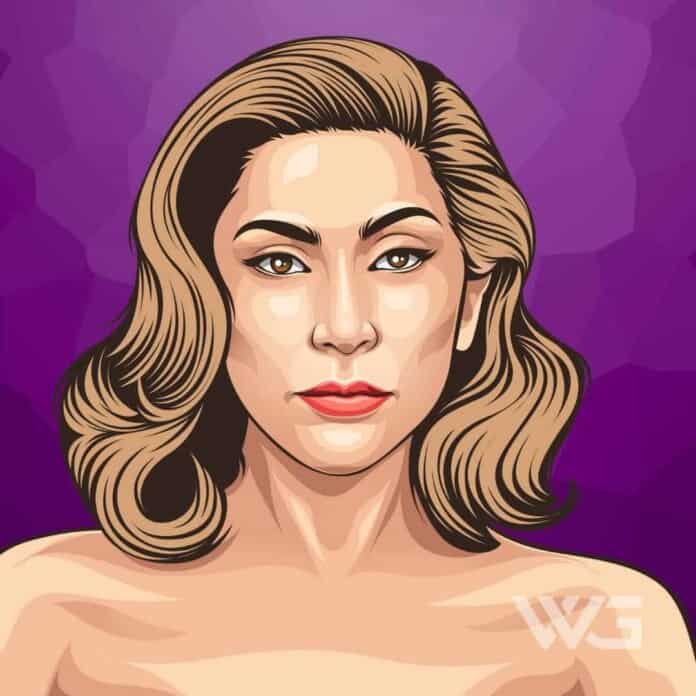 What is Lady Gaga’s net worth?

As of February 2023, Lady Gaga’s net worth is approximately $320 Million and she is currently signed to Interscope Records.

She initially gained recognition when she released her first debut single ‘Just Dance’ in 2008 which went viral. Today Gaga is one of the best female pop singers in the world.

Stefani Joanne Angelina Germanotta “Lady Gaga” was born in New York City on the 28th of March, 1986. Gaga was born to a Catholic family with French, Italian and Candian roots.

She has a younger sister named Natali and Gaga’s parents are Cynthia Louise and Joseph Germanotta.

Gaga began playing the piano when she was 4 and she always had a big interest in music. At the age of 17, she attended Tisch School of Arts where she studied music.

In 2014 Gaga said that she had been raped at the age of 19 for which she underwent physical and mental therapy for.

Lady Gaga’s career started when she first collaborated with the American hip-hop artist Melvin Grover on an audiobook aimed at children. Gage even formed a band named ‘SG Band’ for which she joined hands with a few friends like Eli Silverman and Alex Beckmann.

Gaga started to move between New York and New Jersey in a bid to record new songs that she had written for Fusari. Apparently, it’s Fusari who gave Gaga her stage name when he was inspired by the famous song ‘Radio Gaga’.

In 2007 Gaga signed to ‘Interscope Records’, she worked mainly as a lyricist and penned several songs for the celebrity singers associated with the music label. A few of these people include ‘The Pussycat Dolls’ and Britney Spears.

Her big breakthrough came in 2008 when she released her first single ‘Just Dance’. The song went viral and she quickly became a popular icon for the music industry, for her clothing style and her music.

In 2009 she released ‘The Fame Monster’ which became a chartbuster. Gaga also staged a concerts ‘Monster Ball’ which was held in Madison Square Garden where she earned $220 million.

Here are some of the best highlights of Lady Gaga’s career:

“I had a boyfriend who told me I’d never succeeded, never be nominated for a Grammy, never have a hit song, and that he hoped I’d fail.” – Lady Gaga

“I’m already crazy. I’m a fearless person. I think it creeps up on you. I don’t think it can be stopped. If my destiny is to lose my mind because of fame, then that’s my destiny. But my passion still means more than anything.” – Lady Gaga

“A girl’s got to use what she’s given and I’m not going to make a guy drool the way a Britney video does. So I take it to extremes. I don’t say I dress sexily on stage – what I do is so extreme. It’s meant to make guys think: ‘I don’t know if this is sexy or just weird.” – Lady Gaga

“Tonight I want to forget all your insecurities. Tonight I want you to reject anyone or anything that has made you feel like you don’t belong, or don’t fit in, or has made you feel like you’re not good enough or pretty enough or thin enough, or like you can’t sing well enough or dance well enough, or write a song well enough, or like YOU’LL NEVER WIN A GRAMMY, or like YOU’LL NEVER SELL OUT MADISON SQUARE GARDEN! You just remember that you are a god damn superstar and you were born this way!” – Lady Gaga

Now you know all about Lady Gaga’s net worth, and how she achieved success; let’s take a look at some of the lessons we can learn from her:

1. Focus on Your One Percenters

Gage spends her effort on just one percent of her audience. Despite her tens of millions of fans in social media, she focused on the die-hard fans that make up a small but valuable part of the fan base. Focus on your percenters.

Standing up for issues and sharing your values. Leading with values is not always easy, but when done with integrity and commitment customers will reward you with their loyalty. Lead with values.

Lady Gaga has built her own network for the die-hard fans called Littlemonsters.com. In that way, you can build your own social network whatever you do in life, which people around you can be a part of.

How much is Lady Gaga worth?

Lady Gaga’s net worth is estimated to be $320 Million.

How old is Lady Gaga?

How tall is Lady Gaga?

Lady Gaga has influenced people all over the world to be themselves. She is the perfect example of a role model and she has worked with some of the best artists and producers in the world.

What do you think about Lady Gaga’s net worth? Leave a comment below.

Formula One champion Nico Rosberg started his racing career at a young age and has since earned millions as an extremely talented driver.