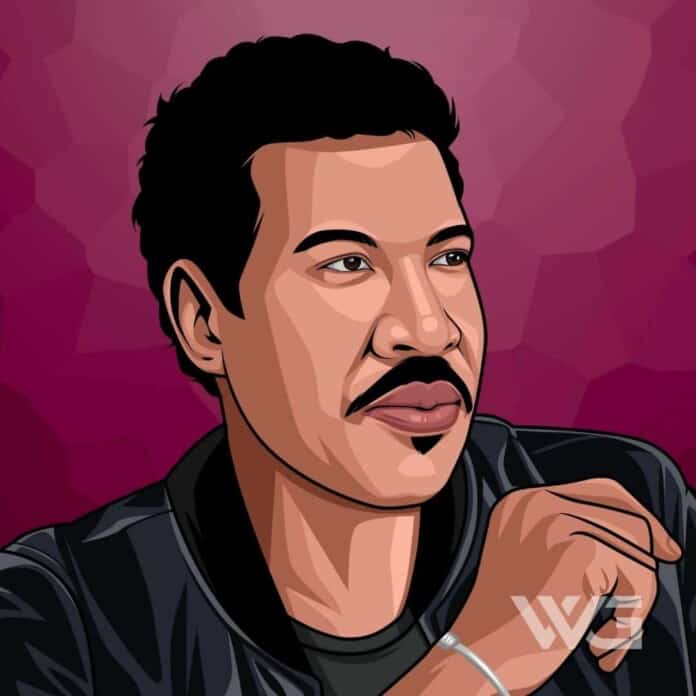 What is Lionel Richie’s net worth?

Lionel Richie is an American singer, songwriter, actor, and record producer from Alabama. Richie’s style of ballads with the Commodores and in his solo career launched him as one of the most successful balladeers of the 1980s.

He majored in Economics and graduated from the university. When he was a student with the university, he took interest in a number of upcoming R&B groups in the 1960s.

In 1968, he was signed on as a singer and saxophonist with the ‘Commodores’. The same year, he signed a record contract with Atlantic Records for one record and then moved on to Motown Records.

He sang the theme song for the film, ‘Endless Love’ along with Diana Ross in 1981. The song went on to become a huge hit in the UK, Brazil, Australia, New Zealand, and Japan. It is also considered one of Motown Records’ greatest hits.

He released his next solo venture, ‘Can’t Slow Down’ in 1983, under the label of Motown Records. The album sold twice as much as his first album and also went on to win a couple of Grammy Awards.

From 2002 to 2005, Richie’s song ‘Running with the Night’ was featured on the video game, ‘Grand Theft Auto: Vice City’. During this time, he was also seen in the British series, ‘Top Gear’ and on a ‘CMT Crossroads’ episode.

Here are some of the best highlights of Lionel Richie’s career:

“I think the whole world is dying to hear someone say, ‘I love you.’ I think that if I can leave the legacy of love and passion in the world, then I think I’ve done my job in a world that’s getting colder and colder by the day.” – Lionel Richie

“Exactly when people are in turmoil is the time that the entertainment business has always been at its best. Because people don’t want to be reminded every day that they are under siege, or that they’re not having a great time of life.” – Lionel Richie

“It’s quite interesting that in my growing up I had several influences. We had gospel music on campus. R&B music was, of course, the community, and the radio was country music. So I can kind of see where all the influences came from.” – Lionel Richie

“The best compliment that has ever been given to me was, I was at the airport one day and a guy came in and said, ‘Lionel, my wife loves you, the kids love you, my mother-in-law loves you, the family loves you.” – Lionel Richie

“I find the greatest songs in the world come out of pain, and I don’t like it! Here’s what it does: It strips away all of your facades. It makes you so honest. It’s cleansing.” – Lionel Richie

Now that you know all about Lionel Richie’s net worth, and how he achieved success; let’s take a look at some of the lessons we can learn from him:

1. Sometimes What You Want Is Right In Front Of You

The message of the song is simple – sometimes the thing you want is right in front of you – you just can’t see it yet.

You may be more familiar with the Faith No More cover of Lionel Richie’s Easy, especially if you’re a ‘90s kid, but either way, it’s a true masterpiece.

Written after a painful break-up, we think Richie is trying to tell us that, as long as you put everything into making something work, if it eventually breaks down, it’s okay. You can relax. You did everything you could. And that’s why you should be ‘easy like a Sunday morning’.

2. Just Go With The Flow

‘Don’t hold back, because it ain’t no use’ go the lyrics in Richie’s ‘80s hit Dancing On The Ceiling.

The rest of the song has the same theme to it – even if things get so surreal and crazy that people quite literally start turning upside-down and dancing on the ceiling, it’s totally fine, just go with it and you’ll probably have a great night.

How much is Lionel Richie worth?

Lionel Richie’s net worth is estimated to be $200 Million.

How old is Lionel Richie?

How tall is Lionel Richie?

Lionel Richie’s honeyed tones have festooned the radio frequencies of millions of soul and R&B music stations around the globe.

Richie is considered one of the most successful singer-songwriters of the 20th century, with most of his songs peaking on important music charts.

What do you think about Lionel Richie’s net worth? Leave a comment below.