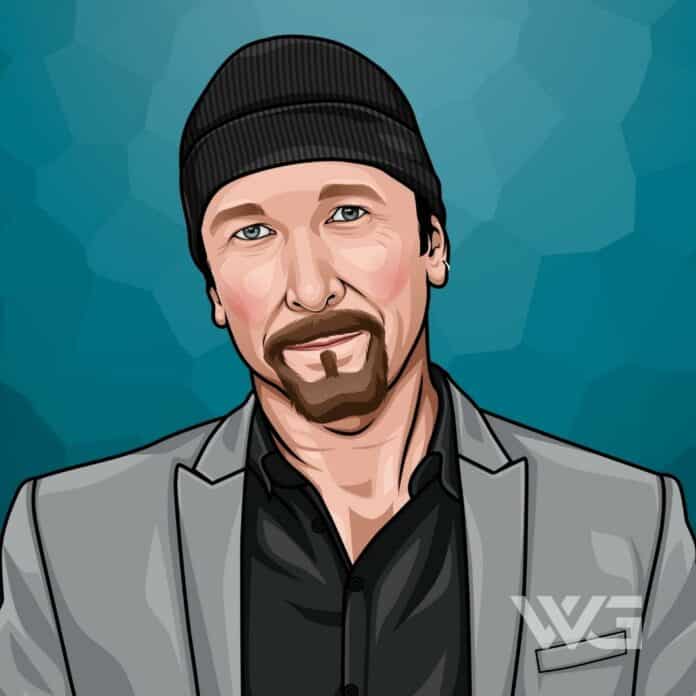 What is The Edge’s net worth?

The Edge’s part in U2’s fame led to him becoming one of the greatest guitarists of all time. He has created a signature sound that is both rhythmic and minimalistic.

Even though he is known for his guitar skills, he also has experience as a backing vocalist and is a skilled keyboard player.

The Edge has picked up 22 Grammy Awards as a member of U2, and he was also honored with induction into the Rock & Roll Hall of Fame.

His parents, Gwenda and Garvin Evans, produced two siblings, Dik and Jill, with Dik becoming one of the founding members of The Hype, which later became U2.

His family decided to move from England to Ireland in 1962 when his father was given a promotion. This caused a lot of confusion for young David as he ended up having two different accents and found it a bit difficult to settle into his new home.

He became friends with Adam, who would become a fellow member of the band. David attended Mount Temple Comprehensive School where he met the rest of the band members, Larry Mullen Jr (drummer), Adam Clayton (bass guitarist), and Bono (Lead vocalist and guitarist).

U2 started in the 70s, but remained fairly unknown until the early 80s, when they started to receive the recognition they deserved.

During the early stages of the Edge’s career with the band, he debated leaving, as the lifestyle of a rock star went against his religious beliefs. On deciding to stay, he wrote his first big hit, “Sunday Bloody Sunday”.

On releasing their debut album “Boy”, U2 started touring and playing at sell-out events,  becoming one of the most successful bands in the world.

However, even when U2 was getting major media attention, The Edge was exploring a more solo route, performing and contributing to high-end artists’ projects.

He performed and wrote songs for Tina Turner, Rihanna, and Johnny Cash, while closer to home, he also started to work on musical side-projects with Bono.

The band initially struggled to get off the ground, but once they all committed to making it work, U2 became one of the most popular bands of the eighties.

The band’s success saw the Edge’s income soar and he earned millions of dollars a year both from album sales and from their live tours.

Here’s an estimated overview of the Edge’s annual income:

U2 continues to produce record-breaking smash hits and with royalties from their earlier songs, each member of the band continues to receive an impressive amount of money.

The Edge also earns additional fees for writing the songs, which just adds to his already massive wealth.

The Edge’s Net Worth Annually

The Edge has invested heavily in property and his real estate holdings are truly astronomical.

However, his plans for developing some of his property have not come to fruition, although the costs have hardly dented his bank balance.

Here’s a breakdown of The Edge’s annual net worth:

The Edge’s wealth is set to rise even if he doesn’t play another song, as royalties from the band’s songs continue to flow in.

U2’s popularity is as strong now as it ever was and the Edge continues to reap the rewards of his hard work from decades ago.

The Edge married Aislinn O’Sullivan in 1983 and went on to have 3 daughters. The couple’s daughters’ names are Arun, Holli, and Blue Angel. Unfortunately, the couple separated in 1990 and finalized their divorce in 1996.

In 1993, he met a dancer, Morleigh Steinberg, and the couple had a daughter, Sian. They decided to get married in 2002.

The family bought a house in Killiney next door to his bandmate and friend Bono, for 10 million Euros.

From the early 90s, U2 and the Edge have enjoyed huge popularity across the world. Their concerts are sold out and their songs are rarely off the charts.

Here are some of the more memorable moments from The Edge’s career:

With plenty of life still left in the band, we’re sure that the Edge will continue to receive awards for the foreseeable future.

How Does The Edge Spend His Money?

The Edge purchased a plot in Malibu for $100 million, an event that made headlines at the time.

He and his family also purchased a 151-acre plot for $9 million in Sweetwater Mesa in 2005. The Edge came up with ideas to invest in a 5-mansion compound across the Californian mountains but faced legal battles before the project got off the ground.

The Edge spent $400,000 on geological studies to prove that there were no dangers in going ahead with the project. Unfortunately, he was unable to pursue his dream and spent a total of $10 million on legal fees, just to be turned away by the courts.

His investment in the musical, Spiderman: Turn Off the Dark. alongside his friend and one of the richest rockstars in the world, Bono, was a disaster due to onstage accidents, budget overruns, and terrible reviews. The show was eventually shut down and he made a colossal loss on the project.

Not only is The Edge an accomplished guitarist with a unique sound, but he is also a very experienced songwriter.

With his combination of guitar and songwriting skills, the Edge is considered one of the all-time great performers.

Here are some of the best highlights of The Edge’s career:

While the Edge has not been quite as prolific with his song writing in the last few years, we’re sure that he will continue to roll out new material that U2 fans will love.

The Edge sees his talent as something greater than himself and goes out of his way to use the money he’s earned to help worthy causes across the world.

He truly sees the world as his stage and tries to use his music to effect change across the globe.

Here are our favorite quotes from The Edge:

3 Amazing Lessons From The Edge

The edge has been through many difficulties in his career, but he always manages to bounce back.

However, he refuses to look back, preferring to focus on the future and all the possibilities that are, as yet, unexplored.

Now that you know all about The Edge’s net worth, here are some of the best success lessons to learn from The Edge:

1. Focus On Future Success, Not Past Mistakes

Focusing on previous mistakes and regrets will only hold you back. You can’t change the past, so why let it get in the way of your future?

The Edge never saw his life going the way it did, but once he found his passion, he knew what he was destined to become.

3. Curiosity Is Key To New Ideas

Curiosity doesn’t necessarily kill the cat, but also helps create new content and ideas. Sometimes it’s best to be curious, so you can pursue new ways.

The Edge is one of the greatest guitarists of all time and has made history with his unique sound. He has influenced musicians everywhere and will continue to do so as he tries out new ideas.

He has created his dream lifestyle and, even with his failures in certain investments, he continues to look forward to new projects.

There has been mention of new albums on the horizon and we are sure that the Edge will once again create some masterpieces that will break new ground in popular music.

What do you think about The Edge’s net worth? Leave a comment below.

Former world No. 1 tennis player Chris Evert has earned millions as one of the most talented players to ever step onto the court.