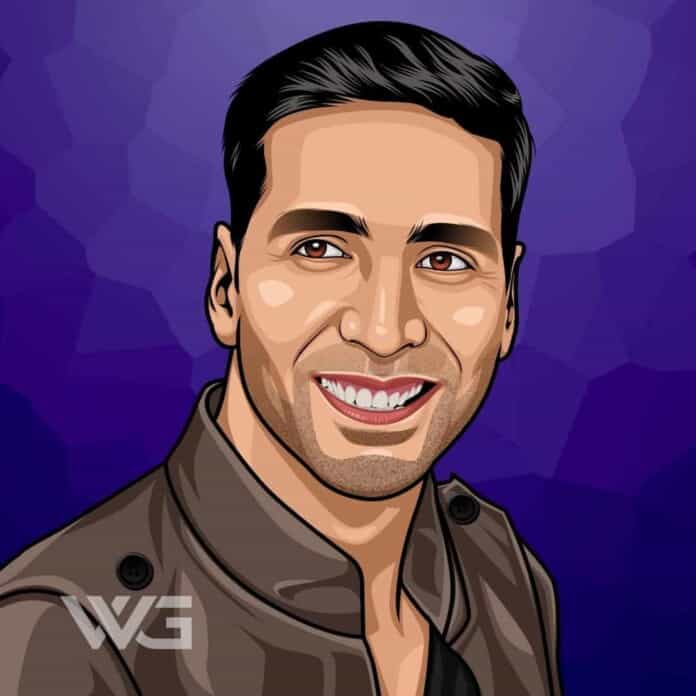 What is Akshay Kumar’s net worth?

Akshay Kumar is an Indian film actor, producer, and martial artist who has appeared in over 125 films over the course of his impressive career as a Bollywood actor.

After earning a reputation as “India’s Jackie Chan”, Kumar branched out with award-winning roles in drama films, as well as establishing himself as a comedy actor with impeccable timing.

Akshay Kumar was born on September 9th, 1967, in Amritsar, Punjab, in India to his father Hari Om Bhatia, who was an army officer, and mother Aruna Bhatia.

His family moved to Bombay, where Akshar took up karate and dropped out of college so he could pursue his interest in martial arts further, as well as develop his acting skills.

After working in various jobs, Kumar moved into the more lucrative modeling career that would set him on the path to becoming one of India’s leading actors.

By the early 1990s, Akshay Kumar had transitioned from modeling to working as an actor, appearing in the 1991 movie, Saugandh.

While several of his earlier films failed to perform well at the box office, his breakthrough role came with Khiladi, as well as hit comedies such as Hera Pheri which made him a household name.

In addition to working with some of the leading Bollywood actors, Kumar has worked with Western actors such as Clive Standen on the Bollywood movie, Namastey London.

He has also worked with some of the richest singers in the world, including alongside Kylie Minogue on the film Blue.

Noted for his versatile acting abilities, he’s capable of working on dramatic movies such as Dhadkan and Andaaz, as well as hit comedy movies like Hera Pheri and Bhool Bhulaiyaa.

With over a hundred movies to his name, as well as multiple appearances in some of India’s biggest television shows, Akshay Kumar has achieved impressive growth in his career earnings.

While Akshay Kumar has some way to go to compare to some of the richest people in India, his impressive net worth has continued to increase over the course of his career.

Here’s a breakdown of Akshay Kumar’s annual net worth:

Akshay Kumar married Twinkle Khanna on 17th January 2001, with whom he has a son and daughter who he keeps away from the media spotlight.

A keen fitness enthusiast, Kumar is known to practice kickboxing and parkour, as well as swimming and playing basketball on a regular basis.

While Kumar was initially a religious person, he’s since distanced himself from visiting shrines and temples, preferring to view himself as Indian above religious beliefs.

Akshay Kumar has appeared in multiple movies throughout his career, many of which have been nominated for some of the most prestigious awards in the film industry.

Here are some highlights from Akshay Kumar’s career:

How Does Akshay Kumar Spend His Money?

With a net worth of hundreds of millions of dollars and counting, Akshay Kumar has built a collection of impressive luxury goods

He’s the owner of some of the most expensive cars in the world, including a Rolls-Royce Phantom and Bentley Continental Flying Spur, alongside his collection of motorbikes.

In addition to his car and bike collection, Kumar owns over 350 pairs of shoes, including some of the most expensive sneakers ever made, as well as high-fashion smart leather shoes.

Akshay Kumar’s career features many notable hit movies and television appearances, with the Bollywood actor known for his prolific output across a broad range of genres.

Here are some of the best highlights of Akshay Kumar’s career:

Akshay Kumar has spoken on a broad range of subjects throughout his many media appearances, offering his insights into film production and the entertainment industry.

He’s also offered some perceptive insights into the nature of success and how he handles being in the public eye on a day-to-day basis.

Here are our favorite quotes from Akshay Kumar:

Now that you know all about Akshay Kumar’s net worth, let’s explore some of the lessons we can learn from his life and career.

Here are some of the best success lessons to learn from Akshay Kumar:

1. If You Wish To Acquire Wisdom, You Must Observe Those Around You

Akshay Kumar is a firm believer in the importance of observation when it comes to acquiring new skills and developing talent.

This is evident in his many martial arts accomplishments, as well as his ability to switch easily from one movie genre to another.

While Kumar has said he has drunk alcohol in the past, these days he’s a committed teetotaller who never drinks and says he’s much healthier for it.

3. Never Be Afraid To Embrace Your Feminine Side

A sound word of advice for any male fans of Kumar, embracing your feminine side opens up new emotional avenues to explore and helps you to develop a better personality.

That wraps up this guide to Akshay Kumar’s net worth, and how the Indian megastar has earned his impressive fortune.

One of the biggest stars working in the Bollywood industry, Kumar’s many movies have proven to be smash hits at the box office and helped make him a household name.

With his career showing no signs of slowing down, his net worth is likely to change, so be sure to check back on this article in the future for the latest information.

What do you think about Akshay Kumar’s net worth? Leave a comment below.

What is Hardwell's net worth? Introduction  Hardwell is a Dutch DJ,...