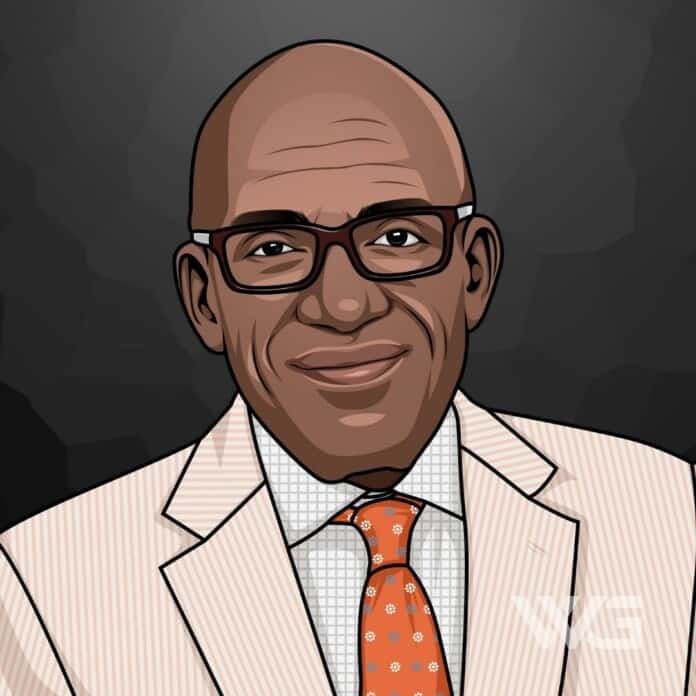 What is Al Roker’s net worth?

Al Roker is an American weather forecaster and journalist.

Roker is the current weather anchor on NBC’s Today. He also serves as a co-host on ‘3rd Hour Today’.

In 2014, he attempted to beat the unofficial world record for a live weather report of 33 hours held by Norweigan weather broadcaster Eli Kari Gjengedal.

As of November 2022, Al Roker’s net worth is estimated to be roughly $70 Million.

Roker is the son of Isabel and Albert Lincoln Roker Sr. Growing up, he wanted to become a cartoonist, and he was raised Catholic. He attended the State University of New York at Oswego.

Roker is related to the actress Roxie Roker, who starred in the sitcom ‘The Jeffersons’. Al Roker and musician Lenny Kravitz’s grandfathers were cousins.

Roker began working as a weather anchor in Syracuse, New York, from 1974 to 1976. During this time, he would also DJ at the campus radio station. He then moved to Washington D.C. and took a weather casting position at the station WTTG.

Since 1995, he has hosted NBC’s coverage of the Macy’s Thanksgiving Day Parade. Between the years 1996 to 1997, he hosted a game show on MSNBC titled ‘Remember This’.

The following year, he received the regular weekday weather slot. He was conducted more interviews and segments on the show over time.

Roker co-authored numerous murder mystery books beginning of 2009. The second book in the series, ‘The Midnight Show Murders,’ was nominated for a Nero Award in 2011. ‘The Morning Show Murders’ was published in 2010 and was made into a movie in 2018.

He has released a total of 12 books including ‘Never Goin’ Back: Winning the Weight Loss Battle For Good’ and ‘Al Roker’s Extreme Weather: Tornadoes, Typhoons, and Other Weather Phenomena’ and much more.

How Does Al Roker Spend His Money?

Al Roker is probably the most popular weather forecaster in the industry, and he has made a fortune throughout his career. He owns two beautiful homes, one in Manhattan and one in Hudson River Valley.

Al Roker and his wife are proud owners of a home in Manhattan. They also own a home in the Hudson River Valley. It comes with a huge garden, a modern kitchen and a private office.

Roker and his wife have a nice collection of cars, and one of the most notable purchase is a vintage Jaguar.

Here are some of the best highlights of Al Roker’s career:

“I have one of those Garmin watches, and I’m OCD about downloading my runs no matter where I go. I used it on an 18-mile run in Paris, a 12-miler in Montana’s mountains, a couple of runs in the Bahamas. Wherever I am, I try to run.” – Al Roker

“I think it’s a work in progress. I’m at an age now where it’s a little easier to do that than when I was younger and trying to build a career. If I have any regrets, I wasn’t home as much as I should have been or wanted to be. You can’t have it all, whether you’re a man or a woman. I don’t think it is possible – something’s got to give.” – Al Roker

“They do. What I find is, they basically vanish on you when you’re trying to reach them. When they want to reach you, they are all over you, and they want to know why you didn’t answer right away. My dad used to call home constantly and talk to us on his bus route. Each time he’d finish a run, he’d find a payphone and a couple of dimes, and make a call.” – Al Roker

“You just discover things about each other. I knew she wasn’t crazy about birds, but I realized, “Oh my God, you’ve almost got a full-blown phobia about this.” She’s also funnier than I realized. I’ve always known she had a sense of humor, but she’s got a perfect sense of humor.” – Al Roker

Now that you know all about Al Roker’s net worth, and how he achieved success; let’s take a look at some of the lessons we can learn from him:

There is no quick fix. You still have to do the work to maintain your weight. It can’t be a diet. You have to change your life.

3. Some Jokes Are Not Okay

People who would never think of dealing in racial or sexual stereotypes will still throw in a fat joke because it’s still OK. Really?

How much is Al Roker worth?

Al Roker’s net worth is estimated to be $70 Million.

How old is Al Roker?

How tall is Al Roker?

Al Roker is an American television weather forecaster known as the longtime weatherman on NBC’s ‘The Today Show’. Roker serves as the co-host on ‘3rd Hour Today’.

As of November 2022, Al Roker’s net worth is estimated to be roughly $70 Million.

What do you think about Al Roker’s net worth? Leave a comment below.