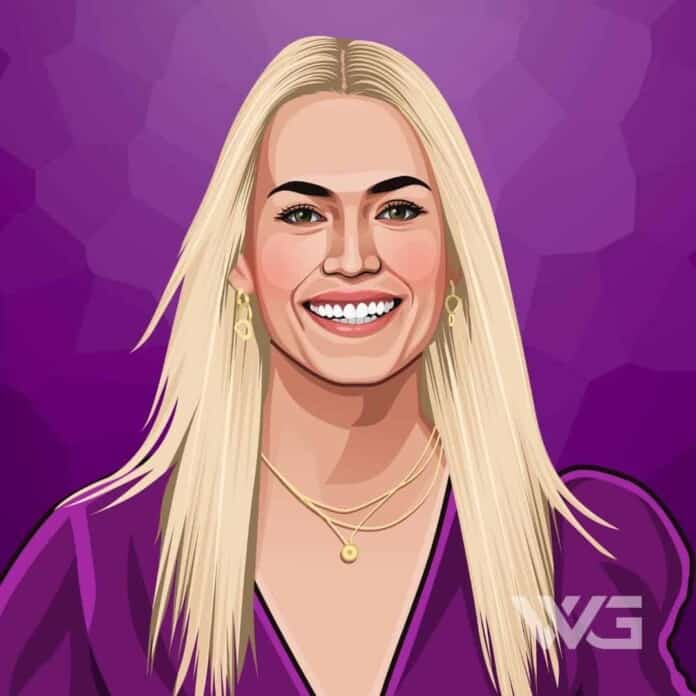 What is Amanda Hearst’s net worth?

As of February 2023, Amanda Hearst net worth is approximately $100 Million.

Amanda Hearst is an American socialite, activist, fashion model, and heiress to the Hearst Corporation.

She is an associate market editor at Marie Claire and the founder of Friends of Finn, an organization dedicated to stopping the inhumane treatment of dogs in puppy mills.

Hearst is the child of Anne Hearst, a niece of Patty Hearst, and a great-granddaughter of media mogul William Randolph Hearst. Her father, Richard McChesney, separated from her mother before Hearst’s birth.

Hearst attended the Chapin School in New York City and graduated from Choate Rosemary Hall, a boarding school. After a brief stint at Boston College, she dropped out to pursue modeling.

After Hearst dropped out from Boston College she was eventually persuaded to return to school, and she attended Fordham University, graduating in 2008 with a B.A. in art history.

As a former IMG model, Hearst has appeared on the covers of Town & Country, International Harper’s Bazaar, Cosmopolitan, and other major magazines, and has been featured in Vanity Fair.

She is an associate market editor at Marie Claire and the founder of Friends of Finn, an organization dedicated to stopping the inhumane treatment of dogs in puppy mills. She also served as a co-chair of Riverkeeper’s Junior Council.

Here are some of the best highlights of Amanda Hearst’s career:

“In 2009, designer Tina Tangalakis went on a volunteer trip to Ghana and instantly fell in love with the country and its people. It was from that trip that Della was born, a company that provides jobs, education, and skills training to women in Ghana.” – Amanda Hearst

“I always wear my heaviest pieces on the plane—sweater, boots, coat—so I save room in my suitcase. Also, when I travel, I stick to basic colors like black, navy or grey, and always pack a pair of black pumps because they can be worn with most evening outfits.” – Amanda Hearst

“I’ve always loved fashion and cared about protecting the environment. So when I realized that the two were interrelated, I became interested in the idea of sustainable fashion. I first wrote about the topic for Marie Claire about 10 years ago. When I met my now partner, Hassan Pierre, we came up with a “side project” to create a concept shop showcasing ethical fashion. From there, we did about 12 more pop-ups.” – Amanda Hearst

“Hassan and I started Maison de Mode with the goal of proving that sustainable and ethical fashion is luxurious and beautiful. So, all our products are, first and foremost, high-end in quality and aesthetic, luxurious, and unique.” – Amanda Hearst

Now that you know all about Amanda Hearst’s net worth, and how he achieved success; let’s take a look at some of the strongest lessons we can learn from her:

When you make it past day 1, week 1, month 1 and year 1 that is a big deal. So be proud as punch. You are doing amazing things and should beam with pride when you look at what you have done and when you share it with others.

2. You Know More Than You Credit Yourself For

You will absorb an incredible amount of knowledge during your startup journey. These questions were something you once struggled with. But now you hold the keys to the answers. You are now in a position to teach what you know.

3. You Have Achieved More Than You Credit Yourself For

Really, I can go on forever. Even if you are only in the early days of your startup, the achievements rack up fast. The skills you have developed will set you apart from the crowd.

How much is Amanda Hearst worth?

Amanda Hearst’s net worth is estimated to be $100 Million.

How old is Amanda Hearst?

How tall is Amanda Hearst?

Amanda Hearst is an amazing activist, model, and businesswoman.

Hearst is best known for being the associate market editor at Marie Claire and the founder of Friends of Finn, an organization dedicated to stopping the inhumane treatment of dogs in puppy mills.

As of February 2023, Amanda Hearst’s net worth is estimated to be roughly $100 Million.

What do you think about Amanda Hearst’s net worth? Leave a comment below.