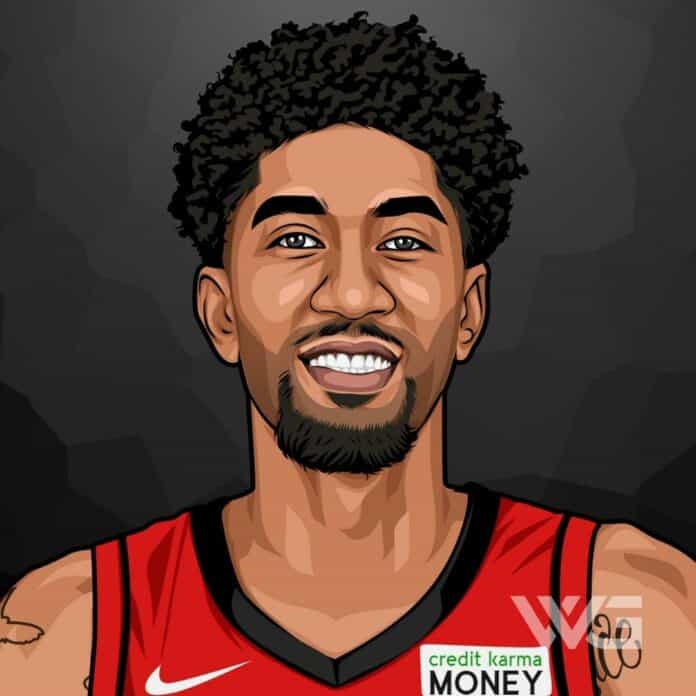 What is Christian Wood’s net worth?

Christian Marquise Wood is an American basketball player currently playing for the Dallas Mavericks in the NBA.

However, even before joining the NBA in 2015, Wood had made a name for himself in both high school and college basketball, thanks to his skills on the court.

Fortunately for his fans, he has no plans to retire anytime soon and is expected to remain in the NBA for many more seasons to come.

As of February 2023, Christian Wood’s net worth is estimated to be $5 Million.

Christian Marquise Wood was born September 27, 1995, in Long Beach, California, and he grew up developing a passion for basketball.

As a teenager, he attended Los Alamitos High School for his freshman year before transferring to Knight High School in Palmdale, California, for his second year.

He transferred once more to Findlay Prep in Henderson, Nevada, for his junior year, where he helped the school’s basketball team win 54 consecutive games and the ESPN National High School Invitational championship.

By his senior year, he was ranked as the No. 36 player overall in the class of 2013, and ESPN listed him as the No. 71 prospect for colleges.

Wood opted to enroll at the University of Nevada Las Vegas, where, as a freshman, he played 30 games and averaged 4.5 points per game.

He played 33 games during his sophomore season and was awarded All-Mountain West honors.

Following this season, he declared himself for the 2015 NBA draft, where he was initially projected to be chosen late in the first round.

After announcing himself for the draft in 2015, Christian Wood went undrafted but ultimately joined the Houston Rockets, where he played for the NBA Summer League.

In September 2015, he signed with the Philadelphia 76ers, where he officially made his debut by recording two rebounds in his first two minutes against the Boston Celtics.

He was later acquired by the Delaware 87ers, but his tenure didn’t last long, and he ultimately went back to the 76ers for the rest of the season.

Wood was signed by the Charlotte Hornets in 2016, and he made his debut against the Indiana Pacers, recording another two rebounds within three minutes.

In 2017, he returned to Delaware but played with the Dallas Mavericks and Phoenix Suns during the NBA Summer League.

He joined the Milwaukee Bucks in 2018 but was waved in 2019, which allowed him to join the New Orleans Pelicans, who he earned 7 points for in the first 8 minutes of his debut game.

However, the Pelicans ended up waving him by the end of the season, leaving him to join the Detroit Pistons for the 2019-20 season.

Wood was traded to the Houston Rockets in 2020, and he signed a three-year contract with them for $41 million.

In 2022, he was traded to the Dallas Mavericks and quickly proved himself to be a star player when he became the first player to score 25 points in each of his first two games with the team.

Although Christian Wood isn’t one of the richest NBA players in the world, he has earned a decent fortune during his career as a professional basketball player.

With every new season he plays, his salary has gradually increased, and he may very well become one of the highest-paid players if he doesn’t retire early.

Seeing how dramatically his earnings have increased, we expect it won’t be long until his net worth skyrockets, potentially making him one of the wealthiest players in the game.

He may not become as wealthy as Chris Bosh overnight, but he is certainly well on his way to making himself a substantial fortune.

Christian Wood was previously in a relationship with Maya Benberry, but the couple has since split after he went undrafted in 2015. He has not recently been linked to anyone else.

While he has an official Instagram account, he tends to keep quiet about his personal life and doesn’t post photos of his time off the court.

He also has his own official NBA page, where you can stay updated on his games, stats, and recent news.

Aside from this, little is known about what Wood does when he’s not playing basketball, though we will be sure to keep you informed if any information does become available.

Christian Wood may not be as decorated as Grant Hill or LeBron James, but he has earned a couple of awards and honors that bear mentioning.

As he continues his career, we expect to see him earn many more accolades and honors due to his dedication and skill.

Here are some of Christian Wood’s best career awards and achievements:

Despite not having earned as many honors and titles as Jimmy Butler, Christian Wood has done well for himself in a relatively short period of time.

It is expected that he will continue earning additional awards as he remains with the NBA as one of the league’s most talented players.

How Does Christian Wood Spend His Money?

We do know that since signing with the Dallas Mavericks, he has moved to Texas, though no information about his new home has been made public.

However, as his career continues and his fame grows, we expect to learn much more about how he spends his increasing wealth.

When new information does become available, we will be the first to let you know, so check back often to ensure you don’t miss any important updates!

Like Carmelo Anthony, Christian Wood has reached many milestones during his career that have made him one of the most popular players on the court.

However, some moments in his career stand out more than others due to their overall impact on his fame and fortune.

Here are some of the best highlights of Christian Wood’s career:

While playing for some of the richest NBA teams, Christian Wood has enjoyed many memorable moments during his career that have helped him stand out from other players.

Although he hasn’t achieved as many milestones as Dikembe Mutombo, he is well on his way to becoming one of the greatest players in NBA history so long as he continues performing as well as he has.

There is a lot that we can learn from Christian Wood and his impressive career in the NBA as a professional basketball player.

Now that you know all about Christian Wood’s net worth, we can take a closer look at what he can teach us about reaching our own goals.

Here are some of the best success lessons to learn from Christian Wood:

If you want to become successful, you have to become comfortable taking risks in order to find new and important opportunities.

While you shouldn’t take unnecessary gambles, taking advantage of calculated risks can pay off big when you’re trying to reach particularly lofty goals.

You should always be on the lookout for new opportunities if you want to make progress on your goals.

Don’t just aim for possibilities that are obvious, but keep your eyes open for unique prospects that you might otherwise have missed or not considered, as they can open many unexpected doors!

3. Push Yourself To Be Better

No matter how good you are at something, you should always push yourself to become better.

Nothing good comes from stagnation, so you should be consistently working on yourself and your skills to make sure you stay on top of your game.

Christian Wood has made a small fortune during his time with the NBA, and his net worth is only continuing to grow larger with each passing season.

While he has been playing since 2015, Wood has no plans on retiring from the court anytime soon, so we can expect to see a lot more of him in the future.

Make sure to check back often so that you don’t miss any important updates on Christian Wood’s career and increasing fortune!

As of February 2023, Christian Wood’s net worth is estimated to be $5 Million.

What do you think about Christian Wood’s net worth? Leave a comment below.