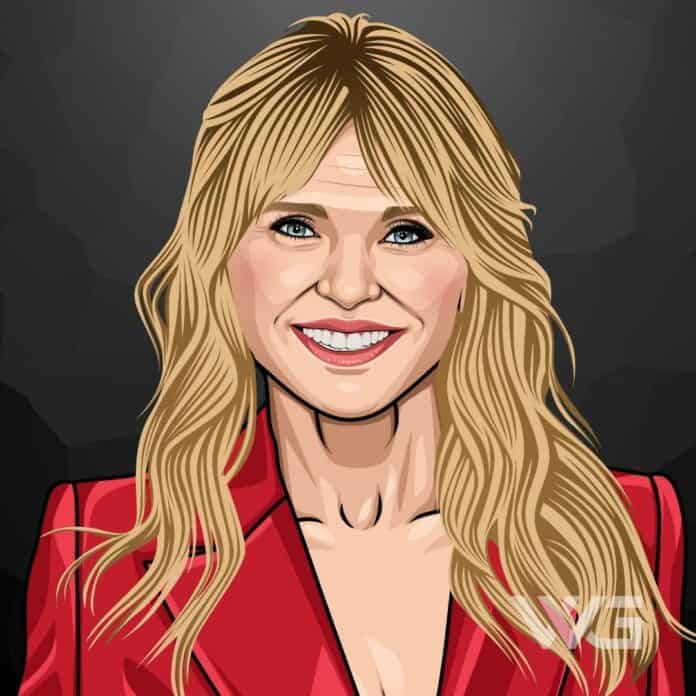 What is Christie Brinkley’s net worth?

Christie Brinkley is one of the richest models in the world, and she’s earned her fortune throughout her long career in the spotlight.

Now a successful businesswoman, Brinkley is continuing to grow her wealth through the ownership of numerous brands.

As of February 2023, Christie Brinkley’s net worth is estimated to be $100 Million.

When she was young, her family moved to Canoga Park, Los Angeles, California, where her mother met and later married Donald Brinkley, a television writer from Bel Air.

Donald Brinkley adopted Christie and her brother Greg, and the family lived in Malibu for a short while before moving to the Brentwood neighborhood.

Christie attended Paul Revere Junior High School and the Le Lycee Francais de Los Angeles from 9th to 12th grade, after which she moved to Paris, France, to study art.

While living in Paris, Brinkley was discovered by American photographer Errol Sawyer, who introduced her to John Casablancas at Elite Model Management.

Shortly after being introduced to Casablancas, Brinkley met with Eileen Ford affiliate Nina Blanchard in Los Angeles, where she was immediately booked for three national ad campaigns.

Brinkley made numerous appearances on the cover of Glamour magazine and was quickly booked for a 25-year contract with CoverGirl, a major cosmetic brand.

However, Brinkley’s fame grew immensely after she appeared on her first Sports Illustrated Swimsuit issue in 1979, which was followed by two more appearances on the cover in 1980 and 1981.

As an editorial model, Brinkley has appeared on over 500 magazine covers, including Esquire, Cosmopolitan, Harper’s Bazaar, Vogue, Newsweek, Rolling Stone, and US.

She has also held several contracts with brands, including Diet Coke, Anheuser-Busch, Yardley of London, MasterCard, Chanel No. 19, and Healthy Choice.

Brinkley made her acting debut in 1983 on National Lampoon’s Vacation and has since had several television appearances on The Goldbergs, Mad About You, and Parks and Recreation.

Although we don’t know precisely how much Christie Brinkley has earned throughout her career, we do know about her business ventures that have undoubtedly contributed to her wealth.

With so many sources of income, it really isn’t any surprise that Christie Brinkley has become one of the richest models in the world, falling just short of the fortune accumulated by Heidi Klum, whose net worth is $160 million.

Christie Brinkley has been married numerous times. The first was in 1973 to French artist Jean-Francois Allauz, which ended in 1981.

In 1985, Brinkley married Billy Joel on a Husdon River yacht, and the marriage ended in 1994 after the birth of their child, Alexa Ray Joel, in 1985.

Brinkley married once again in 1994 to real estate developer Richard Taubman, and when their son, Jack Paris Brinkley, was born in 1995, the same year, the couple ultimately divorced.

In 1996, Brinkley got married for the fourth time to Peter Halsey Cook, and together they had one daughter, Sailor Lee Brinkley Cook, who was born in 1998.

While Brinkley and Cook divorced in 2008, Brinkley was later linked to John Mellencamp in 2015, though they broke up after a year of dating.

Christie Brinkley has been honored many times throughout her modeling career.

While she has plenty of awards under her belt, some are much more significant than others.

Here are some important awards and achievements from Christie Brinkley’s career:

Although these are just a few of the many awards Christie Brinkley has won, these awards highlight just how significant her career has been.

How Does Christie Brinkley Spend Her Money?

Christie Brinkley spends a lot of money on real estate, surprisingly, and some of her homes are extremely lavish.

Her current home is listed as Tower Hill, a 20-acre mansion estate that was originally built in 1891.

It has also been reported that Brinkley owns another five-bedroom estate spanning four acres in the Hamptons that comes with a private pool and terrace that overlooks the bay.

Christie Brinkley has achieved a lot of success throughout her career, but some of her milestones have been more significant than others.

While all of her achievements are important, some stand out for having the biggest impact on her career.

Here are some of the best highlights of Christie Brinkley’s career:

Despite reaching many milestones throughout her career, these are the most significant that have allowed Brinkley to grow her wealth and fame.

Christie Brinkley is more than just a pretty face, and this becomes evident if you listen to or read any of her interviews.

While she has been known to say many inspiring things throughout her career, some have stood out to fans more than others.

Here are our favorite quotes from Christie Brinkley:

There are a lot of great lessons we can learn from Christie Brinkley’s career.

Now that you know all about Christie Brinkley’s net worth, we can take a closer look at what she can teach us about reaching our own goals.

Here are some of the best success lessons to learn from Christie Brinkley:

If you want something done, don’t just talk about it, make plans to get it done.

Procrastination is the worst thing you can do if you’re trying to become successful, and it is a habit that is best stamped out as soon as possible.

If you’re doing the same thing every day, it can become tedious and boring very quickly. That is why adding some variety can be essential.

Whether it’s something as simple as a coffee break or a complete overhaul of how you do things, adding something new to your day and definitely helps prevent burnout.

3. Take The Good With The Bad

There will always be low points when you’re chasing your dreams, but it’s essential to try and find the silver lining no matter what.

Although it can take practice to cultivate a positive outlook, it is extremely valuable for anyone looking to get ahead.

Christie Brinkley has earned millions as one of the highest-paid models in the industry, and she is still going strong today.

While she may not be gracing the cover of Sports Illustrated anymore, her business ventures ensure that her net worth continues to grow.

Be sure to check back to stay up-to-date on Christie Brinkley’s fortune as it increases further.

As of February 2023, Christie Brinkley’s net worth is estimated to be $100 Million.

What do you think about Christie Brinkley’s net worth? Leave a comment below.

The first Swiss competitor to win a major title, Martina Hingis, has earned millions as one of the most talented tennis players in the world.