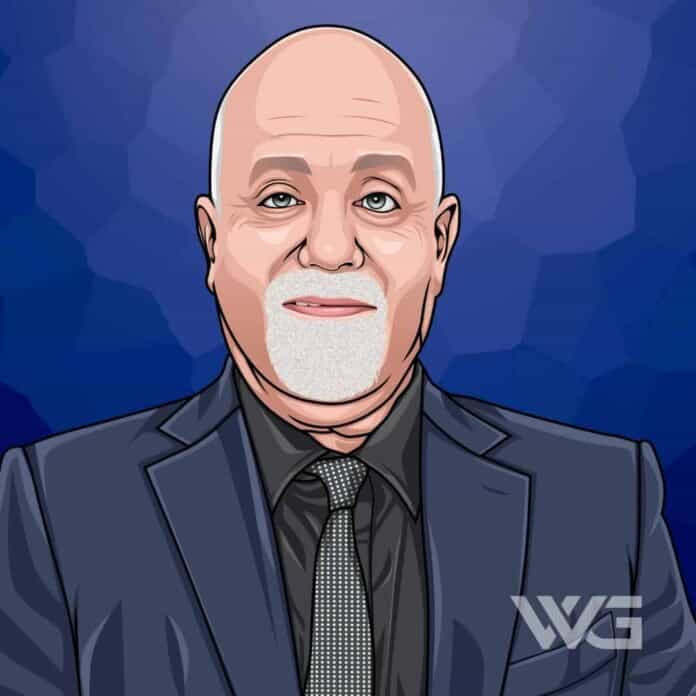 What is Billy Joel’s net worth?

Billy Joel is an American singer-songwriter and one of the best-selling artists of all time, with over 150 million record sales throughout his career.

With multi-platinum selling albums such as 52nd Street combined with 33 top 40 hits in America, he’s picked up no less than 23 Grammy Awards nominations.

William Martin Joel was born in the Bronx, New York City, on May 9th, 1949, growing up with his sister Judy.

His father was trained in music as a classical pianist who fled Germany during the war, traveling through Switzerland and Cuba before arriving in the United States.

Billy Joel began taking piano lessons at the age of four, joining his first band, The Echoes, when he was fourteen years old.

After leaving The Echoes to join the band the Hassles, Billy Joel formed a new band with drummer Jon Small called Attila.

Additional albums followed, with his fourth solo album, The Stranger, selling over 10 million copies and marking his breakthrough into the mainstream.

Over the following years, Joel released many albums, with his Greatest Hits compilation becoming one of the best-selling albums of all time, selling over 11 million copies worldwide.

He’s worked with some of the biggest names in the music industry, touring with Elton John on a regular basis.

He’s also appeared at concerts with Steven Tyler, Paul McCartney, and Garth Brooks, as well as selling out solo tours around the world.

Throughout his career, Billy Joel has earned a considerable amount of money through the sales of his singles and albums.

His live shows also generate large sums of money, with his multi-year Madison Square Garden residencies earning between $2-3 million for each show.

As one of the richest rockstars in the world, Billy Joel’s net worth has continued to increase thanks to ongoing royalties from his record sales.

Despite the fact he took a step back from recording in the early 1990s, royalties combined with fees for his live performances have contributed to his increased net worth.

Billy Joel has been married several times over the course of his life, with his relationship with Elizabeth Weber Small beginning while she was still married to Jon Small, his partner in the band Attila.

In 1985 he married model Christie Brinkley, with whom he has a daughter, Alexa Ray Joel, and the couple divorced in 1994.

He married his third wife, chef Katie Lee, in 2004, and following the dissolution of their marriage, he wedded equestrian Alexis Roderick in 2015.

With his prolific musical output, including many hit singles and albums, Billy Joel is among the most celebrated musicians of his generation.

Here are some highlights from Billy Joel’s career:

How Does Billy Joel Spend His Money?

Billy Joel has used some of his impressive net worth to invest in real estate and owns several expensive properties around America.

This includes a $22 million home in Oyster Bay, as well as a townhouse in New York, and a home in the Long Island town of Sag Harbor.

He’s also a keen motorbike collector, owning some of the most expensive motorbikes in the world, which he displays in a public museum.

Billy Joel has enjoyed a successful career over the course of several decades, collaborating with some of the most significant figures in the entertainment industry.

Here are some of the best highlights of Billy Joel’s career:

Billy Joel has accumulated a great deal of experience throughout his years as a best-selling musician, offering plenty of insights into the business and his creative process.

Here are our favorite quotes from Billy Joel:

Now that you know all about Billy Joel’s net worth, let’s take a closer look at some of the lessons we can learn from his prolific career in the music industry.

Here are some of the best success lessons to learn from Billy Joel:

1. Take The Time To Slow Down And Appreciate What You Have

When life starts to feel as if it is overwhelming you, take the time to reflect on what matters the most and recharge your batteries.

As Joel says in his song, Vienna, “You’ve got so much to do, and only so many hours in a day” so take the time to “slow down”.

2. If The Chance Arises, Learn From The Master

With his father a classically trained concert pianist, Billy Joel had a unique opportunity to learn from a pro and took the chance with both hands.

3. Be Willing To Help Others

Billy Joel has been in a unique position to charge exceptionally high fees for speaking engagements and concerts but is happy to share his wisdom for free.

His advice on launching a career in the music industry has helped many musicians begin their professional journey and get started on the right foot.

That wraps up this guide to Billy Joel’s net worth, covering his prolific career and the best-selling records that helped him achieve his impressive fortune.

With dozens of prestigious awards and accolades to his name, Billy Joel has helped shape American music over several decades.

We’ll update this article in the future to make sure it reflects his current net worth, so be sure to check back for the details.

What do you think about Billy Joel’s net worth? Leave a comment below.