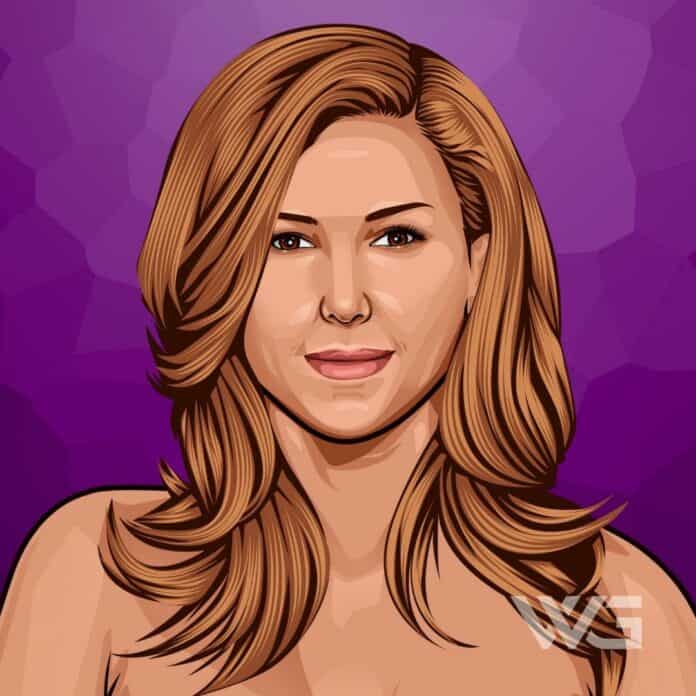 What is Daisy Fuentes’ net worth?

Daisy Fuentes is a Cuban-American model, actress, and TV personality who got her start as a weather anchor on the Telemundo network’s WNJU-TV 47.

Fuentes has since gone on to accumulate a massive net worth as a talented model, actress, and advocate for the Latino community.

As of February 2023, Daisy Fuentes’ net worth is estimated to be $75 Million.

Daisy Fuentes was born November 17, 1966, in Havana, Cuba, to a Cuban father and a Spanish mother.

When she was three, in 1969, her family fled Cuba to escape the regime of Fidel Castro, moving to Madrid, Spain.

Four years later, her family moved to Harrison, New Jersey, where she would attend Harrison High School and be elected Homecoming Queen.

After graduating in 1984, Fuentes enrolled at a cosmetology school with the goal of opening her own salon one day.

Later, she would enroll at Bergen Community College, majoring in communications.

While still attending college, Daisy Fuentes was hired as a weather anchor for WNJU-TV 47, a local Spanish-language network affiliated with Telemundo.

After a short stint there, she moved to New York’s Univision affiliate WXTV-TV 41, where she presented the weather and evening news.

In 1988, Fuentes started hosting MTV Internacional, a Spanish music show that aired in Latin America on the Telemundo Network, alongside her news anchor career.

Fuentes was then able to secure a job as a video jockey on MTV, becoming the first Latina on the United States channel.

During her time with MTV, Fuentes also hosted a modeling and fashion series called House of Style, later landing a role on the ABC soap opera Loving.

From 1994 to 1995, Fuentes hosted her own talk show, Daisy, on CNBC, and she co-hosted America’s Funniest Home Videos, with John Fugelsang, from 1998 to 1999, making her the only female host to appear on the show.

As a model, Fuentes has appeared on many magazine covers and appeared in ads for companies including Pantene, American Express, and Revlon, becoming the first Latina spokesperson for the makeup brand.

In 2004, she successfully launched her own clothing brand, securing a deal with Kohl’s that ended up selling approximately $300 million in goods per year.

Fuentes also served as a co-presenter on La Voz Kids in 2015, a Spanish version of The Voice for kids on Telemundo.

Although Daisy Fuentes hasn’t made her annual salary public, we can easily assume she makes millions.

While we can’t provide figures, we can give you some information about how she continues to maintain her wealth.

While she falls just shy of being considered one of the richest models in the world, Daisy Fuentes has done very well for herself, and her business sense is something that cannot be denied.

Fuentes considers Harrison, New Jersey, to be her home, even though her parents have since moved to live in Miami, along with her younger sister, Rosana.

From 1991 to 1995, Fuentes was married to actor and model Timothy Adams, later dating Luis Miguel for three years before breaking up.

Fuentes became engaged to singer Matt Goss in 2003, but the pair broke up in 2010 without marrying.

In 2015, Fuentes married singer and producer Richard Marx, and the couple is reported to live in Malibu without any children.

Daisy Fuentes may not have earned as many accolades as fellow model Heidi Klum, but that doesn’t mean she hasn’t earned her fair share of important distinctions.

While all of her achievements have been impressive, some are more noteworthy overall.

Here are some of the best accomplishments of Daisy Fuentes’ career:

Fuentes has certainly enjoyed incredible success during her time in the entertainment industry and set herself apart with several remarkable honors.

How Does Daisy Fuentes Spend Her Money?

In 2013, Daisy Fuentes spent $5.75 million on a home in Malibu with spectacular ocean views.

Fuentes put this home up for rent in 2016 for $24k per month, so if you’re wealthy and want a beachfront vacation, you can pop on over to her former home.

Along with that home, Daisy also owns another mansion away from the waterfront in Malibu, which she purchased in 2015 for $5 million.

Throughout Daisy Fuentes’ career, numerous opportunities have given her the chance to distinguish herself.

While she has hit many important milestones since jumping into the spotlight, some moments from her career stand out the most.

Here are some of the best highlights of Daisy Fuentes’ career:

Daisy Fuentes has done many things that most models could only dream of doing, and these specific highlights are what have helped make it all possible.

Daisy Fuentes has made a career breaking barriers and overcoming obstacles.

Due to her experiences, Fuentes is filled with great advice and relatable anecdotes that allow her to connect with almost anyone.

Here are our favorite quotes from Daisy Fuentes:

There is a lot we can learn from Daisy Fuentes and her long career in the entertainment industry.

Now that you know all about Daisy Fuentes’ net worth, we can take a closer look at what she can teach us about reaching success in our own lives.

Here are some of the best success lessons to learn from Daisy Fuentes:

1. Don’t Give Up On Your Passions

Nothing kills motivation, like giving up on your passions, and you should do everything in your power to stay invested in them.

While it isn’t always easy, ultimately, it will be the most rewarding in the long term.

If you stop learning and bettering yourself, there will always be someone else to take your place.

Skills can stagnate, and knowledge can be outdated, but if you stay on top of your game, you’ll never risk being passed over for someone else.

You’ll have a hard time becoming successful if you don’t have the right connections, so it is vital to talk to as many people as possible and put yourself out there.

While it is sometimes possible to achieve your goals by yourself, it certainly helps to have a strong network of connections.

While she isn’t as active as she used to be, Fuentes continues to grow her fortune with various business ventures that earn her millions every year.

Make sure to check back often so you don’t miss any updates on Daisy Fuentes’ net worth!

As of February 2023, Daisy Fuentes’ net worth is estimated to be $75 Million.

What do you think about Daisy Fuentes’ net worth? Leave a comment below.