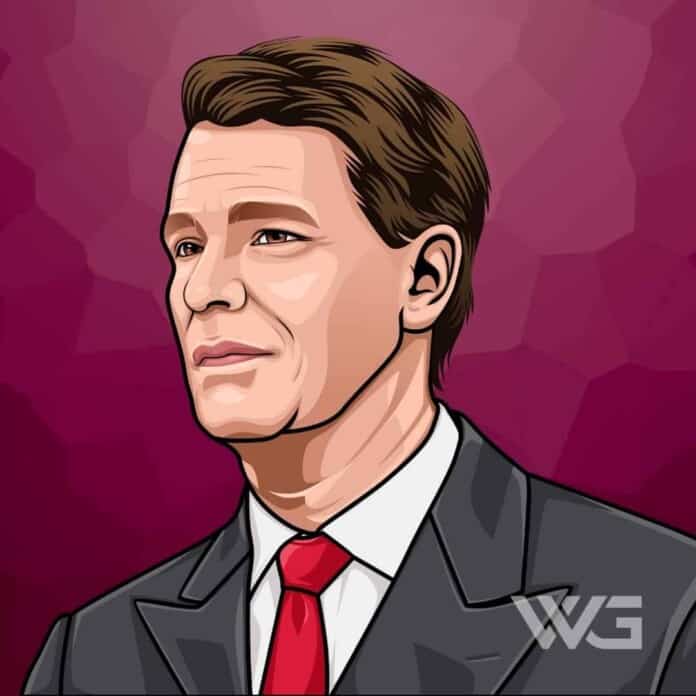 What is John Layfield’s net worth?

Layfield got his start in World Wrestling Entertainment when it was called the World Wrestling Federation, and he’s enjoyed an incredibly successful career spanning 17 years.

Under the name Bradshaw, Layfield left a lasting mark on WWE history, and the success he has earned from it is something that has only helped boost his net worth higher and higher.

As of February 2023, John Layfield’s net worth is estimated to be $9 Million.

John Charles Layfield was born in Sweetwater, Texas, in 1966.

At Trinity Valley Community College, Layfield worked as a collegiate football coach before he started playing for Abilene Christian University.

At Abilene, Layfield was a starter on the offensive line and was eventually signed to the Los Angeles Raiders, though he was released before the 1990 season started.

While he did go on to play in the World League of American Football, starting all ten games during the 1991 season for the San Antonio Riders, he was eventually drawn into wrestling, getting his training from Brad Rheingans and Black Bart.

John Layfield debuted in 1992 at the Global Wrestling Federation with the gimmick “John Hawk” and formed a tag team with Bobby Duncum Jr., earning them the GWF tag team Championship title.

In 1995, he debuted as John Hawk in the WWF, and his first television appearance happened on a 1996 episode of WWF SuperStars, where he was called Justin “Hawk” Bradshaw.

In 2002 at Raw, Layfield, now going by “Bradshaw,” teamed up with Stone Cold Steve Austin since the two were native Texans.

During an episode of SmackDown! in 2003, Bradshaw teamed up with Faarooq to save The Undertaker, and later in the same year, they reunited once again to defeat Brock Lesnar and Big Show.

At WrestleMania 21, Layfield lost his title officially to John Cena, and later in the same year, Dave Batista defeated him at SummerSlam in a no holds barred match.

After losing to Rey Mysterio and struggling with a back injury, Layfield left SmackDown! to become a color commentator for the series.

Despite being a commentator, Layfield was known to become physical, attacking Batista and The Undertaker at a Cyber Sunday match, and again in 2007, he kicked Chris Jericho in the head after the wrestler pushed him out of the way during a match.

That altercation led Jericho, now one of the richest wrestlers in the world, to issue a challenge that brought Layfield back into the ring for another match. However, Jericho was disqualified for hitting Layfield with a metal chair.

In their rematch, Jericho won, and during his next match, a fatal four-way elimination, Layfield was the first one eliminated by John Cena, which reignited their feud.

Layfield continued wrestling through 2009 when he retired once again after losing the Intercontinental title at WrestleMania 25 against Rey Mysterio.

He returned to his position as a commentator until 2017 when he announced he was stepping down from SmackDown Live.

While he still makes appearances in the WWE, he is much more focused on his business career now, having founded Layfield Energy and working as a financial analyst on Fox News.

John Layfield has a yearly salary of approximately $530,000, which he gains through his business ventures and financial analyst services.

Along with his company, Layfield Energy, he is the co-founder of a rugby expansion team in New York City, along with James Kennedy, in addition to being a global ambassador of Beyond Sport, an organization that uses sports to address social issues in communities worldwide.

Layfield also benefits from frequent appearances on Fox Business Network and the Fox News Channel as a business commentator.

To maintain his impressive net worth and salary, John Layfield consistently works and finds new ways to grow his wealth.

John Layfield was previously married to Cindy Womack in 1994, but the couple divorced in 2003.

Now married to Meredith Whitney, the couple enjoys a lavish lifestyle which he documents on his personal Instagram along with his current business ventures.

John Layfield has enjoyed one of the industry’s longest and most successful wrestling careers, and he has won many titles and championships along the way.

We’ve chosen some of his most significant milestones that stand out from the rest.

Here are some highlights from John Layfield’s career:

How Does John Layfield Spend His Money?

Since retiring from the ring, John Layfield has lived in Bermuda, and while we don’t know much about his home, we do know that he has his own TV studio in his basement, which he uses for many of his on-air appearances.

This TV studio was funded by the Bermuda Department of Tourism, with the catch that Layfield must use colorful backdrops of the country while broadcasting.

While he may not have had to shell out the cash for his studio, we wouldn’t be surprised if he has a stash of the most expensive cigars in the world ready and waiting after each successful broadcast.

John Layfield has reached many milestones in his career, but some are more significant than others.

Here are some of the best highlights of John Layfield’s career:

Having spent so much time in the spotlight, Layfield has said a lot of notable things.

Even after leaving the ring, he has made a name for himself for speaking up on a number of significant topics.

Here are our favorite quotes from John Layfield:

Now that you know all about John Layfield’s net worth, we can take a look at the lessons we can all learn from his impressive career and life.

Here are some of the best success lessons to learn from John Layfield:

Layfield knew when he was a kid that he wanted to become a wrestler, and while he started getting into football in college, it was wrestling that he ultimately ended up successfully pursuing.

Although not every childhood dream may seem realistic, you’ll never know until you try, so you might as well hold onto that goal and keep it in mind while you’re climbing the ladder of success.

Wrestling isn’t an easy sport, and neither is building your own business.

There are going to be a lot of long nights while you’re working your way to the top, but once you’ve reached your goal, take time to celebrate before choosing another milestone and starting the hustle all over again.

3. Don’t Shy Away From Conflict

Although the conflicts portrayed in wrestling are largely for the crowd’s amusement, it’s important to remember that in life, you won’t always end up being everyone’s friend.

You’re going to butt heads with people along the way, but so long as you don’t purposely seek out conflict, you should simply take it in stride and focus on achieving your own goals.

John Layfield has enjoyed an impressive career that has earned him a huge net worth and the admiration of thousands of fans.

While he may not be in the ring anymore, he still benefits from successful business ventures and from appearances in WWE merchandise and video games.

As of February 2023, John Layfield’s net worth is estimated to be $9 Million.

What do you think about John Layfield’s net worth? Leave a comment below.