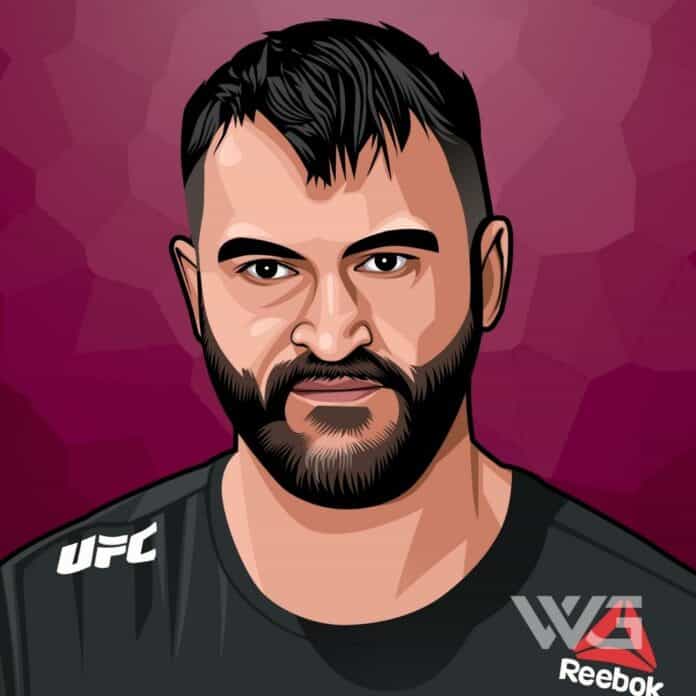 What is Andrei Arlovski’s net worth?

Andrei Arlovski is a Belarusian-American mixed martial artist who is a former UFC Heavyweight Champion.

Outside of the Ultimate Fighting Championship, Arlovski has fought for several other promotions including Strikeforce, World Series of Fighting, and EliteXC.

As of February 2023, Andrei Arlovski’s net worth is estimated to be $6 Million.

Andrei Arlovski was born 4 February 1979 in Babruysk, Belarus when the country was part of the Soviet Union.

He had taken a liking to martial arts and wanted to join the police academy as a teenager, and trained in Sambo while he started lifting weights to practice for a potential law enforcement. career.

Arlovski’s skills got him to the World Sambo Championship where he would end up taking second place, and was also the runner-up at the Sambo World Cup.

Andrei Arlovski would then win the next three fights of his career, including a win over Roman Zentsov, earning himself a spot to fight for Dana White at Ultimate Fighting Championship.

Arlovski won his UFC debut against Aaron Brink, but would drop his next two matches before going on a long winning streak.

During that streak, Arlovski would win the UFC Heavyweight Championship and successfully defended his title against Justin Eilers and Paul Buentello before dropping both of his title matches against Tim Sylvia.

Since then, Arlovski has had a long career of ups and downs that include both winning streaks and losing streaks with wins over Chase Sherman and Frank Mir highlighting his time with UFC.

While he’s not among the highest-paid UFC fighters, Andrei Arlovski has had a very consistent career where he’s earned a minimum of six figures.

Arlovski is a staple of the heavyweight division in the UFC, and his record number of wins has earned him a lot of money.

Arlovski is now in his 40s so it’s hard to tell how long his UFC career will last, but he’s still earning a great salary each year.

There are still some opponents that Arlovski wants to take on, and those potential matches would earn him quite a bit more money.

Andrei Arlovski has earned millions throughout his career, and has had a solid net worth for more than a decade.

Arlovski has earned big paydays in the heavyweight division from his fights against Stipe Miocic, Frank Mir, and many others to build his net worth.

Here’s a breakdown of Andrei Arlovski’s annual net worth:

Arlovski’s longevity as a mixed martial artist has made him among the richest in the sport, and he wants to continue fighting for as long as possible.

He has said that money is a big part of why he has continued to fight well into his 40s, and it’s hard to blame him after seeing his net worth.

Andrei Arlovski had previously been in a relationship with model Patrycja Mikula, but is currently married to Ludmila Arlovski, and the couple has a son named Andrei Jr.

Arlovski has the nickname Pit Bull since he has a love for the breed of dogs, and has one himself named Maximus that has appeared with him in a public service announcement to prevent animal cruelty.

In addition to his fighting career, Arlovski has been in several movies and television shows including Bully Beatdown, Universal Soldier, and The Equalizer 2.

Whether it be in traditional martial arts or mixed martial arts, Andrei Arlovski has compiled a long list of awards in his career.

Arlovski’s resume includes championships at the UFC level, as well as titles he won in Sambo during his teenage years.

Here are some the top awards from Andrei Arlovski’s career in fighting:

Andrei Arlovski might not be the most decorated UFC fighter of all time in terms of championships, but he does have a lot of records.

His longevity has lent to a lot of his prestige as a mixed martial artist, fighting with several promotions including Strikeforce on top of his time with the UFC.

How Does Andrei Arlovski Spend His Money?

Andrei Arlovski is one of the richest MMA fighters in the world, giving him plenty of money to spend on whatever he wants.

He does, however, like to indulge in a big of gambling and has said that he won a solid amount of money betting on Ronda Rousey to lose to Holly Holm.

Otherwise, Arlovski isn’t too much of a big spender, instead focusing more of his time training as a mixed martial artist.

Dating back to being in the Sambo World Cup to starring in Universal Soldier alongside Dolph Lundgren and The Equalizer 2 with Denzel Washington, there have been a lot of memorable moments for Andrei Arlovski.

His resume is very diversified throughout his fighting career, especially as a mixed martial artist across multiple promotions.

Here are some of the best highlights of Andrei Arlovski’s career:

Andrei Arlovski is one of the most fascinating men in MMA, and is an international master of sport in Sambo on top of his fighting career.

He’ll continue to add onto his resume until he’s finished with fighting, but says that he wants to contend until he’s a champion once again.

Andrei Arlovski was born in the Soviet Union, so English wasn’t his first language, but people still love to hear what he has to say.

When Joe Rogan gives him a microphone, Arlovski has had some memorable quotes about his time in the UFC.

Here are our favorite quotes from Andrei Arlovski:

Andrei Arlovski started lifting weights and practicing as a mixed martial artist in his teenage years, wanting to go to police academy.

Instead, he found a career as a professional fighter and has learned a lot along the way between the octagon and life outside of it.

Now, he’s considered among the likes of Junior Dos Santos, Brock Lesnar and Cain Velasquez as the most notable heavyweights in UFC history.

Now that you know all about Andrei Arlovski’s net worth, there’s a lot to learn from the former UFC Heavyweight Champion.

Here are some of the best success lessons to learn from Andrei Arlovski:

Growing up, Andrei Arlovski had a plan, but switched courses and found himself in the UFC as an adult.

He had been trained in Sambo and was potentially going to be in law enforcement, but started training in many different styles.

This allowed Arlovski to be ready for any opponent, and he ended up winning more matches in the heavyweight division than anybody else.

Andrei Arlovski, plain and simple, loves to fight and earn a living while doing so.

For that reason, Arlovski doesn’t care that he’s not the richest heavyweight champion of all-time, and is happy to just have had so many matches.

While many fighters would be content with retiring in their 30s, Arlovski loves fighting too much, and continued on into his 40s.

There’s no way that Andrei Arlovski would be able to compete into his 40s if he wasn’t taking good care of his body.

The former heavyweight champion knows that proper nutrition and exercise are important, as well as keeping stretched out to avoid injury.

It doesn’t matter if you’re a professional fighter or working at a desk for 10 hours per day, you have to take care of yourself to do your best work.

While the heavyweight division of the UFC might not be the most glamorous, it has made Andrei Arlovski a very wealthy man.

The former UFC Heavyweight Champion has more wins in the division than anybody else, and he’s come a long way from the World Sambo Championship and attending police academy.

With millions of dollars to his name, Arlovski doesn’t need to fight another match in his illustrious career, though he does have a love for getting into the octagon.

As of February 2023, Andrei Arlovski’s net worth is estimated to be $6 Million.

What do you think about Andrei Arlovski’s net worth? Leave a comment below.