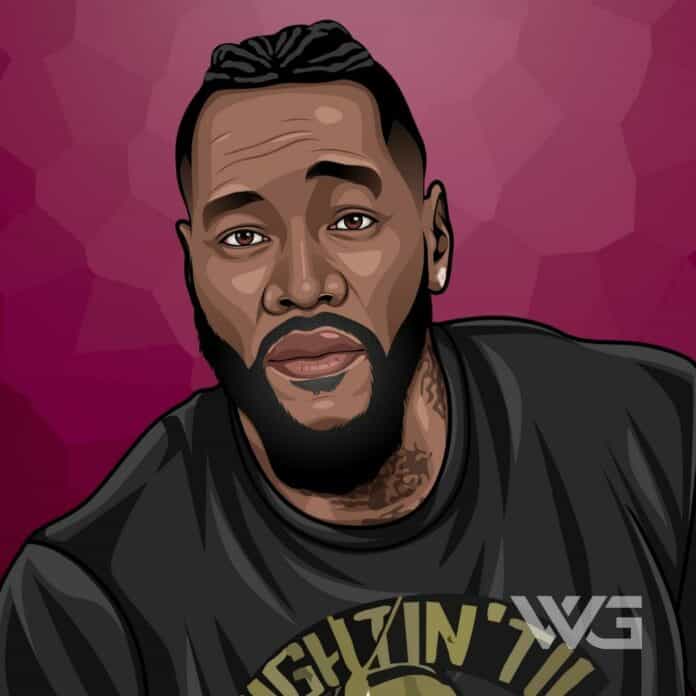 What is Deontay Wilder’s net worth?

Deontay Wilder packs one hell of a punch as the third-best active heavyweight boxer in the world.

While he’s been boxing for nearly two decades, Wilder has shown no signs of backing down anytime soon, so his impressive fortune continues to grow.

As of February 2023, Deontay Wilder’s net worth is estimated to be $30 Million.

Deontay Leshun Wilder was born on October 22, 1985, in Tuscaloosa, Alabama, and he attended Tuscaloosa Central High School, intending to play football or basketball for the University of Alabama after graduation.

However, when his then-girlfriend, Helen Duncan, gave birth to his daughter, she was diagnosed with Spina Bifida, which caused Deontay to attend Shelton State Community College instead, so he could remain close to his child.

During this time, Deontay admitted to falling into depression and even wanted to commit suicide, but ultimately was able to pull himself back from the edge, taking up boxing to help focus on himself.

Deontay started training at Skyy Boxing Gym in 2005, and by 2008 he was competing in the Olympics and making his professional debut.

Wilder’s first professional match was against Ethan Cox at the Vanderbilt University Memorial Gym, and he won in the second round with a technical knockout.

In the next couple of years, Wilder continued to fight his way up the ranks until he earned a fight against former European heavyweight champion Audley Harrison, who he knocked out in round one.

Harrison, who had promised to retire if Deontay beat him, announced his retirement four days after the fight, and Wilder’s fame continued to grow.

From his first fight in 2008 against Ethan Cox until his 2018 fight against Tyson Fury, Wilder remained undefeated, with his first match against Fury ending in a draw.

Wilder earned the WBC heavyweight champion title in 2015 when he defeated Bermane Stiverne and successfully defended his title through 10 consecutive fights until finally losing to Tyson Fury in 2020.

After losing to Fury, Wilder sought a rematch but lost once again, prompting him to take a break for a year before returning to the ring in 2022 to face Robert Helenius.

Deontay Wilder may not be one of the richest boxers in the world, but if he keeps fighting as well as he has, we may see him rise to the top of the list.

Wilder has earned an impressive amount of money from his fights, and we have the details about how much he’s gained over the years.

While he certainly isn’t as wealthy as Floyd Mayweather, he may very well get there if he is able to stay on top of his game.

Deontay Wilder has eight children; his first daughter, who was born with Spina Bifida, he had with his ex-girlfriend Helen Duncan in 2005.

Wilder had two more daughters and a son with his ex-wife Jessica Scales, who he married in 2009 and later divorced.

Currently, Wilder is engaged to Telli Swift, and the couple has one child together.

On his official Instagram page, Wilder often posts photos of his matches, his family, and events that he attends.

Deontay Wilder has won numerous titles throughout his career in the ring and enjoyed more victories than defeats.

However, some of his boxing wins have been undeniably significant and have helped increase his fame and fortune more than others.

Here are the best victories and titles earned by Deontay Wilder:

Deontay must have taken the 7 success lessons from Muhammad Ali to heart because he has certainly risen to become one of the best in the ring.

How Does Deontay Wilder Spend His Money?

Deontay Wilder currently lives in a lavish $1.2 million home in Alabama, situated on the banks of Lake Tuscaloosa.

This 5,600 sqft home features four bedrooms, four bathrooms, a two-car garage, an outdoor kitchen, and a private lift to a fully finished basement.

If that wasn’t enough, the home also comes with a personal panic room and a boardwalk to the lake, which makes this home truly unique.

Deontay is also known to have a stunning collection of the most expensive cars in the world, including a Lamborghini Aventador, a Rolls Royce Phantom, a Hummer H2, a Rolls Royce Cullinan, a Dodge Challenger, and Polaris Slingshot.

Deontay Wilder has reached many remarkable high points in his career.

Although all of his achievements are as impressive as his knockout-to-win percentage, some stand out more than others.

Here are some of the best highlights of Deontay Wilder’s career:

He may not yet be a household name like Mike Tyson, but Deontay Wilder is well on his way!

Deontay Wilder is a natural-born fighter, and he’s often spoken about his motivations and how he approaches every fight.

You don’t have to be a boxer to be motivated by Wilder, and he’s filled with great advice for everyone.

Here are our favorite quotes from Deontay Wilder:

There is a lot we can learn from Deontay Wilder and his remarkable career in the ring.

Now that you know all about Deontay Wilder’s net worth, we can look closer at what he can teach us about achieving our own goals.

Here are some of the best success lessons to learn from Deontay Wilder:

If you try to rush success, you’ll only risk setting yourself back with mistakes.

Good things always take time, so patience is key when you’re trying to hit your stride.

Inspiration can be extremely important for staying motivated.

Whether your motivation to work hard is a personal goal, a person, an object you want to buy, or a place you want to go, using something to inspire you can help give you the extra kick you need to keep going.

When you see someone else succeeding, it can be easy to feel jealous, but instead, you should feel motivated.

If someone else can get ahead, so can you! So challenge yourself to reach their level because you know you can if you just keep working at it.

Deontay Wilder is a true heavyweight champion with 10 successful title defenses under his belt.

While he already has made a substantial amount of money, Deontay is poised to make even more as he keeps competing.

Be sure to check back often to see just how much Deontay Wilder’s net worth will increase!

As of February 2023, Deontay Wilder’s net worth is estimated to be $30 Million.

What do you think about Deontay Wilder’s net worth? Leave a comment below.