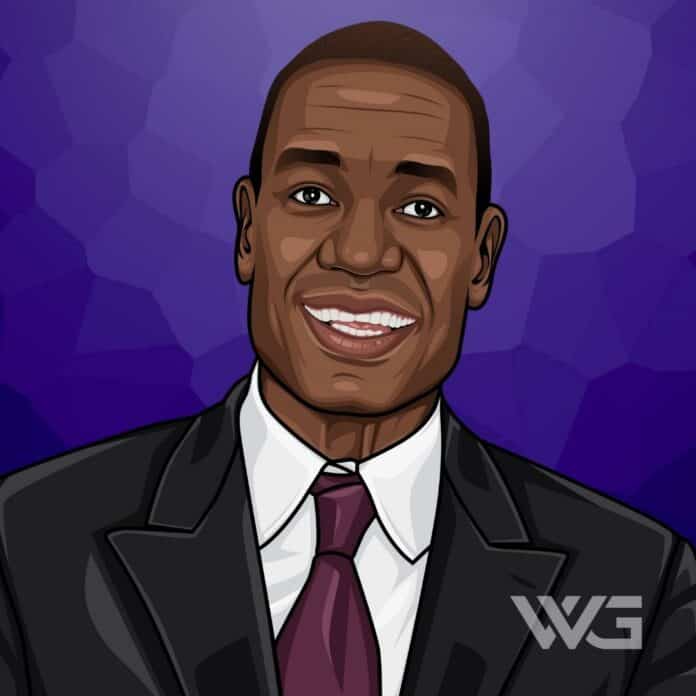 What is Dikembe Mutombo’s net worth?

Dikembe Mutombo is a former NBA defensive player who has used his retirement to further his humanitarian goals.

While he hasn’t played since 2009, he continues to increase his net worth via his foundation and his coffee company.

As of January 2023, Dikembe Mutombo’s net worth is estimated to be $75 Million.

Dikembe Mutombo Mpolondo Mukamba Jean-Jaques Wamutombo was born June 25, 1966, in Kinshasa, the Democratic Republic of the Congo, one of 10 children born to Biamba Marie and Samuel Mutombo.

A member of the Luba ethnic group, Dikembe attended Boboto College for high school, where he specifically studied for a medical career, hoping to become a doctor.

During his youth, he also played football but decided to take up basketball at the prompting of his brother and father due to his tall height.

In 1987, Dikembe moved to the United States to attend Georgetown University with the hope of studying medicine and pursuing a career as a doctor.

However, Hoyas basketball coach John Thomson recruited him to play basketball, and during his first year with the team, he impressed everyone by blocking 12 shots in a single game.

After graduating from Georgetown with a bachelor’s degree in diplomacy and linguistics in 1991, he declared himself for the NBA draft and was chosen by the Denver Nuggets as their fourth overall pick.

Dikembe Mutombo started his NBA career with the Denver Nuggets, and he quickly established himself as one of the league’s best defensive players.

He was selected for his second All-Star game during his third season with the team and earned the NBA Defensive Player of the Year award.

After the end of the 1996 season, Mutombo was traded to the Atlanta Hawks, and Nuggets general Manager Bernie Bickerstaff later admitted that his biggest career regret was not keeping Mutombo on his team.

With the Atlanta Hawks, Mutombo signed a five-year contract for $55 million and, during his first two seasons with them, won the Defensive Player of the Year award back to back.

Mutombo stayed with the Hawks until 2001 when he was traded to the Philadelphia 76ers, and with them, he earned his fourth Defensive Player of the Year award.

Following his first season with the 76ers, Mutombo re-signed a one-year contract for $68 million as a free agent.

Once his contract expired, Mutombo joined the New Jersey Nets but only spent one season with them before moving to the New York Knicks in 2003.

While playing with the Houston Rockets, Mutombo became the oldest player in the NBA, and although he had intended to retire after the 2009 season, an injury forced him to retire early in the year before his farewell tour could conclude.

While he never became one of the richest NBA players in the world, Dikembe Mutombo did very well for himself during his basketball career.

Some of his earnings throughout the years include:

He may not have earned as much as Magic Johnson or Michael Jordan, but Mutombo has certainly earned a significant fortune as one of the most skilled defensive players.

Dikembe met his wife Rose while visiting Kinshasa in 1995, and today the couple has three children and live in Atlanta, Georgia.

In addition to their children, Dikembe and Rose have also adopted four children from Rose’s deceased brothers.

Dikembe was awarded an honorary Doctor of Humane Letters in 2004 by the State University of New York College at Cortland for his humanitarian work.

One of Dikembe’s sons, Ryan, currently plays college basketball for his father’s alma mater, Georgetown University, and his 7 ft 2 in height has made him a promising center player.

Dikembe Mutombo has earned many awards throughout his career and achieved a lot of success on the court.

Despite not being as well-known as Shaquille O’Neal, Mutombo has earned many awards and honors during his 18 seasons with the NBA.

Here are some of the most important distinctions Dikembe Mutombo has earned during his career:

Although this is just the tip of the ice burg regarding Dikembe Mutombo’s awards and achievements, these have been some of the most important during his career.

How Does Dikembe Mutombo Spend His Money?

Dikembe Mutombo has more than enough money to buy almost anything he could ever want, but he spends the most on other people.

In 1997, the Mutombo Foundation started planning to build a $29 million, 300-bed hospital in the Congolese capital of Kinshasa, and since the NBA star had trouble bringing in donations, he personally donated $3.5 million himself.

While the project hit many snags during its construction in 2006, Mutombo donated another $15 million for the hospital’s grand opening.

For the 1996 Centennial Olympics in Atlanta, Mutombo also paid for the Zaire women’s basketball team to ensure that they could compete.

In 2021, he also started Mutombo Coffee, which focuses on coffee production by women growers in the Congo to help them participate more in the international market.

It seems that a lot of what Dikembe Mutombo does with his money is for the benefit of others, and we can’t help but feel inspired by his drive to make a difference in the world.

As one of the most accomplished players in the NBA, Dikembe Mutombo has reached many amazing milestones during his time on the court.

However, some of his highest points have been more important than others regarding their impact on his net worth and fame.

Here are some of the best highlights of Dikembe Mutombo’s career:

Like the NBA players who became entrepreneurs, Dikembe Mutombo has achieved a lot during his career and after his retirement.

Dikembe Mutombo may have earned his wealth from the NBA, but he has since moved on to humanitarian work in the Democratic Republic of the Congo.

Because of his investment in charity, Mutombo has spoken out often about how important it is to give back to the people who need it most.

Here are our favorite quotes from Dikembe Mutombo:

There are many great lessons we can learn from Mutombo’s career in the NBA.

Now that you know all about Dikembe Mutombo’s net worth, we can take a look at what he can specifically teach us about reaching our own goals.

Here are some of the best success lessons to learn from Dikembe Mutombo:

1. Give Back When You Can

If you have the means, giving back to the people who have helped you become successful or even just helping out strangers is a great way to stay motivated.

Not only does giving back make you feel good, but it can genuinely help others achieve their own goals, which is always a positive thing.

Community is important, and many NBA players have worked to help the areas they’ve come from in the past.

This is a great lesson for everyone, no matter how successful you are, because a positive change in your neighborhood can benefit both you and everyone around you.

When you’ve risen to a certain level of success, it’s easy to let it go to your head and corrupt you.

However, no one likes a tyrant or a pompous jerk, and if you’re unable to stay humble, it will only serve to tank your reputation.

Dikembe Mutombo is a former basketball player who has accumulated millions throughout his career and has become well-known for his humanitarian work.

While he may not be playing for the NBA anymore, he’s continued to earn money through his foundation to help improve impoverished lives in the Democratic Republic of the Congo.

Make sure to check back regularly, so you don’t miss any updates impacting Mutombo’s wealth.

As of January 2023, Dikembe Mutombo’s net worth is estimated to be $75 Million.

What do you think about Dikembe Mutombo’s net worth? Leave a comment below.

Kendrick Nunn is a National Basketball Association point guard for the Los Angeles Lakers after starting in the G League.