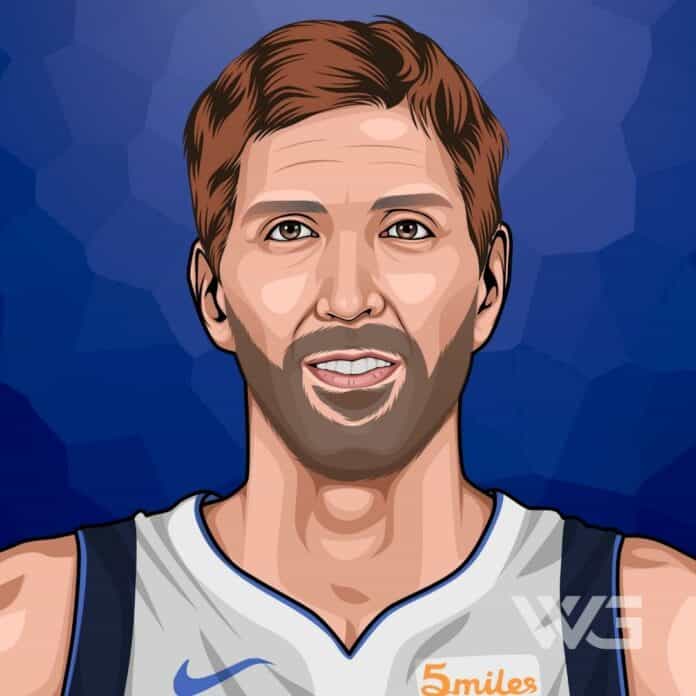 What is Dirk Nowitzki’s net worth?

Dirk Nowitzki is considered by many to be the greatest European player of all time, and his incredible skills have set him apart on the court.

While Nowitzki has been retired in 2019, he is still active in the industry, primarily raising money for charities with his celebrity golf tournament.

While he originally played tennis and handball, his height made him perfect for basketball, and when he was 15, he joined the DJK Wurzburg team.

Nowitzki continued to play with DJK until 1998, when he impressed NBA officials and was asked to declare himself for the upcoming draft.

Dirk Nowitzki was initially selected by the Milwaukee Bucks, one of the richest NBA teams, as their ninth pick in the draft but ended up trading him to the Dallas Mavericks in a multi-team deal.

In 1999, Nowitzki averaged 17.5 points, 6.5 rebounds, and 2.5 assists per game and was voted runner-up for the NBA’s Most Improved Player Award.

Nowitzki continued to improve in the 2000s and was voted into the All-NBA squad’s third team.

Between 2000 and 2010, Nowitzki set himself apart with numerous NBA All-Star appointments, and in 2007 was voted NBA MVP.

In 2010, Nowitzki became the first European player to hit the 20,000-point milestone and earned his ninth appearance in the All-Star Game.

The following year, Nowitzki was named the NBA Finals MVP, having scored 10 fourth-quarter points against Miami during the NBA Finals.

Unfortunately, in 2012, Nowitzki underwent knee surgery that forced him to miss the first 27 games of the season, but he came back, and in 2014, he reached the 10,000 rebounds milestone.

Nowitzki continued playing for the Dallas Mavericks into the 2016-2017 season, where he became the sixth player in the history of the NBA to score 30,000 regular season points.

However, Nowitzki ended up retiring in 2019, but not before setting the NBA record for the most seasons played with a single team and becoming the fifth player in history to play 21 seasons.

Dirk Nowitzki isn’t just one of the richest NBA players in the world, but he was also one of the highest-paid players before he retired.

Although we don’t have information about everything he has earned throughout his career, we do know a bit about his largest gains.

What’s interesting is that these contracts were much less than Nowitzki could have received, but he was notorious for taking discounted contracts to help the Mavericks pursue free agents.

In 2010, Dirk Nowitzki started dating Jessica Olsson, and the couple married in 2012 at his home in Dallas.

Together they have a daughter, Malaika, and two sons, Max and Morris, who he has enjoyed spending time with since his retirement.

Over the course of his 19-year career, Dirk Nowitzki has received an incredible number of awards and honors.

Although all of his achievements are significant, some have stood out more for their prestige.

Here are some of Dirk Nowitzki’s most important career honors and awards:

Despite not being as well known as Michael Jordan in the mainstream, Dirk Nowitzki has earned almost as many awards and honors during his NBA career.

How Does Dirk Nowitzki Spend His Money?

Dirk Nowitzki enjoys a luxurious life, and fans caught a glimpse of his lifestyle when he sold his Dallas home, which he bought in 2020 for $6 million.

If that wasn’t enough, there is also a large glass garden pavilion, five separate living areas, an indoor lap pool, a tennis court, and guest quarters.

We’re unsure why Nowitzki chose to sell the home after living there for only a couple of years, but we’re sure he’s moved into an equally impressive new mansion.

Dirk Nowitzki has reached incredible heights during his remarkably long time in the NBA.

While all of his milestones have been impressive, some have set the course of his career more than others.

Here are some of the best highlights of Dirk Nowitzki’s career:

Dirk Nowitzki has enjoyed an amazing career, and each of these highlights emphasizes how talented and influential he has been.

Dirk Nowitzki is an inspiration to many aspiring basketball players, but even those with no dreams of the NBA can be inspired by him.

Nowitzki has been incredibly open and candid throughout his career, speaking often about how he stayed motivated.

Here are our favorite quotes from Dirk Nowitzki:

There are many great lessons we can learn from Dirk Nowitzki and his 21 years in the NBA.

Now that you know all about Dirk Nowitzki’s net worth, we can take a look at what he can teach us about reaching our own goals.

Here are some of the best success lessons to learn from Dirk Nowitzki:

1. Don’t Give Up When Things Get Tough

It goes without saying that it won’t always be smooth sailing when you’re trying to become successful.

However, if you can weather the storms and keep forging ahead, you’ll be much more likely to reach your goals than those who give up early.

Even if you think you’ve mastered something, there is always more to learn, and you have to keep honing your skills in order to keep them sharp.

Never stop learning and never stop improving if you want to reach your true potential.

3. It’s Okay To Have Doubts

Everyone doubts themselves and their abilities at times, and it is important to realize that while doubts are normal, they shouldn’t hold you back.

Once you’re able to overcome your doubts, you can start fully focusing on reaching all of your goals.

Dirk Nowitzki is one of the greatest NBA players in the world, and he’s made a substantial fortune thanks to his talents.

While he has since retired, his legacy ensures that his wealth continues to grow even though he’s not on the court.

Make sure to check back often to stay updated on any changes affecting Dirk Nowitzki’s net worth.

What do you think about Dirk Nowitzki’s net worth? Leave a comment below.