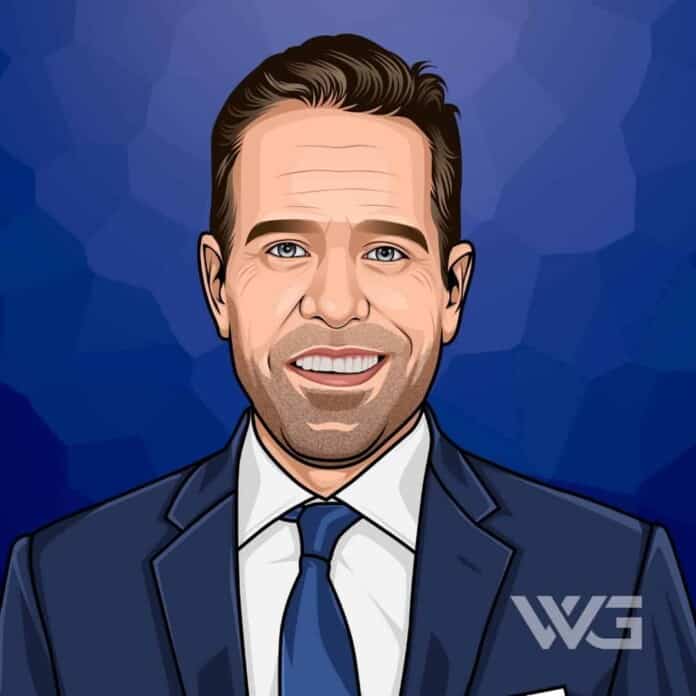 What is Hunter Biden’s net worth?

Hunter Biden is a lawyer and painter. Biden is the second son of U.S President Joe Biden. He is a fund and investor as well. He formerly worked as a banker and lobbyist. Biden was discharged from the U.S. Navy Reserve after he failed a drug test.

He was a founding board member of BHR Partners. It served on the board of Burisma Holdings, which is one of the biggest private natural gas producers in Ukraine.

Robert Hunter Biden was born on the 4th of February, 1970, in Delaware.

Biden is the second son of Neilia Biden and the current President Joe Biden. His mother and younger sister were killed in a car crash in 1972. Robert and his older brother Beau were injured but survived.

Both of the brothers spent many months in the hospital. Hunter and Beau later encouraged Joe Biden to marry again, and Jill Jacobs became their stepmother in 1977.

Biden was born in Delaware, and he graduated from Georgetown University, earning his JD from Yale University. He then decided to serve in the United States Navy Reserve.

Biden worked for Delaware bank MBNA in 1996, where he earned an annual salary of $100,000. He decided to leave MBNA in 2001 to launch a lobbying practice.

Between the years 2001 and 2005, he was a consultant to MBNA. They paid his consulting firm millions of dollars, according to The New York Times. During the same time, his father was senior Senator from the State, and his brother became Delaware’s, Attorney General.

He served as the Vice-Chairman of the National Railroad Passenger Corporation from 2006 to 2009. Biden is the co-founder of the consulting firm Rosemont Seneca Partners. From 2014 to 2019, he served on the board of Burisma Holdings.

In 2019, former President Donald Trump claimed that Joe Biden sought the dismissal of a Ukrainian prosecutor. he was not under investigation, and no evidence was found.

How Does Hunter Biden Spend His Money?

Biden is a big fan of art, and he owns his own art studio in Malibu. It comes with four bedrooms, two bathrooms, and has an open floor plan.

Here are some of the best highlights of Hunter Biden’s career:

“Pain is one of the unavoidable facts of life. We Bidens have had our share. We don’t pretend otherwise. And we don’t pretend that we are different from families all over America that have to face the loss of loved ones or have to deal with the fallout of divorces.” – Hunter Biden

“And this was when he was still in office as vice president, and so he kinda ditched his Secret Service, figured out a way to get over to the house. And I said, ‘What are you doin’ here?’ He said, ‘Honey, what are you doing?’ I said, ‘Dad, I’m fine.’ He said, ‘You’re not fine.'” – Hunter Biden

“Spent more time on my hands and knees picking through rugs, smoking anything that even remotely resembled crack cocaine. I probably smoked more Parmesan cheese than anyone that you know, I’m sure, Tracy! I mean, I went one time for 13 days without sleeping, and smoking crack and drinking vodka exclusively throughout that entire time.” – Hunter Biden

“And I understand that. I mean, I really do. To me, it’s not difficult to explain. Because it came out of real overwhelming grief that we both shared. And we were together and trying to do the right thing. And that grief turned into a hope for a love that maybe could replace what we lost.” – Hunter Biden

“Because I really didn’t. I’m being as honest with you as I possibly can. All I know is that not one investigative body, not one serious journalist, has ever accused, has ever come to the conclusion that I did anything wrong, or that my father did anything wrong.” – Hunter Biden

“I have had no role whatsoever in relation to any investigation of Burisma, or any of its officers. I explicitly limited my role to focus on corporate governance best practices to facilitate Burisma’s desire to expand globally.” – Hunter Biden

Now that you know all about Hunter Biden’s net worth and how he achieved success; let’s take a look at some of the best lessons we can learn from him:

Everybody faces pain. Everybody has trauma.

The single best thing is, family comes first over everything.

Always do what feels best and is essential for you. Don’t care about what other people think.

How much is Hunter Biden worth?

Hunter Biden’s net worth is estimated to be $1 Million.

How old is Hunter Biden?

How tall is Hunter Biden?

Hunter Biden is probably best known for being the son of the current President of the United States, Joe Biden.

Between 2014 and 2016 alone, he earned $6 million from his various income sources, which explains how successful this man really is. He has served on the board of a Ukrainian natural gas company which is the largest one in Ukraine, from 2014 to 2019.

What do you think about Hunter Biden’s net worth? Leave a comment below.