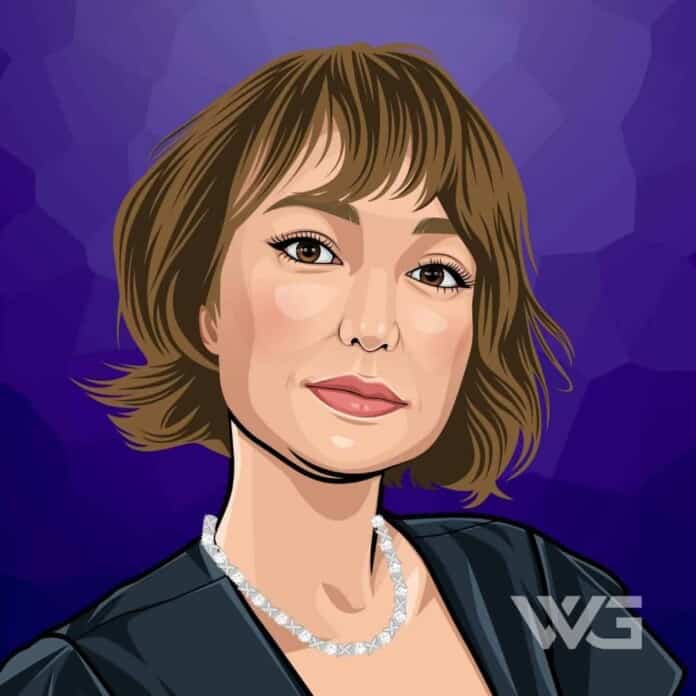 What is Milana Vayntrub’s net worth?

She started off her career as a child actress before she immigrated to the United States. She rose to fame for her appearances in the AT&T television commercials as saleswoman Lily Adams from 2013 to 2016.

In addition to her commercial appearances, she was a series regular on the Yahoo! Screen science fiction comedy ‘Other Space.’ She also had a recurring role on the NBC drama ‘This Is Us.’

Milana Aleksandrovna Vayntrub was born on the 8th of March, 1987, in Tashkent.

When she was two years old, she and her parents immigrated to the United States. She started to act in Mattel Barbie commercials when she was 5 years old.

Vayntrub attended Beverly Hills High School but later dropped out. She obtained a GED and went on to receive a Bachelor of Arts in Communication from the University of California.

Vayntrub then went on to study improv comedy with the Upright Citizens Brigade.

Vayntrub guest-starred in a few episodes of ‘ER’ in 1995.

From 2001 to 2002, she starred in three episodes of ‘Lissie McGuire.’ She made her big-screen debut in ‘Life Happens’ alongside Krysten Ritter, Kate Bosworth, and Rachel Bilson in 2011.

Between 2013 to 2016, Vayntrub starred as Lily Adams in several AT&T commercials. In 2020, she started to play the role again. Stevie Nelson and her launched the YouTube channel ‘Live Prude Girls,’ which was ranked on the 93rd spot on the NewMediaRockstars.

She made some guest appearances in ‘Zach Stone Is Gonna Be Famous, ‘Key & Peele’, ‘House of Lies,’ ‘Californication’ and ‘Silicon Valley.

From 2016 to 2017, she portrayed Sloane Sandburg on ‘This Is Us.’ She also starred in the award-winning streaming series ‘That Moment When’ and the series ‘Threads.

Vayntrub starred in ‘Mother’s Little Helpers’ in 2019. She co-produced the series ‘Kingpin Katie’ and ‘You’re Not a Monster. ‘Making Fun With Akilah and Milana’ was featured on the Comedy Central YouTube channel, and it became a massive success.

She lent her voice to the series ‘Robot Chicken’. As of this year, she played Cecily Moore in the movie ‘Werewolves Within.’ Since then, she has also starred in ‘Can’t Be Saved,’ ‘Teenage Tide,’ ‘Hot Chip’s Hungry Child.’

Here are some of the best highlights of Milana Vayntrub’s career:

“In the ’80s, we were living in the U.S.S.R., where anti-Semitism was a deeply ingrained part of the culture. Being a Jewish person in the Soviet Union was not easy. Not that I remember any of that – I was barely old enough to chew back then – but for my parents, both Uzbekistan-born Jews, life was a struggle.” – Milana Vayntrub

“In the late ’80s, the U.S.S.R. loosened its restrictions on immigration. When the government was like, ‘Y’all wanna bounce?’ my family, along with tens of thousands of other Jews ran for the door in an attempt to make a better life in America.” – Milana Vayntrub

“Every opportunity I’ve had to work and act with incredibly talented directors, like Dean Holland was on ‘Love,’ and the writers and creators of that show, Judd Apatow, Paul Rust and Leslie Arfin, have been incredible learning experiences that have informed my creative process.” – Milana Vayntrub

“The AT&T commercials are the most fun acting opportunity that anyone could ask for. That being said, directing exercises a part of my brain that is really fun that I don’t get to try out as an actor.” – Milana Vayntrub

“I remember what it was like when my parents couldn’t help me with my homework because they couldn’t speak the language, or being a translator for my parents. I did that a lot.” – Milana Vayntrub

“Comedy came early. I knew when I was a kid that I was silly, and I knew that I liked funny people, but I don’t think I knew I was funny. I didn’t really think about it.” – Milana Vayntrub

Now that you know all about Milana Vayntrub’s net worth and how she achieved success; let’s take a look at some of the best lessons we can learn from her:

We’re so lucky to take being alive for granted.

We all have the power to be influencers.

There are moments in your life where you realize you could do nothing, but if you do, you’ll probably regret it forever.

How much is Milana Vayntrub worth?

Milana Vayntrub’s net worth is estimated to be $3 Million.

How old is Milana Vayntrub?

How tall is Milana Vayntrub?

Vayntrub has directed many of the ads. Throughout her career, she has more than 60 acting credits to her name including the films ‘Life Happens’, ‘Ghostbusters’, ‘ER’, ‘Other Space’, and ‘This Is Us’.

This amazing woman is credited as a writer on ‘CollegeHumor Orginals’ and ‘Robot Chicken’ as well as the movie ‘Mother’s Little Helpers’.

What do you think about Milana Vayntrub’s net worth? Leave a comment below.