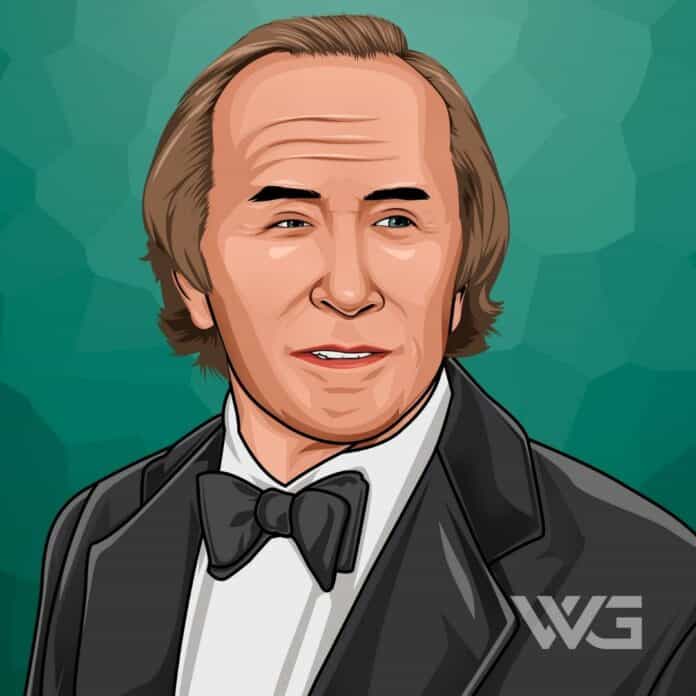 What is Jackie Stewart’s net worth?

Sir Jackie Stewart is a former British professional race car driver for Formula One, who won three World Driver’s Championships between 1969 and 1973.

After retiring from racing, he worked as a television commentator and increased his net worth through several business ventures.

As of November 2022, Jackie Stewart’s net worth is estimated to be $50 Million.

John Young Stewart was born 11 June, 1939, in Milton, Dunbartonshire, Scotland, and was raised in a family of car dealers.

His father and brother were both racers, with his brother Jimmy competing in the 1953 Grand Prix at Silverstone.

Stewart attended Hartfield primary school, and after leaving school at sixteen, he began to work as a mechanic in his father’s garage.

In 1964, he signed with Ecurie Ecosse as a junior race car driver and was offered a spot on the team after impressing owner Ken Tyrell while testing a new Formula Three car.

Jackie Stewart’s career as a professional racing driver began in 1964, moving to Formula One after a brief spell driving Formula Three for the Tyrrell team.

Stewart would go on to win the World Driver’s Championship on three occasions, beginning with his first championship victory in 1969.

Over the course of his career, he enjoyed 27 victories, with his final major victory at the German Grand Prix in 1973.

Following his retirement, Stewart worked as a broadcaster and made many media appearances, including in the music video for the Robbie Williams song, Supreme.

He worked with Martin Scorsese, one of the richest directors in the world, on his biography of George Harrison, a former member of the Beatles.

His impressive net worth was also increased by his brand endorsement deals, including for the manufacturers of some of the most expensive watches in the world, Rolex.

With his string of championship wins during his professional racing career, Jackie Stewart’s high earnings began early in his career.

His earnings escalated after his retirement from professional racing and the Stewart Grand Prix Formula One racing team’s subsequent establishment.

While Stewart is now retired from professional activities, it’s safe to assume his investments and properties continue to bring the former racing star a considerable income.

As one of the richest racing drivers in the world, Jackie Stewart has enjoyed a high net worth for many decades.

His racing career during the 1960s and 1970s saw his value increase significantly, with sponsorships and race victories earning him millions of dollars each year.

His 1999 sale of Stewart Racing to For was worth an eye-watering $140 million alone, significantly enhancing his fortunes.

Jackie Stewart married his childhood sweetheart, Helen McGregor, in 1962, with whom he has two sons, Paul and Mark.

His son Paul ran the race team Paul Stewart Racing, selling the company in 1999, while Mark has worked as a film and television producer.

Jackie Stewart’s impressive career has seen him nominated and awarded many honors and accolades.

His lasting legacy in motorsports as a racer and businessman means his place in racing’s history books is secure.

Here are some examples of the awards and honors from Jackie Stewart’s career:

Few professional race car drivers have had such an impact on the sport that can compare to Stewart’s.

While he is no longer active in Formula One, he remains a relevant public figure and is committed to advocating safety in motorsports.

How Does Jackie Stewart Spend His Money?

Jackie Stewart’s wealth means he can afford the most expensive houses in the world, which includes a luxury property near Lake Geneva, Switzerland.

He sold the Lake Geneva property to Phil Collins in the late 1990s and has resided in his country estate in Ellesborough, United Kingdom, in the years since.

The estate sits close to Chequers, the country residence of the Prime Minister of the United Kingdom.

Jackie Stewart’s impressive career on and off the racetrack has led to recognition from some of the leading institutions, with many high points of note.

He’s earned a fortune comparable to some of the richest athletes in the world and worked as a champion for motorsports safety.

Here are some of the best highlights of Jackie Stewart’s career:

It’s a short list of examples of his many successes that fully justify his reputation and impressive fortune.

He remains a vocal figure in racing to this day so we can anticipate more highlights from Stewart in the coming years.

Jackie Stewart is intimately familiar with the press, with many decades of experience in motorsports to his name and extensive work as a commentator.

As such, he’s spoken about his professional experiences on many occasions, sharing his insights into racing with the public.

Here are our favorite quotes from Jackie Stewart:

Now that you know all about Jackie Stewart’s net worth let’s look at how his life and experiences can influence our success.

From overcoming bullying as a child, he’s gone on to become a world-class race car driver and astute businessman.

Here are some of the best success lessons to learn from Jackie Stewart:

1. Spend Time With The Right People

Jackie Stewart’s rise to fame might not have happened had he not invested the time in building relationships with the right people.

He recommends “soaring with the eagles” rather than “flying with the crows” if you want to achieve success.

2. Build Your Reputation One Step At A Time

Building a solid reputation takes a lot of time, so start working on it from day one and continue developing it daily.

Eventually, your reputation will speak for itself and open the doors to many new opportunities.

First impressions are crucial, whatever your ambitions, so making sure you look the part is the first step to leaving a lasting impression on those you meet.

That wraps up this article exploring the personal life, professional accomplishments, and impressive net worth of British race car driver Jackie Stewart.

Few Formula One drivers have had such a lasting legacy on the sport, with Stewart’s impact extending well beyond his track victories.

Since his net worth may change in the future, we’ll update this article again to ensure it includes all the facts and figures you need to know.

As of November 2022, Jackie Stewart’s net worth is estimated to be $50 Million.

What do you think about Jackie Stewart’s net worth? Leave a comment below.