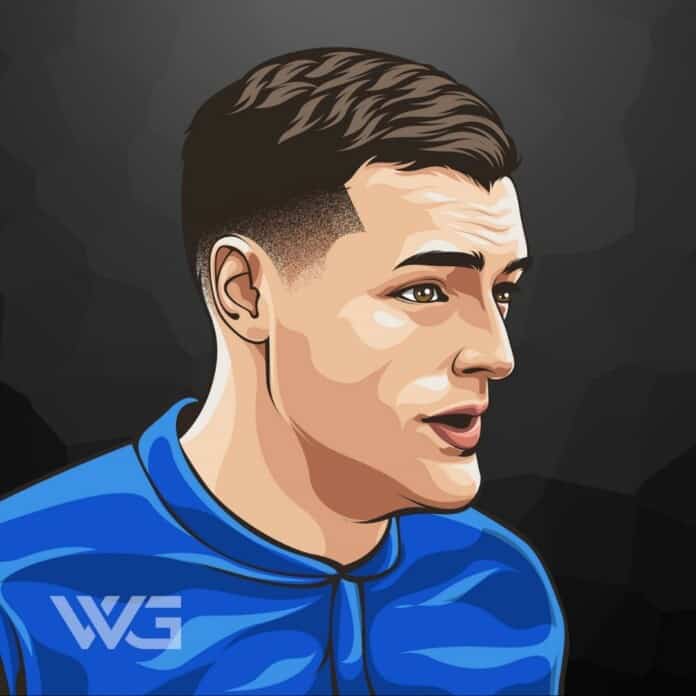 What is Jamie Vardy’s net worth?

Jamie Vardy is an English professional footballer who plays as a striker for Premier League club Leicester City and the England national team. Vardy began his senior career with Stocksbridge Park Steels.

Jamie Vardy was born on the 11th of January, 1987, in Sheffield, England. His father was a crane driver, while his mother worked as a legal secretary. Jamie wasn’t particularly good at academics and spent most of his time playing football.

He wanted to be a part of the local team, ‘Sheffield Wednesday’, but was rejected for not being ‘good enough’. For sometime after that, Jamie had a change of heart and he had decided to give up on his dreams of being a footballer.

In August 2010, Jamie made his debut for Halifax and scored the winning goal for his team. His performance in the remaining matches earned him several honors, making him the wonder boy of the team.

As his popularity furthered, some bigger teams wanted to have Jamie in their side and he eventually went to Conference Premier’s team Fleetwood Town in 2011.

The deal was announced on May 2012 and Jamie signed a three-year contract with the club for a million pounds, which was a non-league payout record. However, his first season wasn’t great and Jamie struggled from bad form throughout the season.

in 2015, he was called to play for the national team and he made his debut in a friendly match in Dublin against the Republic of Ireland.

The following year, Arsenal offered him a record price as they were keen to buy him. But Leicester retained him by offering an even better price. This made Jamie stay back with Leicester.

Here are some of the best highlights of Jamie Vardy’s career:

“Confidence is sky-high, but we’re also all very grounded. We know in football nothing can be taken for granted. That’s why every week as soon as we finish the game if we’ve got the three points we are straight away focusing on the next game and the training that goes into it.” – Jamie Vardy

“When you get into an academy and you are playing football every day of the week that is all you ever want to do.” – Jamie Vardy

“My life has changed, but I’m not money-motivated at all; that’s the last thing on my mind. I just want to play football and that’s how I’ve always been. To be honest with you, that shows in my performances, that I’m in a happy place, knowing that I’m doing the job that I love.” – Jamie Vardy

“There has been a lot of focus on me, I think, obviously, if I let it affect my performance, I have kept my head down and not tried to let it sink in my head and just concentrate, it’s just another game where we wanted to get 3 points in.” – Jamie Vardy

“I never thought I could make it to the Premier League. I just wanted to keep improving as much as I could and see where that got me.” – Jamie Vardy

Now that you know all about Jamie Vardy’s net worth, and how he achieved success; let’s take a look at some of the best lessons we can learn from him:

On that famous night, everyone was rooting for Vardy. Five years ago he was playing in the eighth tier of English football with Stockbridge Park Steels earning 30 pounds a week.

This is the same man who almost four years ago to the day was equalizing for non-league side Fleetwood Town at Gateshead’s International Stadium in front of 768 people.

Today, he had the chance to break a record if he scores against none but the great Manchester United. Every brand has many stories. They are rooted and found in everything. Communicating these stories is vital for the brand as it ensures a powerful connection with the audience.

2. The Value of Humility

Football is a competitive sport where strikers specifically pride themselves in their numbers and records. As Vardy edged closer every day to break the all-time record, he did an excellent job to make friends not enemies.

The same applies to brands. Even if you are absolutely certain that you have the best productservice or you are at the top of your category, what you think of your brand is not nearly as important as what your customers think of it and say about it!

When it comes to brands, communicating your own brand ethos to your audience is as important as understanding why your customers do what they do.

The intersection of these two “whys” is the key to an engaged and loyal following. Many brands we see today have either no “Why” to their existence or have somehow inadvertently sidetracked from it in their communication.

How much is Jamie Vardy worth?

Jamie Vardy’s net worth is estimated to be $12 Million.

How old is Jamie Vardy?

How tall is Jamie Vardy?

Jamie Vardy is an English footballer who has helped his team to win a trophy in 2014 and in the next season, he scored goals in 11 consecutive matches, making himself the ‘Premier League Player of the Season’ and ‘FWA Footballer of the Year’.

By 2015, he had already made his international debut and is now known as one of the lifelines of the national football team.

What do you think about Jamie Vardy’s net worth? Leave a comment below.