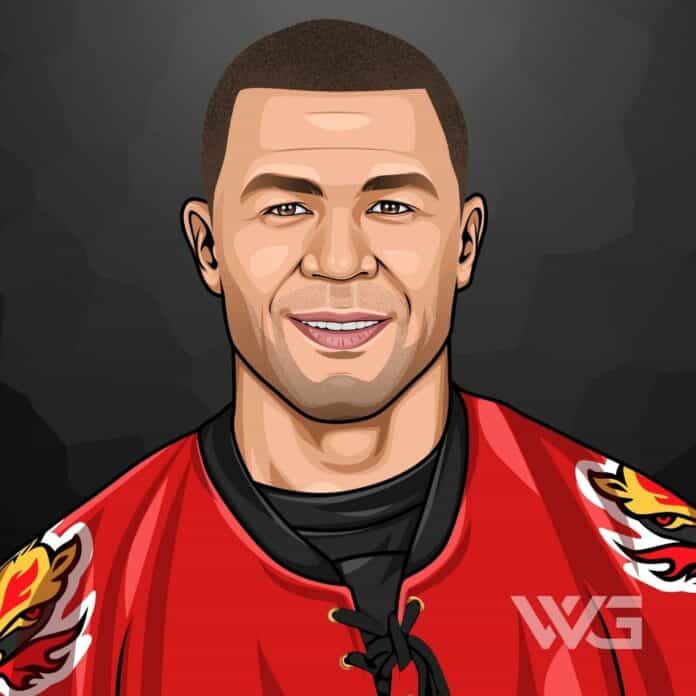 What is Jarome Iginla’s net worth?

Jarome Iginla is a Canadian professional ice hockey player who has won many cups and championships while playing with some of the world’s best teams.

He has served as a captain in many matches and is widely considered to be one of the greatest hockey players of all time.

As of November 2022, Jarome Iginla’s net worth is estimated to be $60 Million.

His father was a lawyer, and his mother, Susan Schuchard, worked as a massage therapist and music teacher.

After his parents divorced, Jarome was raised by hi

s grandparents, playing baseball as a young man in addition to ice hockey.

He credits his ice hockey career to his grandfather, who supported him throughout his childhood and encouraged him to participate in amateur contests.

After playing in the junior leagues as a teenager, Jarome Iginla made his NHL debut in the 1996 Stanley Cup playoffs with the Calgary Flames.

Two years later, he led the team in goals and signed a deal worth $4.9 million, securing his place for the foreseeable future.

In 2003, he was named the team’s captain, leading them to victory at the Rocket Richard Trophy and their first Stanley Cup finals appearance in fifteen years.

Following his successful time with the Calgary Flames, Iginla moved to the Pittsburgh Penguins for a brief spell before moving on to the Colorado Avalanche team in 2014.

On the international stage, Iginla first represented Canada at the 1994 Nations Cup, later rejoining the team for the Winter Olympics, winning the gold medal in 2002 after setting up Sidney Crosby for the decisive goal.

His playing style has been compared to Wayne Gretzky and Pavel Bure, and he is rated as one of the most prominent power forwards in ice hockey history.

Jarome Iginla has enjoyed high earnings throughout his career, taking home a salary of $7 million from the early 2000s through to the mid-2010s.

His earnings have been bolstered with profitable brand sponsorship deals and other business ventures.

With his consistently high salary during his time playing for the Calgary Flames and other teams, Jarome Iginla’s net worth has continued to increase.

He’s become one of the richest hockey players in the world, signing contracts worth tens of millions of dollars.

His absence from the sport means his net worth growth is unlikely to continue at the same pace as at the height of his career.

Jarome Iginla began dating his childhood sweetheart, Kara when they were eight years old, and they have three children together.

His daughter Jade played hockey for the Brown Bears in the NCAA and on the international stage for Team Canada.

While Iginla prefers to remain off social media platforms, his official NHL page covers all his career stats and other information of interest to his fans.

Throughout his career, Jarome Iginla has experienced many successes, for which he has received multiple awards and accolades.

These range from team-based victories in tournaments to personal accolades for his individual contributions to professional ice hockey.

Here are some notable awards and honors from Jarome Iginla’s career:

His impressive reputation means we could well see more honors bestowed upon Iginla as fans carry out retrospectives of his career.

How Does Jarome Iginla Spend His Money?

With tens of millions of dollars to his name, Jarome Iginla has the funds to invest in an impressive real estate portfolio.

He owns property on par with some of the most expensive houses in the world, and sold a house in Calgary for $3.9 million.

The 5,000-square-foot home, with a modern design and large windows lining its front, featured multiple bedrooms and bathrooms.

With a track record comparable to some of the richest athletes in the world, Jarome Iginla has plenty of successes to shout about.

He’s helped his teams win many victories and trophies, as well as using his wealth to improve the lives of the underprivileged.

Here are some of the best highlights of Jarome Iginla’s career:

It’s an impressive list of highlights that Iginla has worked hard to achieve, inspiring up-and-coming ice hockey players to deliver their best performances.

While he has taken a back seat as an ice hockey player, his legacy in the sport is well and truly secure.

Throughout his career, Jarome Iginla has conducted many interviews with the media and discussed his thoughts on professional ice hockey.

This includes sharing his insights on his playing style and his hopes and ambitions for his professional future.

Here are our favorite quotes from Jarome Iginla:

Now that you know all about Jarome Iginla’s net worth let’s dive into some amazing lessons from his career.

He’s played for some of the most iconic hockey teams in the world, with an admirable commitment to honing his skills and becoming the best he can be.

Here are some of the best success lessons to learn from Jarome Iginla:

1. Always Have Time For Your Fans

While some famous athletes and celebrities have a reputation for being rude to fans, Jarome Iginla is the exact opposite.

He’s known for being incredibly kind to fans, even booking a hotel room for fans at the Olympic Games when he found out they were sleeping in their car.

Iginla began his career playing in goals, believing he wasn’t fast enough to play in a more aggressive position.

He soon overcame his doubts about his abilities and went on to become a hugely successful goalscorer.

With his impressive net worth and fortune, Jarome Iginla could easily have chosen to sit back and lead a life of luxury.

Instead, he prefers to donate considerable sums of money to charity and help those worse off in his community thrive.

So there you have it, our article exploring the professional career, net worth, and charitable works of iconic ice hockey player Jarome Iginla.

He’s established a solid reputation both on and off the rink, dedicating time and resources to championing those less fortunate than himself.

While he no longer plays professionally, his net worth may change in the future, so be sure to check back on this article for the updated version.

As of November 2022, Jarome Iginla’s net worth is estimated to be $60 Million.

What do you think about Jarome Iginla’s net worth? Leave a comment below.