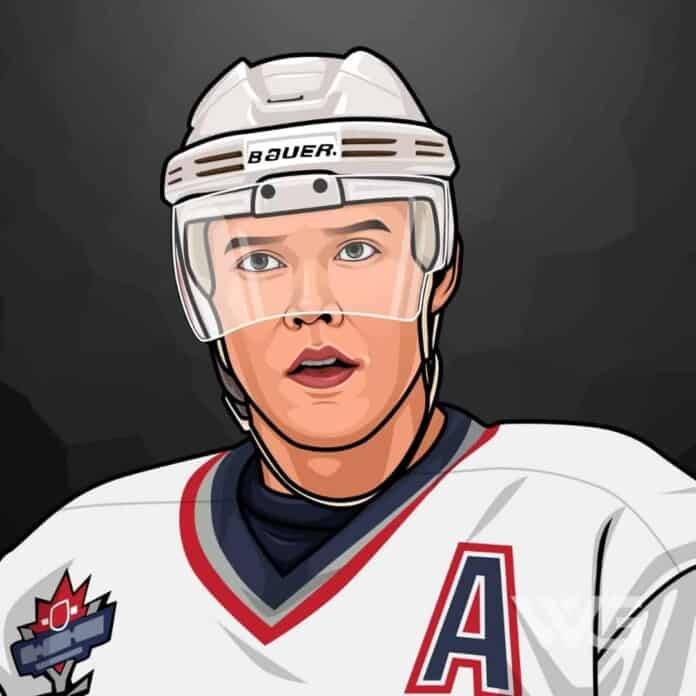 What is Pavel Bure’s net worth?

Bure was nicknamed “the Russian Rocket” for his fantastic speed. He played for 12 seasons in the NHL with the Vancouver Canucks, the Florida Panthers, and the New York Rangers.

Trained in the Soviet Union, he played three seasons with the Central Red Army team before his NHL career.

As of December 2022, Pavel Bure’s net worth is estimated to be roughly $70 Million.

Pavel Vladimirovich Bure was born on the 31st of March, 1971, in Moscow.

When he was 12 years old, his parents separated, and he remained with his mother. Vladimir Bure, a Russian swimming legend, had dreams of Pavel becoming a professional swimmer.

When Bure was 11 years old, he was named the best forward in his league.

In 1982, he was selected as one of three young Russian players to practice with Wayne Gretzky and Soviet national goaltender Vladislav Tretiak in a taped television special. By the time he was 14 years old, he was named to the Central Red Army’s junior team.

When Bure was 16 years old, he started to play professional hockey for CSKA Moscow.

He was invited to the senior club’s training camp for the 1987–88 season. Although he was deemed too young, and not yet ready, for the Soviet League, Bure earned minimal playing time filling in for absent regulars.

In the 1989 NHL Draft, William Houston of The Globe and Mail wrote, “The best of the group is Soviet star winger Pavel Bure, a spectacular player with outstanding speed. He is compared to Vladimir Krutov and the late Soviet superstar of the 1970s, Valeri Kharlamov.”

The NHL organizations were afraid he would not leave the Soviet Union to play in the NHL, thus deterring teams from selecting him early. However, scouts and analysts believed he could have been selected as high as the second round had he defected.

His debut with the Canucks was delayed until a month into the 1991 – 1992 season. He got a lot of attention in Vancouver. His first practice with the club in 1991 was attended by approximately 2,000 fans.

As of 2o21, Pavel Bure’s net worth is estimated to be roughly $70 Million.

How Does Pavel Bure Spend His Money?

Pavel Bure spends some of his money on real estate.

Here are some of the best highlights of Pavel Bure’s career:

“Was long time ago. But, yeah, it was pretty difficult, eight years ago. It was something which you don’t do every day. Now seems so easy, you know, European players, Russians just come by ticket, sign a contract and go. And my time, when I came over, I was still a little different. Different rules, different laws. Different.” – Pavel Bure

“That’s why it was so difficult, you know, because I went to play in the NHL right when Soviet Union break down, and it was a very thin line between [emigrating to North America] legal and illegal.  They could call it illegal movement or legal.” – Pavel Bure

“It’s not best time for Russian hockey these days, because all the talent and good players wanna play the best league in the world which is NHL . . . If they could sign a contract with NHL team, obviously they’re gonna move away from Russia.” – Pavel Bure

“You know, for now, I just wanna concentrate on hockey, and that’s what I love to do, that’s what I’ve been doing all of my life, and hopefully I can do it much longer. I don’t wanna spread out myself, you know, or think about business.” – Pavel Bure

“What started? I don’t know, and I don’t know what started. I think it even started before I even met Anzor. When I was playing Vancouver and one day, I got like twenty phone calls from all over the world, and people were asking, Are you alright? And I’m just like, Yeah, I’m okay. And they said, Well, it’s like everywhere your car got blown up.” – Pavel Bure

Now that you know all about Pavel Bure’s net worth and how he achieved success; let’s take a look at some of the lessons we can learn from him:

Being happy never goes out of style.

All you need in this life is ignorance and confidence; then success is sure.

All your life, you will be faced with a choice. You can choose love or hate.

How much is Pavel Bure worth?

Pavel Bure’s net worth is estimated to be $70 Million.

How old is Pavel Bure?

How tall is Pavel Bure?

Pavel Bure is a retired Russian professional hockey player. Bure played for the Central Red Army team before being drafted into the National Hockey League in 1989.

In 2015, he retired due to knee problems. Bure was a right-winger who played in the NHL for 12 seasons. He was known as “The Russian Rocket”.

As of December 2022, Pavel Bure’s net worth is estimated to be roughly $70 Million.

What do you think about Pavel Bure’s net worth? Leave a comment below.